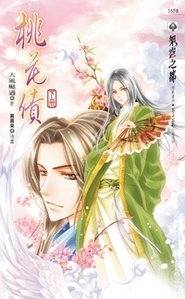 Status in Country of Origin. One entry per line
78 chapters

Who was the other’s calamity, who owed the other a debt. The matter of thousands of years past was but a wait for chance meeting.

The prime minister’s son Song Yao was infatuated with the top courtesan Yao Xiang, but Yao Xiang found true love in a poor scholar instead. Through an opportunity presented by fate, Song Yao who was in despair mistakenly ate an elixir pill and became an immortal.

In heaven, because of the affair between Tian Shu Xingjun and Nan Ming Dijun, they were punished to the human realm by the Jade Emperor. Jade Emperor then appointed Song Yao Yuanjun to go down and break up the two. Song Yao’s close friend Heng Wen Qingjun also followed him to the human world, only to meet his destined partner.

On earth, Song Yao became the son of a vassal king, forcefully taking the frail scholar Tian Shu Xingjun into the king’s residence…… The past incarnation’s entanglements, causality of reincarnation. Song Yao played the role of a connecting bridge in other people’s love story, certain that he himself was destined to be alone forever.

These are recommendation lists which contains Peach Blossom Debt. You should give them a visit if you're looking for similar novels to read. Alternatively, you can also create your own list.
More Lists >>>

Ah I was really curious about this story since I actually liked san sheng san li. I'm not really sure about the whole plagiarism saga but I'm not going to go into that. The premise of this book was really interesting, with MC trying his best to make things hard for tian shu but not really succeeding. For those curious, yes ML is ... more>>
Spoiler

MC actually fell in love at first sight with ML like thousands of years ago but due to his destiny being destined to be alone, he didn't dare to say anything. MC needs like 1000 hugs.

[collapse]
There's more to meet the eye on why MC is chosen to carry out the punishment and fate is a big thing here where a debt from a previous life can carry over and tie people together. I just want to rant on the plot here:
Spoiler

So MC accidentally got tangled up in the fate between tian shu and nan ming (hence leading MC to rise to the celestial realm due to that tied fate) hence in an attempt to save MC, tian shu actually suggested sending MC to the mortal realm, starting this whole plot, instead of the jade emperor just smiting MC. So many stuff happens and there's a fox demon who love ML and all and then towards the end of the love trial, ML kind of goes berserk?? And more stuff happens and fox saves ML, losing his own cultivation and bam MC is stuck with child version of ML and tian shu and has to take care of them for a few days in the mortal realm. That part was actually really cute where MC has a habit of sleeping with ML but as a kid, ML doesn't recognise him, so was like 'why are you getting into my bed?' then when MC finally got his own bed, ML is the one who comes and wants to sleep with MC. Anyway, so they return to heaven eventually and MC has to be punished because of all the havoc he created. He also finds out that by letting the fox demon near ML, they too have their fate tied together. MC's like, I'm really destined to be alone and at that point, I really wanted to smother MC with love. So due to MC's debt to tian shu, he gives TS his immortal core thing since tian shu's own was broken and before he could really die, he decides to give his remaining powers to the demon fox (who lost his own cultivation and was like a normal fox) and tells the fox everything about ML like how he doesn't like sweets, and tells the fox to take care of ML. MC wanted to see ML one last time before he dies but doesn't want to do so in his real form so he borrows the fox form to visit ML and in his mind tells ML how he loved him for thousands of years (CRIES!!!!) then MC leaves when ML is sleeping, escapes back to the mortal realm to die, thinking it's for the best that ML does not see him die so he won't be that sad. Just as his soul starts to scatter, he thinks he sees ML beside him and thinks that it must be illusion but it was nice to have that illusion. So ML actually realised what was happening when MC left the celestial realm, rushes over, sees MC dying and kind of loses it. Long story short, he gathers MC remaining soul and like somehow brings it back to the reincarnation cycle and MC spends decades reincarnating from small to bigger live forms and ML is always there too. Eventually becomes a human again, accidentally eats another elixir pill, ascended AGAIN, finds ML and says he owes ML and will take forever to pay him back, indicating their fate is now tied together and ML's fate to that demon fox has already been returned by MC so ML doesn't owe the demon fox anything then HE. Omg the ending bit where the angst just slowly ramps up starting from the children form bit WAS SO SAD

[collapse]
Read the spoiler only if you want to know the whole plot. I just wished there was more like maybe a bit more of ML POV or something. <<less
24 Likes · Like Permalink | Report

Ahh, I've wanted to read the translated version since I speed-watched 10 Miles Peach Blossom which was stated to have plagiarised this novel (no offence meant to 10 Miles fans). Previously, I only got to read the spoilers, which already fed my imagination, now I finally got to read this, thanks to dear translator! Thanks for the translation, they're wonderful! ;3
17 Likes · Like Permalink | Report
Leave a Review (Guidelines)
You must be logged in to rate and post a review. Register an account to get started.

This time… Let's try not getting...