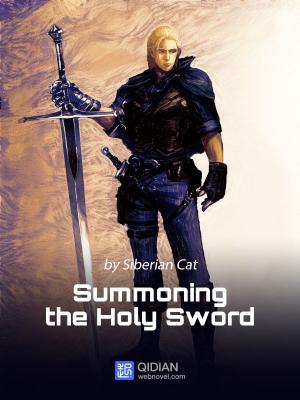 Status in Country of Origin. One entry per line
1380 Chapters (Completed)

During this chaotic era, the darkness engulfs all.
In a struggle of fire and death, despair shrouds the continent.
The line between fantasy and reality becomes blurred as a speckle of starlight penetrates the night sky.
But is it enough to reverse the downfall and fate? To regain the lost glory?

Rhode is a famed player in the game “Dragon Soul Continent”. There, he leads the strongest player guild in the game, the Starlight Guild. Just as he defeats the last BOSS, the Void Dragon, he unexpectedly awoke in a world identical to the game.

As the Summoner Swordsman returns to the continent, waves will be cast in the rivers of fate. Can he face the coming chaos and avert the destruction of the continent?

One entry per line
StHS
召唤圣剑

These are recommendation lists which contains Summoning the Holy Sword. You should give them a visit if you're looking for similar novels to read. Alternatively, you can also create your own list.
More Lists >>>

It's a nice novel in the beginning, kinda similar to The Amber Sword and Advent of an Archmage, with decent worldbuilding and kingdom-building chronicles, but all of this quickly goes to sh*t when parallel world plots and time-travel is introduced.
Actual rating 1/5, but am eating rice, so 3/5 Now, time travel and parallel worlds are interesting devices if used well, except that the author has no idea what he's doing and handwaves it all away, leading to plotholes, buttholes and other holes. I'm serious. All the novel focuses on is... more>> sex. The MC recreates his childhood friends, former guildmates etc as spirits/sexbots and proceeds to f*ck the living daylights outta them! It's frankly disturbing. To add insult to injury,
Spoiler

his sister reveals herself as the supposed villainous dragon but with a disturbing brother complex and incestous s*x ensues. This isn't even the main plotline

Ugh I want to like it but I can't. The reason I can't like it is because of the way the author always over glorifyling the MC. The author make it seems like the MC knows everything and best at everything because he's a high-level online game player and a guild master. The author also make every other character beside the MC useless just to glorify how awesome our MC is.
14 Likes · Like Permalink | Report

after binge reading for 15+ days I have to admit, the ending is open, but it is for the best. I don't like it, but it is for the best. As usual, with the snowflake of characters, it is impossible to write down everyone's end. The author is humorous and enjoys putting puns, parodies, sarcasms and jokes to which I like them. I read out of curiosity and stayed for the s*x scenes, the open ones are nicely done, no P and V words though. Though of course as usual... more>> the character development for most are done in a rush, those that are nicely done flow nicely and no abrupt stuff. The fight scenes are initially welldone, but coming to the end feels sloppy. The interactions with MC and his harems are work, sex, understand, sex, though half of the said harem did not go through the baptism that is sex. <<less
11 Likes · Like Permalink | Report

My review is biased because I have read too many novels from the same genre So far just a generic transmigrated to game world cliched shite. Translations done at Qidian is praiseworthy but the novel in my opinion is a waste of time if you have already read any transmigration or vr novels. Harem makes it worse I'm sure of it as harem rarely goes well anyways.... more>> If you are a new reader to this genre I highly reccomend you to read this. The plot armor of the main character is way tooo much!
Spoiler

So Here we have a dude who gets transmigrated to the game he is playing after getting defeated by a dragon... The dude falls outta the sky and a passing by flying ship just takes him in and treats his wounds.... no questions no suspicions just heal the dude who falls outta the sky without any benefits or anything. Then we see the MC is not the dude in the game as he is now the real life version (weak, pale, skinny...) or so it says cos, they get attacked by some flying dudes and this dude just defeats them easily... wow op af I guess... the dude is cool headed which I liked in the beginning but no then he becomes a emotional traditional horny dude later on. Anyways its just another cliched harem incest fking in the broad daylight novel.

In this brilliant new story we are following... more>>
Spoiler

Rhode the top player who was one of the strongest players

[collapse]
What awaits us in this story is an unexpected (nope totally expected) transmigration to another world. With a exclusuve class of summoning and
Spoiler

[collapse]
as a starter. This novel is straightforward and a decent one out of many of similar genre. You feel the op of the MC from the start and as of now it's a good read. Recommendations: 4.5/5 Translation quality: 95% perfect. Main characters party:
Spoiler

Promising story, yet fact that author sometimes *forget* his own setting/rules destroy it all. Let's look at simple but crucial in "game" genre EXP. MC is only player in party, so he should get full share of exp (as NPC's take 0%), yet after literally days of grinding mobs his lvl remain the same. Then again, protagonist winning 1v1 against 40lvl, while himself being at 10, explain everything.
4 Likes · Like Permalink | Report

The process leading to this review:- I have read until the latest free chapter, and I can safely say that you shouldn't expect a Chu Feng in this novel. MC isn't exactly an 'Everything according to keikaku' character either, with him relying more on his knowledge of the future instead of his supposedly abilities as the no. 1 player of the MMO game he has been transported into. But what makes me go is the fact that there is no sign at all that the tags I mentioned above are true. There is no sign that MC is going to have an incestual relationship, and it seems that MC is more in danger of being raped then being the rapist himself. Only the polygamy thingy seems to be close to the mark, but some of the characters here doesn't subscribe to 'Sharing is Caring' mentality... Is this worth buying SS? Definitely a NO!
4 Likes · Like Permalink | Report

Not too bad of a story, but I agree with a prior reviewer that the author made out everything to make the MC be the glorified genius and kills off anyone even remotely close to his level of skill or knowledge. So I can understand why some people won't like it. That being said, the translators did a wonderful job, the story is well written and I found myself enjoying both the story and the combat sequences-to a degree. Not the best I've ever read, but certainly better than most.
2 Likes · Like Permalink | Report

Despite the insipid info dumps, the world is well built. However, the MC is just a moron who likes to act cool and thinks he is smart. He is not (maybe the author thinks he is as he gives lame ass interpretations for his actions). The author seems to have no EQ and the characters are thus extremely immature, which is what detracts from the otherwise decent story. I would have been fine if the MC was a self-righteous youngster who is still working things out, but the problem is that... more>> the rest of the characters in the story all seem to think highly of his buffoonery, which makes me feel like I am reading the mind of a creative 13 year old. Characters are unique but their relationship with the MC ruins everything. <<less
1 Likes · Like Permalink | Report

The worldwide construction, the characters and everything else are great, but with each part that the novel progresses, you realize that Rhode is an arrogant little shit, who ends up having everything very easily. The harem is even worse, but if you're new to reading this kind of easy romance, I recommend it.
0 Likes · Like Permalink | Report

I enjoyed it for what it was but to be honest. The main char while being fun till this point has finally gotten on my nerves. To be fair my last straw was this was this chapter... more>>
Spoiler

His teammate gets taken over by a mind demon cause he decides its great idea to not tell his teammate I'm not bringing you along cause theirs a Mind Demon up ahead. He tells them to instead go get supplies for them and leaves them at the Inn. Few hours past they aren't back so they go look for them and now its the teammates fault for being worried about the main char. Just ugh.... They should suffer in their head for being taken over without even knowing the damn thing was in the forest when they looking for him.

[collapse]
Tl/dr Main char is a guy who can't do wrong and is never at fault even when at fault. <<less
0 Likes · Like Permalink | Report

Dropped, the info dumps were way too much.
Every. Damn. Chapter. Random lore explanations for everything, and for nothing. Basically half or less of each chapter is actually useful, the rest added way too detailed explanations that won't matter anyway. I felt like reading a game guide, not an actual story.
Also, MC seems to be cool headed, but isn't very bright, just super knowledgeable about the game and very OP thanks to the game system.

The MC was playing a game and then got transferred to the game world. The MC was one of the best players and he knows pretty much almost everything that is going to happen. So expect vast knowledge of people, places, and events that he will use to his advantage and get ahead of everyone
0 Likes · Like Permalink | Report
Leave a Review (Guidelines)
You must be logged in to rate and post a review. Register an account to get started.

reincarnated as a hive mind

The Shoggoth Who Loved Me
Advertisement