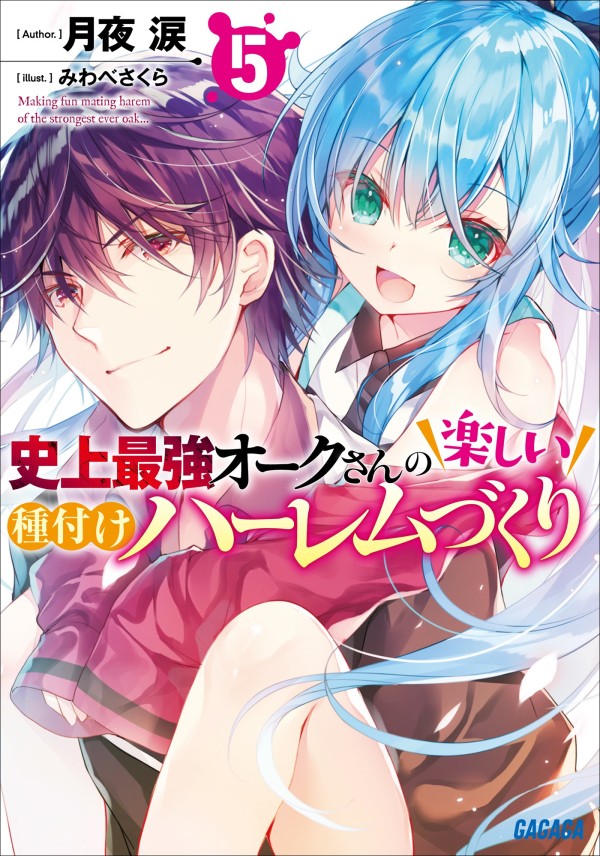 Status in Country of Origin. One entry per line
5 LN Volumes (Ongoing)

The history strongest reincarnated orc being unrivaled and making harem!

Ork was reincarnated as the son of a female knight and an orc.
Because he was born similar to his mother, he got bullied in the orc village.
That Ork was awakened to the strongest bloodline from his encounter with a beautiful elf.

Because he was born as an orc――

he wanted to do it with beautiful girls!

He wanted to be lovey dovey with girls every day!

To make women wanted from the bottom of their heart to be embraced by him, he had no choice but to be a strong orc!!

Through this and that, Ork obtained the strongest power in history and began his journey to create his harem.
Using the power that he had obtained, Ork mowed down all the obstacles during his journey, climbed up in the world, and made love with beautiful girls one after another――!

Slime Reincarnation. A Great Sage Is Being Hugged Tightly By His Elfin Foster Daughter (Shared Universe)

Even If I’m Reborn as a Cute Dragon Girl, I Will Still Make a Harem (1)

These are recommendation lists which contains Shijou Saikyou Orc-san no Tanoshii Tanetsuke Harem Tzukuri. You should give them a visit if you're looking for similar novels to read. Alternatively, you can also create your own list.
More Lists >>>

Firstly, it's translated by Saint BakaPervert, so that's that. Now, about the novel itself. Although, the male protagonist is OP, s*upid, and the plot is cliché. But, he is not Dense, he is not spineless and he is a dedicated harem seeker. Yes, he's perverted, but he is an orc, so that kind of makes sense. Most important fact of all is, this protagonist wants a harem, he has a male reproductive organ (unlike most Japanese MC), and he wants to actively use that male reproductive organ to impregnate his harem members. This... more>> quality is enough for me to read and enjoy this novel while ignoring all the s*upidity or whatever plot holes that may exist in the novel.
I find this a whole lot logical than being a pervert, having a harem, but not having the guts or desire to even touch them. But, that's not all!
The protagonist is also a gentleman, he has a code! He will not push down anyone who doesn't want to be pushed down by him from the bottom of their hearts!
Yes, our protagonist is a hopeless romantic!
In a word, you either love it or you hate it. <<less

It is decent, but the MC is really dumb. Dude comes trying to kill him, he beats them then lets them go, they brings a bigger disaster, he almost dies and repeats. There is a lot of "I have killed a lot" and will do this and that to save this and that, but he conveniently avoids that. He is a hypocrite, with Hero/child's mentality. ... more>>
Spoiler

[collapse]
Although he is not dense, with all the bullsh*t that he does he is not far from it. The MC is bearable for the first 2 Volumes but at V3 it just gets worse that is where I had to stop. The first Volume is decent, the 2nd Volume is just below average. The third one is 0-star. <<less
5 Likes · Like Permalink | Report

This sh*t is good ngl. Now what's so special about it. I'm not sure. But one thing I can tell is that it's super enjoyable. That's all that matters isn't it. The plot isn't that unique nor the world setting. Characters though are quite decent. MC is likable & funny. Girls are cute & those illustrations are god tier. Interactions are kinda confusing yet sweet sometimes. Overall a pleasant read. The author is a renowned one. I think this series could progress pretty good with the given plot too. Action scenes r decent... more>> imo. I can imagine countless bigger picture for future. P.S. Massive respect to translator Bakapervert, He's OP af. Our dude literally translated 3 volumes alone in a single month. Thank you baka. <<less
5 Likes · Like Permalink | Report

the first 2 volumes are surprisingly good, but then the author decided to turn the whole story into raw hentai cringe fiesta, had to drop it in the middle of princess arc: MC rushing to save the elf village from the invading army is being jerked off by a princess while they are running - are you serious? I'm not against descriptive s*x scenes but they should be well placed and shouldn't ruin the flow of the story, bringing it to the level of a mindless doujinshi Pros -MC that knows what... more>> he wants -above average world building compared to other isekais Cons -MC is a wuss when it comes to killing his enemies and always waits until things spiral out of control and only then deals with consequences - out of place s*x scenes that ruin the flow of the story - all harem candidates have the same personality <<less
2 Likes · Like Permalink | Report

Just a few things that bother me with this LN, and it is just some strange verbage as the story I like and the Main Character is competent and actually can think himself out of paper bag where most MCs can't. My one gripe is that he speaks eloquently 95% of the time, yet when he talks about finding a woman for his harem or talking about his women he sounds like a caveman. "Who want to be pushed down by me" And as others have said he is an Orc he... more>> shouldn't act like a spineless JP who can't kill. Heck he was brutally trained for 5 years which was equivalent of 15-20 years overall. <<less
1 Likes · Like Permalink | Report
Leave a Review (Guidelines)
You must be logged in to rate and post a review. Register an account to get started.

Dungeon Survival: I can see the...