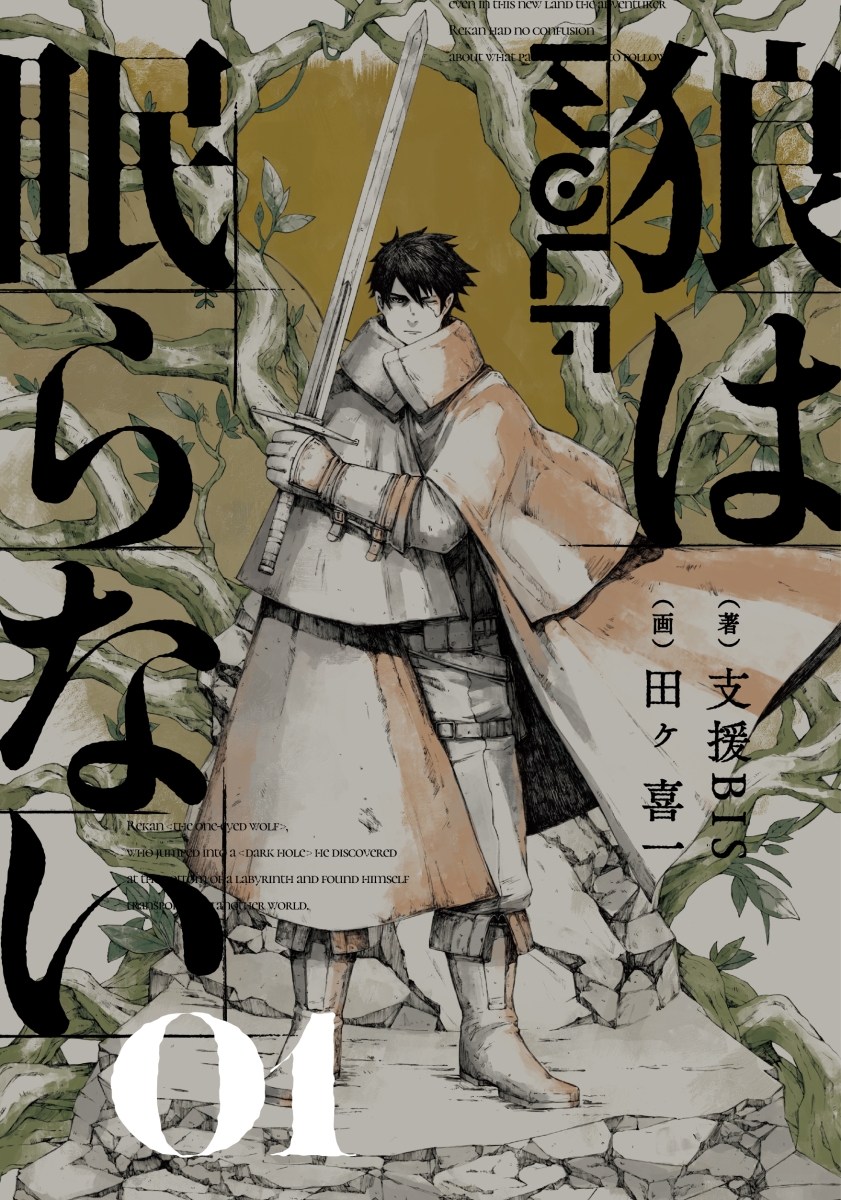 Status in Country of Origin. One entry per line
579 Chapters (Ongoing)

One-eyed Wolf Lecan is a skilled adventurer who has conquered many dungeons all over the world. He had been going solo for a long time, but in the last three years, he’s had a partner. That partner jumps into the black hole together with Lecan, and both go their separate ways as they fall into another world. Dungeons and magical beasts also exist in that world. After learning the native language, Lecan goes on a journey. Meeting a good teacher, Lecan studies medicine making and magic under that teacher, and begins his dungeon explorations for real.

One entry per line
The Wolf Won't Sleep
狼は眠らない

These are recommendation lists which contains Okami Wa Nemuranai. You should give them a visit if you're looking for similar novels to read. Alternatively, you can also create your own list.
More Lists >>>

I'm enjoying it but it's beginning to drag and I'm wondering if/when Lecan is ever going to remember Rubi exists and realize what situation she's probably in.
0 Likes · Like Permalink | Report

I like how this novel is slow paced and it's relatively easy to understand how he got his powers, and how he learns new things. All in all, a great novel to read in my past time, and a nice pace for how the story is progressing, with the background of his world compared to the one he is currently living in. I also like how there are no love interests, and no harems, makes it sound like the man will put his name down in history for something other... more>> than his HAREM. Also, I browsed the manga raws. Let me take a moment to say he looks cool. <<less
17 Likes · Like Permalink | Report

The beginning was really great, but becomes stale real fast. At first Lecan was learning his new world fast and moving on to explore the world, but once he meets up with Shira and Eda, all that stops. He decides to settle down because of Eda and has not left to explore other regions.

The author keeps teasing us with Princess Ruby and the necklace she gave him, but we get nothing out of it. 12 Volumes in and Lecan lost all interest in everything outside the scope of Eda, tied down like he has children to babysit or something.

I can't help but feel that the story has not progressed ever since Princess Ruby left and just became another generic SoL.

This one's pretty chill read with a bit of spice. It's really rare to have an MC who doesn't have young mentality for an isekai. The MC is a very strong battle-scarred and battle hardened veteran adventurer but also not too OP. He is flawed character who also makes mistakes but mostly badass. I'd say he's similar to Guts (from berserk) in aura. The story is chill but not boring, and sometimes wholesome. The world building is well written and I liked the way we learn new things together about the... more>> world with the MC. I liked the subtle way some rpg elements were implemented. Action is good, just pure badassery. There's also good character developments and some wholesome moments which I liked. <<less
11 Likes · Like Permalink | Report

i consider that this literature's world building as the strongest aspect. Unlike many other transmigration works, the author build his world very detailed. And I really like that.
7 Likes · Like Permalink | Report

It's very interesting and somewhat unique story, but for whatever reason author decide to enter harem route at around volume 40 which I personally hate.
6 Likes · Like Permalink | Report

Really, really nice to see a story where the protagonist isn't a herbivorous Japanese boy or a s*x pest. Shame the MC is a flat and boring individual who seems to barely care if he lives or dies. It's readable, enjoyable and kinda refreshing, but I wouldn't call the MC mature so much as he's more like a block of wood that just sort of floats down the river, letting the currents take him. 7/10 because it's nice to see something different than the barrage of samey~ isekai adventures we've all read... more>> before at least a million times, even if it's lacking purpose and emotions spicier than milk. <<less
5 Likes · Like Permalink | Report

The action scenes seem to be good. The MC seems to be quite strong, but has limits and doesn't really seem obnoxiously overpowered. Overall, this seems to be written very matter-of-factly, which I'm not a huge fan of. The translation quality is OK, but it could use an editor or a proofreader, particularly the earlier chapters. Overall, I'd say it's good, a solid read, but not great.
5 Likes · Like Permalink | Report

A well written story about a peak level adventurer get sucked from one fantasy world into another, each world with slightly different physic engines. For a hulking slab of bloodlust meat, Lecan is an interesting and developing character who gets to enjoy a slightly slower life in this other world. Would reccomend.
1 Likes · Like Permalink | Report

Don’t know where to start on why this novel is extremely bad, I’ve read Chinese novels that are way better than this. You can skim through most chapters and not be lost or miss any important details at all, that’s how useless most of the dialogue and such is in this novel. All the chapters on magic/medicine are boring and easily skipped since it’s useless. Doesn’t help that dungeon exploration is dreadfully dull. The interactions of the characters are painfull, The medicine teacher tells him to do something and he does it like... more>>
Spoiler

teaching an annoying idiot girl magic when he doesn’t want to.

[collapse]
Thought it would be and exploring novel yet he has yet to leave this town other than going to a boring dungeon. <<less
0 Likes · Like Permalink | Report

Will change my review if the author brutally murders this annoying character (you'll know when you find her). I cringe every time this character says or does anything. Have never understood why you have to go and ruin a perfectly good story with Jar Jar's. From a solid 7/10 to 0/10. Could have handled it for a couple chapters, but he just couldn't help himself and had to bring the character back as a, at this point seemingly permanent fixture.
0 Likes · Like Permalink | Report

I've spent about two and a half days straight (with food and sleep breaks of course) to finally read through every translated chapters. Haven't got hooked up by a light novel like this for a while now. WORTH IT!
0 Likes · Like Permalink | Report
Leave a Review (Guidelines)
You must be logged in to rate and post a review. Register an account to get started.