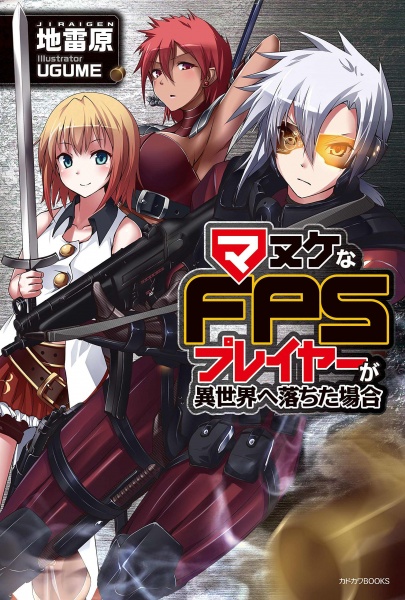 One entry per line
UGUME

Status in Country of Origin. One entry per line
307 Chapters (Completed)

The protagonist is a player of a VRMMOFPS game who ends up falling off the map while playing in PvE mode, and ends up being transported to a fantasy world with his FPS system.

These are recommendation lists which contains Manuke FPS. You should give them a visit if you're looking for similar novels to read. Alternatively, you can also create your own list.
N/A

Whatever happened in chapter 64.... well, it seemed to be jokes inserted by tl? meant to be invisible as the text was white, but because I use some addons to change colors on the pages I read, I got that mixed into it.. it may potentially be removed at a later point, for all I know. Anyways, the story suffers quite a lot from nonsense... the concept is interesting, but the execution is garbage.
1 Likes · Like Permalink | Report

Its a fun story where the MC is suddenly in another world as his online game character into a world of swords and magic, it is later explained why he was sent there.
Spoiler

An evil god wanted to turn him into a dungeon master so he would be bound to the dungeon and to make him kill people, but a goddess stops it part way informing him of his death on Earth and allowing him to read the messages his friends sent before telling him he cannot return but, is allowed to live freely with his character's ability.

[collapse]
He is not invincible and cant use magic but takes full advantage of his system. I like this novel a lot but, its just my type and I wont say it is perfect but if it sounds like you might like it give it a shot.
21 Likes · Like Permalink | Report

[Note up to chapter 13]
A story about a FPS player that gets transported to another world, but retains game elements. I think if you're here from recommendation of Arifureta, or other 'gun totting' based LN, Its worth the read. Still, there's a lot of world building, and we'll see how it goes.
19 Likes · Like Permalink | Report

Grammar: 2.5/5
Story: 2.5/5
Writing: 2.5/5 First, I would like to state my initial impression of this series: About average. With that out of the way, Grammar is pretty hard to get around with this series. I understand that translating from one language to another is very difficult, and even professionals (With full publishing companies behind them) tend to make a mess of things. There are multiple contextual differences that just can't be bridged without a deep explanation or having been personally immersed in. Second, the story is a bit lacking in... more>> all areas, it's interesting enough to keep your attention, but not enough to make rereading it enjoyable. Lastly, the writing... I'd actually say that the writing is below average, but the author tries to color in as much of the world as he can. Unfortunately, the writer does not provide enough color. He does not let you experience the environment in any real way, only stating that he is in a cave with a curved wall on one side of the entrance, not even indicating which side. There are no real descriptors given for the environment, you're left to just use your own imagination to put the world together instead of being shown the author's world (which is exactly what writing a story should). If the translator takes on an editor, I feel that there would be a marked improvement to the story itself, and I would not be above the translator taking some liberties to add some color to the story. This series is best for a back burner when you've run out of everything else to read and just want some gun-wielding action in a fantasy setting. (Also, I'd ignore that "Multiple Personality" Tag... Nothing as of yet has even remotely shown a hint of personality let alone multiple personalities.) <<less

Such a shame this Web novel has 300+ chapters and only 18 are translated. Kinda makes me want to study japanese and translate this but I already have enough on my plate as it is to learn a new language and have a translating schedule. Tbh I just hope AI translators get better so we never have to deal with a translator dropping an awesome series before it's finished. If you enjoyed Gun Ota, GATE and Magic Bullet in Magic land then you will love this series though at this point... more>> I'd recommend following the manga rather than the WN because the manga at the very least is still being updated and has now surpassed the WN translations. <<less
6 Likes · Like Permalink | Report

completed +300 chapters but translators have dropped it 2 years ago. "VR based on fps" that is on COD Advanced Warfare style (which was a failure), MC said that it was the most popular game (5 mi) but he spent quite time playing PVE, whatever, beginning was like puting modern soldiers against roman empire soldiers.
6 Likes · Like Permalink | Report

It's okay, I guess. But it instantly went down for me because of the bullsh*t "I don't want people to know about my power and skills so I'm hiding it because it's troublesome" every. F*cking. Isekai. Protagonist do this shit. I'm currently at chapter 42, but I can already guess the end. In the end, his abilities will still be revealed, right, no matter how he hides it. Then people will be shocked and glorify him. Then, like a good Japanese man that he is, he'll still be humble as... more>> f*ck that he'd rather be mocked and looked down on because people knowing how powerful he is would be "troublesome"? That's one bullsh*t feast right there, man. <<less
2 Likes · Like Permalink | Report

I read the entire thing through the raws. The story is good but the translation has people complaining how different it is from the raws and how the translator is unreasonable. Depends on whether you compare it to other translators who give you broken up chapters once a week and take eternity to complete one chapter and charge for it or this translator who can actually do a full one from ncode syosetsu once every week or fortnight and deserve the patreon page compared to other translators who do not... more>> deserve to be the translator for the stories. Personally the translation is great. But the author vs translator is just... why?Its all been done so I dont get it. If you read the raws you'll understand there are virtually no flaws. Also GT is annoying for grammar. Just pointing that out if you read it and don't understand the raws that way. <<less
2 Likes · Like Permalink | Report

Pretty much a story you'd pick up to kill time. It can be enjoyable but tbh I found the character developent a bit shallow. The translator was also pointing out that there were better guns to be used in other situations and that some of the things the author writes may be inacurate so I wouldnt suggest gun fanatics to read this I guess. Storywise eh... pretty much cliché with most of its bases and OP protagonist bcus guns. It would have been better if the author wrote in a way that... more>> helps readers connect and pace it out better but eh. You dont miss out anything if you dont read this honestly. Its pretty much just meh. Like Im upset about how the author wrote it since I feel disconnected from everything and there were several ways to make it all better and I wanted to somehow relate with even the main protagonist. But really in terms of immersion you dont get much which is sad since the FPS system he works with is pretty interesting and I would have liked to see a more developed and relateable main protagonist. Although the author tries to make it seem like the protagonist's thoughts are pretty deep, as the reader we dont feel any of that profoundness. Like Im not given a set up that makes me feel this guy's dilemma its just mentioned and told to you in a sort of disconnecting way that somehow when you see him doubting himself or something similar you would just ask why would he even have that kind of thought? Or isnt this development way too fast? Overall I expected much from it but was disappointed. <<less
1 Likes · Like Permalink | Report

I tried reading this cause it's somewhat the same as the " Magic Bullet in Magic Land", with all the modern armaments and stuff about it being from a game or something.. but.. I'm kinda disappointed on how it was delivered, like reeeaaaally.. "In depth explanation/discription on every little thing can ruin the mood that you wish to show in a story" I wanted to read it, but I really can't dive into.... aaaarrrgghhh!!
1 Likes · Like Permalink | Report
Leave a Review (Guidelines)
You must be logged in to rate and post a review. Register an account to get started.

The CEO and His Little Bunny