Novel Updates
RegisterLogin
Theme
Search
Your changes has been saved.
Advertisements
Even the Villain Has a Story

Home >
Novel >
Even the Villain Has a Story 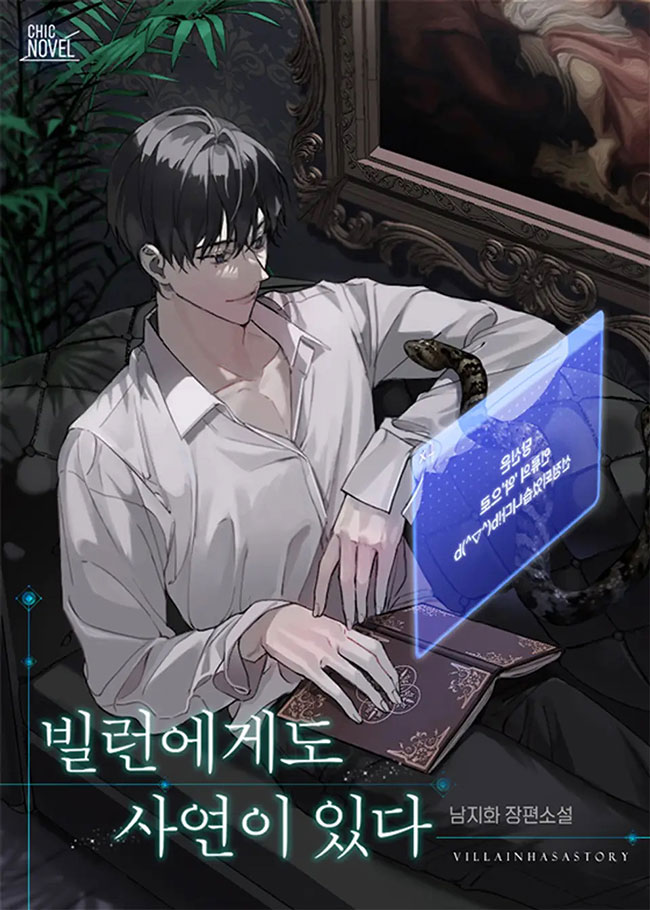 One entry per line
남지화

One entry per line
Letter

One entry per line
Chic Novel

One day, a gate opened and the world fell into chaos. At the same time, Sayun came face to face with a strange system window.

[You have been chosen as the ‘evil’ of mankind. (b ᵔ▽ᵔ)b]

Sayun, going crazy after being forced to play the villain, kidnaps Han Geonjoo, the key to escape the system.

“By kidnapping them? I guess you’re from a gangster guild.”

It’s the key to escape the system, “The Resistance” and Sayun is trying to activate it by maintaining a close relationship with Han Geonjoo by raising him to an S-Class.

Sayun complimented Geonjoo and raised his stats to the fullest. However, when Geonjoo almost became an S-Class, he disappeared.

As soon as he became an S-Class hunter, he appeared in front of Sayun.

“What are you doing?”

“Do you think it’s okay to throw people away like that?”

Who threw away who first?

“If you want to know how it feels to beg, go somewhere else.”

A gate which shows signs of collapsing and an uneasy reunion. Will Sayun be able to escape the system?

The Huntress, Your Knight Next Door (1)
The S-Classes That I Raised (1)
My Younger Brother is a Hero (1)
Trapped in a Webnovel as a Good-For-Nothing (1)

These are recommendation lists which contains Even the Villain Has a Story. You should give them a visit if you're looking for similar novels to read. Alternatively, you can also create your own list.
More Lists >>>

The summary of this story seems like a honest promise. I'm all for traumatized characters, but our despairingly unfortunate MC became a sociopath out of that circumstance. It's the character settings the author propped him up with, and it's interesting as it is refreshing. This is perhaps the first ACTUALLY villainous MC; loose, uninhibited but surprisingly remorseful to an extent. His persistence and bratty "childish" behavior are charming. Also, the cherry on top for our villainous MC, is the small inconsistencies in his 'character', like trying to alleviate his wrongdoings by... more>> doing charity work. The author doesn't just spell it out for the readers, the first few chapter has enough to draw us in to sympathize with the unfair situation. I especially love the dynamics featured thus far. The only definite con is the inconsistent updates, definitely leaves this reader out to dry, longing for more. Otherwise, the translators are doing their best. <<less
1 Likes · Like Permalink | Report

The MC Sayun is forced by the system to commit crimes and villainous deeds everyday, like killing high-ranked Awakened, to act as the villain of the world. This is because Awakened are there to "save" the world from monsters, but Sayun has been chosen by the system to be the "villain", meaning that he is there to accelerate the world's destruction.

Sayun can't even die, since every time he dies, the system resurrects him into like a few hours/days? (I forgot) beforehand. Initially, he tried to resist the system's missions, which resulted in his death (from the mission failure penalty), so the system would revive him and force him to do stuff. Now, he's like completely numb to committing crimes and killing people and finishes the missions, since he knows resisting that way won't work.

(I know I wrote a lot about the missions, but the main focus of the story is on Sayun's and Han Geonjoo's relationship)

So for Sayun to free himself from the system, he needs to find and raise someone with either of 2 attributes (I forgot the names). Han Geonjoo has one of the 2 attributes, and Sayun finds him outside the Awakened Registration Center, where he's scanning ppl's info panels for one of the 2 attributes. Geonjoo was there because he was a new Awakened.

So he kidnaps him and brings him back to the Night Rats guild, where Sayun is the guildmaster. The Night Rats specialize in crime/information gathering/assassinations/etc.

Sayun treats Geonjoo better than others, since he's the key to helping Sayun escape the system, and Geonjoo notices and wonders why. Later, Sayun just says to think of it like he's in love with him to shut him down quickly when he brings it up.

I'm on chapter 46, around halfway through part 1 of the novel, and they've gone to, like, 2 gates so far: 1 C-rank gate and 1 S-rank gate. The pace might seem a little slow, but it doesn't feel like it, with their interactions.

Still inside the S-rank gate. Sayun is giving special (harsh) training to Geonjoo.

It's currently one of my favorite stories that I am reading on Ridibooks and I'm so glad it finally got to Novelupdates! The Protagonist Sayun has a sad backstory and is your typical cold, overpowered protagonist. The story will emphasize on this a lot during the beginning which is pretty hype imo! During the story he will see his ups and downs so you can brace yourself for some suicides to come (can be read in the spoiler if wanted). As well as some character development! To be honest its... more>> giving me some Omniscient Reader vibes, but only very slightly, since Sayun is not Kim Dokja and has different ambitions. I can only say to give this a try and experience for yourself! Heavy spoilers ahead!!
Spoiler

Sayun will meet a boy named Noah in the field dungeon. The boy has a lot of similarities to Sayun so Sayun is seeing himself in the boy. Which is further amplified by the boy also being the `true evil of mankind´ from the old world which is now a dungeon. Sayun kills Noah to put him to rest so that the boy does not have to go through the same sh*t he has. Geonjoo who grew attached knows nothing about their dilemma and thinks Sayun killed Noah out of his cold heart. This will be the point where Geonjoo seriously starts to plan an escape from Sayun. Later on when he does Sayun will be downgraded which leads him to loose the chase with Geonjoo. From here it will be a big down point which was very sad to read through (a lot and I mean A LOT of suicides). Thankfully, the second key makes an entrance and things go up again! There will also be a short meetup with Geonjoo, but Sayun is dying so he won't know. So far I really love the story!!