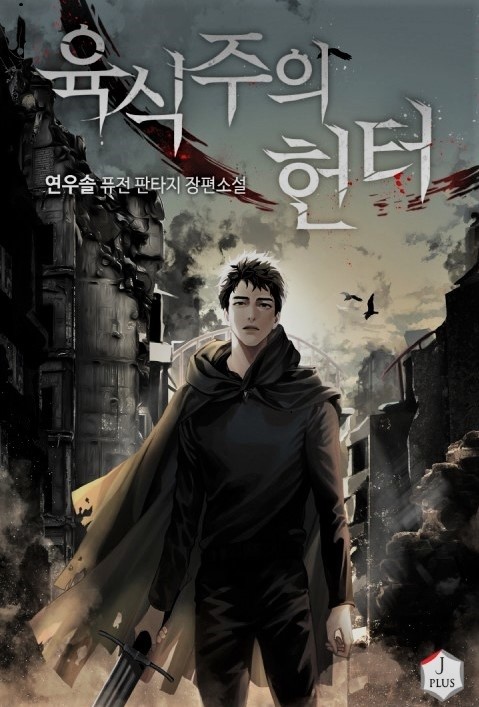 Status in Country of Origin. One entry per line
209 Chapters (Completed)

One entry per line
J Plus Media

There are holes in the sky, in the sea, and in the ground all over the world.
From the hole came all kinds of monsters that could not exist in the world.
The world was destroyed, and people with special abilities appeared.
Survivors who survived hid all over the world and lived like bugs.

And the ability that I was given in that hellish world.
It was to rob the other awakeners of power.

These are recommendation lists which contains Carnivorous Hunter. You should give them a visit if you're looking for similar novels to read. Alternatively, you can also create your own list.
More Lists >>>

Hot damn this is some good shit. It’s a mature and unique story. It takes admittedly cliched elements but executes them in a completely unique and well thought manner. The main character is a very mature and determined character with a clear goal and clear morals. He isn’t hypocritical, in fact he admits that his actions may seem hypocritical while understanding that he has no control over that.
The main character has a devouring ability, but that in and of itself isn’t what makes him so powerful. Rather it’s his... more>> capacity to plan for contingencies and plan for the future resolutely. His power does bring with it a lot of interesting growth that I don’t think will dissapoint. Also this story isn’t a lone wolf story, his enemies are so strong he realizes he needs competent comrades despite how strong he already is. All in all, a highly recommended story with a prolific translation team. Definitely the creme of the crop of stories being translated right now. <<less
0 Likes · Like Permalink | Report

I usually only rate novels after 100+ chapters but since this one is very short at only 209 chapters i'll do it now... It's a pretty interesting novel, not a new concept but still a very well executed story line. I would say it's a typical Koran weak to strong novel so you can expect the same trends: OP protag, no romance, lots of battles and a few others. Overall it's a very good novel saddly it won't be getting a 5* because it does what every other koran novel does, even... more>> though it's at a really high level it's not something new. <<less
0 Likes · Like Permalink | Report

Looks great! While the vast majority of Korean novels I have read have been fairly bland, this one is an exception. Most KR novels I have read tend to have extremely simplistic prose. Something like "I walked along the footpath. I saw a dog. It was large." This novel seems to be better in this regard. Too early to make a proper conclusion though. It also feels like the author is trying to build up a proper world, though at Chapter 14 it's still too early to tell how it will turn... more>> out. The power system might also be interesting. Give it a read and see how you like it! <<less
6 Likes · Like Permalink | Report

I'm not really good at giving reviews but this novel is worth the read and i'll stick it out till the end. Its a fast paced story (200 chapters) but it doesn't make you feel like it is when you're reading it. Well written story with a likeable MC and side characters. Tbh I didn't think I was gonna like this because I prefer to read game element novels but it got me hooked straight away. I won't say its the best thing I've read but it was good enough for... more>> me to read all the available chapters in one sitting. Although I liked the MCs personality from the start I was glad when (SPOILER)
Spoiler

[collapse]
It came out of the blue but it works better for this type of story. <<less
2 Likes · Like Permalink | Report

So not my cup of tea so to speak. Very post apocalyptic And some spoilers for those that really want to know.... (but I only read to chapter 13....) ... more>>
Spoiler

So it's a post apocalyptic world like the blurb said... and there are 'cities' which apparently everyone wants to get citizenship to join in....

And the MC can absorb other awakeners abilities when they die next to him/he kills them.

The MC was supposed to be a 'guide' that led awakener groups around... but honestly I wasn't feeling that impressed with any of it.

But I only read to chapter 13 so I'm not going to rate it... it might improve a lot later on... but me personally...I'm just not feeling this storyline.

Great Novel. Contrary to the stereotype relating to such a title, the MC doesn't mindlessly kill people to absorb their ability. He possess a generally good moral though if situation comes to push, he's not afraid to get himself dirty. He makes great effort of not harming those unrelated to those he deemed as threat or hostile. He only possess one goal which is to survive but he also not afraid of helping others to survive. Unlike those common tropes where he vowed to survive and proceeds to ignore everyone... more>> else. <<less
1 Likes · Like Permalink | Report

A very grounded post apocalyptic story with the usual discrimination and survival. I actually like this, though I do hope there's no romance here. I'll give it five stars because it deserved it. Opinion may change in future chapters, but as of now, it's quite different from other novels so I'll take it.
1 Likes · Like Permalink | Report

Good so far. The summary worried me because the MC has the ability to steal awakening powers, which seemed like a setup for the whole, morally ambiguous loner type of novel. However, the MC seems polite, practical, and relatively moral for living in the dystopia. No romance as of yet, which is nice.
1 Likes · Like Permalink | Report

Enjoying the novel so far, a bit too early to really tell. Pretty grounded and well written story. Post apocalyptic survival. Unlike most novels of this type the humans are basically juuuuuust scraping by. Monsters are much stronger than usual. There is a relatively small number of relatively weak super heroes keeping humanity afloat. Our MC makes a living guiding the Awakeners to hunt monsters. Turns out (Dun Dun DUN) he awakens himself, and gains a potentially game breaking power. Abilities shown so far are by and large on the low end.... more>> You get one in a variety of categories and it's like "physically stronger" or "imbue electricity" but people are still basically meat bags that die left and right. The writing/translation are both good, there is a lot of detail and world building. Not much humor but not terribly dark either. MC is a loner but doesn't seem too extreme in his personality in any way yet. Which is nice! I would recommend reading a couple of chapters and see if you like it. <<less
1 Likes · Like Permalink | Report

Not really a power fantasy trip, but there is that scratch sometimes. There is some interesting plot twists on the traditional genre that can be turn on for some, not me personally, hence the 4 stars. Translation is also very good so far. Can certainly recommend it
0 Likes · Like Permalink | Report

Not really a big fan of the MC's abilities getting revealed right away, I was hoping that he could keep it a secret, I was interested at the start but there's some part that I didn't quite like. The one thing that really bothers me is his ability getting revealed but other than that its okay (for me anyways). I'll continue to read it later on and see if there's anything else good or bad.
0 Likes · Like Permalink | Report

A very post apocalyptic setting, where while the premise may seem cliche, it is executed pretty well. Although that does mean get ready to read blocks of world building, but most of the time it's rather relevant and lays the land pretty well. The world setting gets fleshed out pretty quickly, describing the monsters and how society has developed in this post apocalyptic world, in what I feel is a rather probable way. The protagonist isn't an absolute psychopath either, which in my book is a plus! Although for quite a while... more>> he is a loner, he eventually does get comrades in this dog-eat-dog-world that are rather likeable. All in all I think this novel is highly underrated and I hope you enjoy this as much as I do if you decide to give it a read. <<less
0 Likes · Like Permalink | Report
Leave a Review (Guidelines)
You must be logged in to rate and post a review. Register an account to get started.