Novel Updates
RegisterLogin
Theme
Search
Your changes has been saved.
The Empress Returns 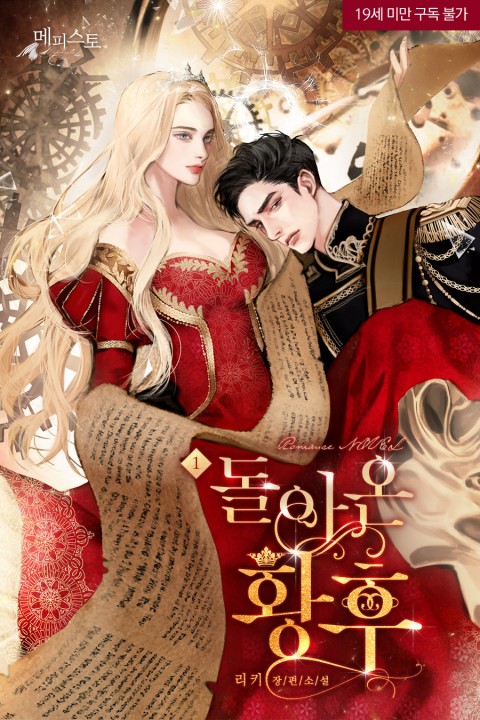 One entry per line
riki
리키

Status in Country of Origin. One entry per line
3 volumes (completed)
Split in translations

One entry per line
Mephisto Publishing

When the Arpen Empire decided to no longer wage war, small countries nearby could finally breathe. But this peace was meant to be shattered, for soon after, envoys were sent to each country issuing a golden decree to each of the royal families.

“To establish an alliance with the Arpen Empire, each kingdom must send a princess to become a Crown Princess Candidate. The princesses will undergo six months of training to divide them into those who have the potential to become empress and those who will be concubines. Any kingdom disobeying the imperial edict shall be seen as enemies and their access to the River Judith’s stream will be blocked.”

“The God of Judith” was an age-old love song that had been sung from generation to generation. The ballad passed from the grandma’s lips to the little girl’s, from her to another, and another… etching a place in time. But this was no tale of admiration and envy, for all whose ears it reached agreed that the God of Judith was foolish.

Standing by the banks, a woman gazed at the River Judith before her… where the god may have stood thousands of years ago, her hand resting on her heart, a suffocating feeling clutching at her.

“The god isn’t the only one who’s foolish… Humans are the same as well… You and I.”

Viola’s long-cherished dream was not to marry and be someone’s wife but be hailed as the queen of the Kingdom of Koronis. She longed for the crown, even more after losing her only flesh and blood in the war. Once a half-royal, she struck a deal with the king to restore her status. It was a political marriage to the Crown Prince of the Arpen Empire.

“I’m going to be a queen, and I will take my identity back.”

These are recommendation lists which contains The Empress Returns. You should give them a visit if you're looking for similar novels to read. Alternatively, you can also create your own list.
More Lists >>>

From reading this I think it had a good premise at the beginning. Like the FL is bad ass and I love how skilled they made her. The thing I heavily disliked is how naive they made her. She just married him without looking into him LOL. Believing he's a knight and not the crown prince. I- than the ML he always peer pressures her into the more intimate moments. And don;'t get be started on how he manipulates. I honestly expected the story to go another route than what... more>> they went with. I hope she kills him LOL <<less
4 Likes · Like Permalink | Report

It's okay. It's using the usual plot devices like secrecy, lack of trust, dubious consent, political intrigue of sorts and emotional drama without much novelty, thereby making the novel feel a little flat. It's not totally unreadable, though -- the smut is hot and the plot is intriguing and promising, but the storytelling is a bit meh.
1 Likes · Like Permalink | Report

It started off as a good novel but the FL is giving me a headache with her "I hate you but I love you" attitude.
Spoiler

spoiled myself to read latest chapters and it confuses me how they could snu snu right after they kill all the knights with her in the same place they kill them. Even as far as declaring that he no longer loves the FL but can't get enough of her.

We have a lovestory with revenge (more or LESS), a bit of mythology... Not so bad. But the dynamic between the main characters sucks. I'm curious to know how the legend came true and what about her revenge !The translation is excellent; To read without waiting for a masterpiece!
0 Likes · Like Permalink | Report
Leave a Review (Guidelines)
You must be logged in to rate and post a review. Register an account to get started.