Novel Updates
RegisterLogin
Theme
Search
Your changes has been saved.
The Demon King’s Daughter is the World’s Strongest but a Shut-In! ~Shut Herself in an Abandoned Church to be Revered as the Goddess~

Home >
Novel >
The Demon King’s Daughter is the World’s Strongest but a Shut-In! ~Shut Herself in an Abandoned Church to be Revered as the Goddess~ 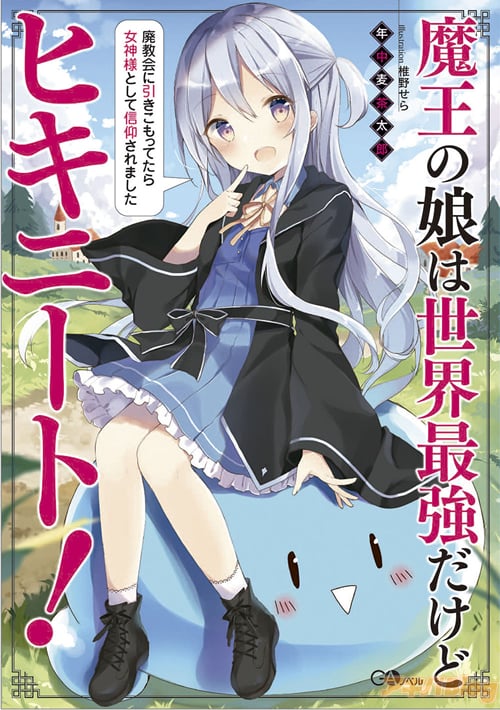 The strongest biological weapon made of the Great Demon King’s genes, Iris.

She was given a mission of eradicating the human race and unleashed on their lands.

They didn’t know that Iris had a disposition of a shut-in.

Ignoring her mission of destroying the humans, she shut herself in an abandoned church in the middle of the wilderness and lived a life of eating and sleeping.

However, the tremendous magical power emitted from Iris transformed the wilderness into fertile lands causing humans to gather in this place.

Like that, humans began to revere her as the Goddess.

Can Iris continue to maintain her NEET lifestyle any longer!?

The Reincarnated Vampire Wants an Afternoon Nap (5)
Kumo Desu ga, Nani ka? (1)
Being Recognized as an Evil God, I Changed My Job to Guardian Deity of the Beastmen Country (1)
Beastly Fēi that Go Against the Heaven: Coerced by the Huáng Shū (1)
Genius Doctor: Black Belly Miss (1)
Stunning Edge (1)

These are recommendation lists which contains The Demon King’s Daughter is the World’s Strongest but a Shut-In! ~Shut Herself in an Abandoned Church to be Revered as the Goddess~. You should give them a visit if you're looking for similar novels to read. Alternatively, you can also create your own list.
More Lists >>>

When I started reading the novel I thought it would be about a cool, strong, introverted MC... I was wrong This novel has a very cutesy setting. Personally, I feel it's very slice of life-ish and hence my disappointment. I was expecting a cool female MC, but instead I got a child who is incredibly op but is terrified of humans and the slightest bit of social interaction.
12 Likes · Like Permalink | Report

Alright since past 10 chapter I will rerewiew and will be edit in future. (Will try to not spoil as much as I can) Demons strongest weapon is a NEET with her cute mascot which she saved. It's a good slice of life with a cute MC which how she interact with others and you can say that the author slightly sexist? The encounter rate with men is high but short chat unlike women a few but interact with them often.... Well all is good with how the mascot retort... more>> to MC but no one understand the mascot. <<less
5 Likes · Like Permalink | Report

Tbh I'm disappointed. Summary mislead me. Thought it would be like a calm mysterious goddess who'll remain shut in. Something like Evil God Average. What we got is a shy cute loli who looks 10. She did go out a lot and didn't seem like she hated it that much. More like she'll be ok with it if she gets over her shyness.. Similar to Reincarnated Vampire in light heartedness except even that vampire character would be more fitting as a goddess than this MC. I don't know who recommended Kumo Desu,... more>> but it's nothing like that nor as cool an MC as that. I'll leave this as a 4 for now in expectation of the kingdom building. <<less
4 Likes · Like Permalink | Report

Although I don't really want to review something before fully finishing it, it's something that I wanted to do right now. So here it goes; Actual rating 4.6/5 Starting out as bit of an oddball it quickly develops into a concise but fulfilling story, centering around the protagonist & her merry band's antics. Holding a Slice of life type of fluffiness to it, it gave me a few chuckles and the dumbest grin while reading I probably looked like a ret*rd hanging his mouth open in a weird way. Story line may seem... more>> bit all over the place but that's something I don't particularly mind. There isn't a long term outline or a goal for the protagonist that guides the direction of the story, leading into a smaller episodic arcs if you will. It's not a long read you'll probably need a 3-4 days to read all of the chapters. But it's by no means short or boring. (For me atleast) <<less
1 Likes · Like Permalink | Report

I understand the attraction of the novel, is just a simple lighthearted novel with a overly beautiful protagonist. If you like honest and dumb lolis as main characters and a storyline with nothing dark, this would be perfect for you. I was kind of hopeful when I read the summary, but do not expect too much from this novel. You will not see any * or hidden secrets, just plain cute girls interacting with each other. This is the basic lighthearted and overpowered another world story you can find anywhere. If... more>> you are not into what I repeated a lot of times, do not read it. I rated this a 3 mainly because I mostly cringed when reading this, but it did not mean it was terrible. Just bland. 1*:What I meant about schemes was maybe a protagonist that planned how to hide their identity. Well it was my wrong choice of words, I apoligize. <<less
1 Likes · Like Permalink | Report

Cute and fun novel for people who's looking for light hearted comedy story. Several action filled chapters here and there but not overly concentrated on. Basically, MC is an artificially created life by the demon king for the purpose of destroying humans. Unfortunately after her first visit to human town, she got intimidated by their number and develop fear for human. Deciding to abandon her mission, she found an old church and decided to live there. Incidentally, her magic power seep into the environment and invigorates them. People start moving into the... more>> location, build village and she was mistaken as guardian goddess... Which she doesn't quite mind as long as she can sleep in peace... NEET style. <<less
1 Likes · Like Permalink | Report
Leave a Review (Guidelines)
You must be logged in to rate and post a review. Register an account to get started.

Heroes of the Past