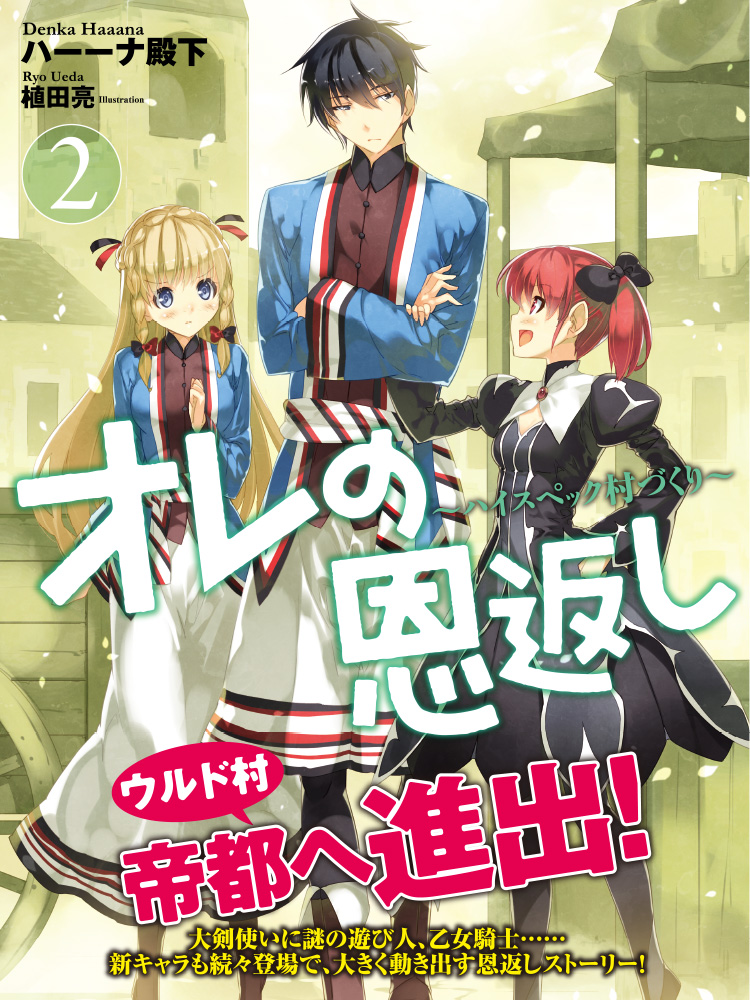 I was a mountain climber in Japan, and when I noticed, the view that spread before me was a strange one.

A villainous Lord and a rural village at the brink of destruction filled with children. But those children have no way to oppose, so I guess I will save this village as thanks for them accepting me.

Release that Witch (2)
Otherworld Nation Founding Chronicles (1)
Seiun wo Kakeru (1)
Why not go to JUSCO with me, Valkyrie? (1)
I Became the Demon Lord and my Territory is an Uninhabited Island (1)

These are recommendation lists which contains Ore no Ongaeshi: High Spec Murazukuri (WN). You should give them a visit if you're looking for similar novels to read. Alternatively, you can also create your own list.
More Lists >>>

Very generic isekai. Completely boring for experienced isekai readers.
There is nothing special in the plot, characters, and world building. Method of writing, flow of conversation, character interaction, everything is so generic and feels like being written by a teenager who reads generic isekai novel and tries to write one themselves but they lack the talent to prepare a unique story. The MC conveniently accept the reality that he's in another world almost immediately as if he's born to do so. Then right away he conveniently meet a generic girl in distress... more>> in which he helped right away. Heck, the author don't even elaborate how a normal human being could defeat several mutant rabbit monsters. The author just wrote it as "MC went ahead and defeated the monsters". This is a very lazy writing or lack of talent in literature. Next, as generic as it can be, as stated in the novel description above, MC stays at the girls village, Villainous noble appears, MC protec the people, etc etc. New isekai readers (and teens) might like this, but experienced (or mature) readers who've been lurking around novelupdates would find this novel very plain, generic, and boring. <<less
27 Likes · Like Permalink | Report

A wonderful novel about a guy called ... more>>
Spoiler

[collapse]
Who goes to a parrallel world and will most likely help the village and develop it. Just as said in comment of ch4 By kirindas (comment section)
Spoiler

the MC doesn't immediately go to relax, but keeps his guard up and analyzes the situation. XD

[collapse]
Is a really good point of the novel. As there are actually threats not so much yet as it's the start and MC is op for now. The realism in the sense that MC is smart and has knowledge about surviving and not our usual story where an adult acts like a child (really annoying). As of now there is a lot to look forward to and as I have read only 5 chapter it's still not decided whether it's excellent and exciting story or just a decent novel. The children in the story are also sweet and likeable. Story 5/5. Pacing - Perfect. Personality[mc] - Kind, Realistic {ch 5} Knowledgable {ch 8} Translation Quality: [Kari Tl'ers]- 99.99% perfect. Recommendations - 6/5 Comment section readers (unrelated to story) [only till ch10, old ones only] Kirindas, Billy Hebert, ohmariowv, nansty, Kari, Yome, Dumdum, Loyal till the end, Tadano Hito (just person), joggernaught26, v-core, beyondgodmaou, Animelover, Eliss, Moist Moose, scipo0419, darklain0725, Aurelius H., Tokanya, Soliel de la Ange, wildthorn, By Kari (The Tler)
Spoiler

The MC isn't an ani-taku[anime otaku] or novel otaku who magically knows sh*t after being transported into another world. He tries to keep calm and make sense of the things that occur to him.I mean, although it happens later, you don't see him even spare a thought about the posibility of magic or something fantasy-like like that.

problem with isekais, the explanation of language barrier, reincarnation and transmigration can explain it but when being summoned or transported it isn't explained well with a few exceptions.

Definitely nothing new but nevertheless it's well executed and highly enjoyeable. There's a good balance of world building, management, modern knowledge know how, and cooking. The MC is a pretty decent bloke but at the same time not a doormat. Recommended if you aren't against the isekai genre as a whole... Because, you know, complaining that isekai are too isekai is pretty counter productive. Thanks for the great translation, Kari!
14 Likes · Like Permalink | Report

Yet another 'middle of the road' isekai. The GOOD. The BAD: The DIFFERENT: Overall, the strong point here is that there is some character development, and apparent intent to maintain a focus on city/world building.
9 Likes · Like Permalink | Report

More of the same The story starts fairly ok with a MC that takes his time to analyze the situation and find a way to survive but after some chapters its clear that is just a way of using over exposition to increase the chapter length rather than having an intelligent character He is strong without a reason which only serves to make people marvel at him and this takes the "stuff I copy from japan makes me a genius in this world" to unheard levels just because of how utterly s*upid... more>> the people of this world are, to the point the MC has to teach them to chew their food... I'm not making this up
Spoiler

The thing that made me drop the story was the rice, the village was deprived of their adults, recruited by the local lord and now only children and the elderly remain, and they are starving

Then of course, here comes the rice to the rescue, the MC finds a patch of wild rice growing next to the village and teaches people to eat it, which they didn't because they believed it was poisonous

The fact that people had a cereal growing next to themselves and still starving is weird because even if they believed to be poisonous they just had to look at animals eating the rice to realize it was actually edible and they are supposed to have hunters so looking at the behavior of animals is a given, for example, when I was in my hometown and herded sheep I noticed that those whooly f*ckers never eat the belladonna, a hallucinogen plant but they were adamant on going out of their way to chew on any edible plant, all of them which could also be eaten by humans, how can you not notice that rice is edible if you have animals?

But it gets worse when we are told about how they harvested it and there was enough rice to feed the whole village for a year...

They were starving next to a f*cking mountain of food, that's how s*upid that people is, the only comparable case I ever saw like that was in Space Odyssey where the ancient cavemen were starving because they had not realized they could kill animals and eat them

So, the people of this isekai are as s*upid as the cavemen from better stories

I rate it 5 star because some people read the novel expecting something more than what the novel intends to deliver and giving it a low rate since it does not suite them which is understandable but due to this, the novel will end up being buried along with other novels in this site due to poor ratings and popularity when in fact its a decent novel intended for readers who like this type of novels. Typical jap isekai novel, food, culture and technology in japan being shared to current other... more>> world inhabitants more on slice of life and a bit of action. The novel is a good read if your currently bored, or into novels with building progressions, the slice of life in the novel is detailed enough where you don't end up being clueless where they got these or how they did it. Some plot holes are being explained into why they are like these or like that. The action on this novel is not bad, rarely happens but well detailed and explained very well. So far in the current chapters we don't have the complete grasp of the potential power and skills of the protagonist. Harem is currently underway since most of the characters with important role in the novel are females. To those into novels FAIR WARNING: the DUDE is your typical dense MC. Translation is perfect I rate it 5/7. Updates on chapters are random. So far this novel is nice and a good read. <<less
4 Likes · Like Permalink | Report

All I can say about this novel is "eh". The premise is not bad and it seems like the story could be interesting. But when it comes down to it, it's just boring. Reading it has become kind of a drag. I've read other novels with slow pacing and the biggest danger to these kinds of novels is losing the interest of the reader. The MC is blander than white rice with more whiter rice. He's got no particular traits or goals to speak of and he does everything based... more>> on general niceness. The reason why he knows everything about everything is explained away by his "adventure parents" who "disappeared" (I guarantee you they will show up later in the story), which is just lazy. The author is obsessed with the Japanese circle jerk. Everything has to be super Japanese and only Japanese. From the paper to the rice everything has to be Japan focused, and the MC claims he's traveled the world... Not a huge deal but it gets irritating when you see it over and over again. Also it doesn't help that the translator is taking criticism way too personally in his comments. You are forced to read it because it's at the start of some of the chapters. And it's really just cringe, seriously even if the novel is boring it's the authors fault, just move on. <<less
3 Likes · Like Permalink | Report

Dropped it coz of various small inconsistencies that piled up and pissed me off. Plenty of repetition too like man I get it, adventure like parents, beautiful small girls; stop repeating it every chance you get. What is this? An essay trying to reach the desired number of word count? It's an average read if you ignore those. Not something I'd recommend unless you have nothing to do with your time.
1 Likes · Like Permalink | Report

As far as I've read I don't like it it's just very generic man gets transported to another world, fight first monster (Either really weak monster or near end game monster in this case it was weaker) finds a town/village etc. Etc. Etc. Meets people etc. Just the normal bland story of an Isekai. I do enjoy the very concept of isekai so I try to read everything in my spare time which right now isn't much so if you feel like this would be a waste of your time just... more>> go ahead and skip it no one's stopping you, unless someone actually is and at that point all I can say is goodluck. But if you have nothing else to do or the other light novels you are reading haven't updated in a while and for some reason you pass by this go ahead and read it, its not AMAZING but it's better than some other novels I've seen out there. <<less
1 Likes · Like Permalink | Report
Leave a Review (Guidelines)
You must be logged in to rate and post a review. Register an account to get started.

The Halfwit Halfling: A Bard's Tale