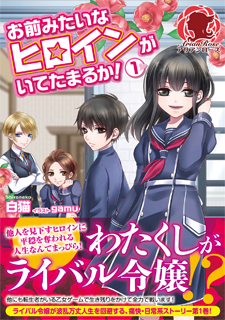 One entry per line
Shironeko
白猫

One entry per line
gamu

Status in Country of Origin. One entry per line
148 Chapters + 7 Extras
4 LN Volumes

Tsubaki, who was once an office lady, was reborn with memories of her previous life carried with her.

At the time she was still four years old, she started to recall that the world she was living in was actually the world of a Shoujo Game after heard what her halfsister, who Tsubaki believes was a reincarnated person like herself, said to her.

— However, the current world she lives in was far different from the world of the Shoujo Game.

This is a story about a girl who believes she can rescue her mother from her impending doom and protecting her cousin, the main capturable characters, from the hand of the Heroine.

By A Slight Mistake (6)
Kenkyo, Kenjitsu o Motto ni Ikite Orimasu (6)
It Seems Like I Got Reincarnated Into The World of a Yandere Otome Game (2)
Escape Galge (1)
National School Prince Is A Girl (1)
The Elf Is a Freeloader (1)

These are recommendation lists which contains Omae Mitai na Hiroin ga Ite Tamaruka!. You should give them a visit if you're looking for similar novels to read. Alternatively, you can also create your own list.
More Lists >>>

Don't be intimidated by the great wall of text in the first chapters, once the family drama is out of the way (albeit temporarily, with a few loose ends to tidy up in the future), Tsubaki's life is quite enjoyable and entertaining. The romance is also slow going, the story having more focus on Tsubaki's school life and friends while she prepares to take countermeasures against the selfproclaimed Heroine.

Unlike the rest of her Villainess Noble Girl cohorts, she isn't necessarily acting against or wholeheartedly into her designated role. She just didn't try to resolve the misunderstanding of her character for her own convenience and use it as a shield to protect her family (particularly her mother and her maternal cousin who is one of the love interests) from the 'Heroine' and said heroine's mother.

For those curious about the male lead, their relationship can be summed up in this dialouge:

"I have a favor to ask"
"Sure"
"Don't just agree so easily, let her finish! Look at her face, she's obviously going to ask for something troublesome!"
"But I trust Tsubaki won't request something that will inconvenience/hurt me in any way"

Read the raws online, may differ from the published version. This review is mostly for personal reminder about the novel. ... more>>
Spoiler

Started out interesting but as the story went on I lost interest. I wanted to know what was going on with all the reincarnated girls but seeing Leon as the main love interest and Kyousuke fall in love with Touko left a bad aftertaste. Maybe the love interests just weren't my type. I mean putting it badly, Leon's over-persistent and it's annoying. It pays off in the end. Some people love this because the lengths the guy goes to to make Tsubaki happy is amazing. I was flipping tables at how much people were trying to get them together at times. *Stares at Kyousuke* Yet it didn't resonate with me. The two main pairs ended up being pretty good matches, if I think about it. Still not the ideal type of relationship I was looking to read about.

Loved the family love everywhere and ugh can I just say Asahina Kaoru, you are a cutie.

Up to ch8 review: It was a great novel, Its not your typical reincarnated-in-otome-game story, this one doesn't focus on avoiding her death flag instead its to avoid her family & relatives from death routes. Its has a tinged of seriousness and slyness. Im still waiting for the ML to appear but Im expecting it will be a great ML. I totally recommend it.
5 Likes · Like Permalink | Report

Uh.. so you see..., I am picking this up and I personally as the translator can say that it has potential. But be mindful that you may need to read the same chapter twice to process the information cause it gets hectic sometimes. (Considering a novel where more people reincarnated it's rare.) So, unless you're dead-set on reading a isekai novel, then try it. I'm rooting for you!! (= u =) / Unfortunately c29 and c30 have dead links so I'll have to replace them.. :') This is a... more>> long forgotten novel, I'm paying my tributes to when it was at the peak of it's popularity! <<less
3 Likes · Like Permalink | Report

I have reading this novel since I like to know about the life of rich people. But at the same time I disastified about the MC who want to protect her cousin. Because even though the MC's reputation got ruined and being regard as a villainess, her cousin kyousuke just led the girls on the school follow him around and the reason being he is weak at woman because remainding him to his mother, but don't he also know how the MC school life being ruined to protect him from... more>> the female students who he ignore. I myself Is simpatised about the MC'S school life being ruined because her cousin who was a captured target in the original otome game. I think I don't like her cousin who using her as a Shield and enjoy his school life as a popular male student that being admired by everyone while the MC strungle because of him <<less
3 Likes · Like Permalink | Report

I have to take a break from this story for a bit while I try to find the brain cells I’ve lost track of. It’s honestly not that bad overall, but there are times where I have a “... what?” moment. It turns out that MC’s personality before she regained her memories seemed much more mature than after she regained her memories. Truth be told, the MC’s personality is chaos in itself. ... more>>
Spoiler

There’s an incongruity between her personality before and after her biological parents get divorced. She shows barely to no sign that she was a lady in her thirties before she reincarnated. She does reflect on of her actions but, at the same time, she doesn’t take a lot of things to heart.

That is to say that it’s not like I believe that all adults have to be mature to be considered adults. But there’s a limit to how much childishness a mentally aged person will allow themselves.

[collapse]
To put it bluntly, I don’t care for this type of MC. I’m fine with a laissez-faire MC; however, this MC seems like she’s determined to live through her second life rather than in it, if that makes any sense. She knows that she’s in a different world, and she understands that she reincarnated, but she doesn’t seem to feel the need to adapt to her surroundings. It’s fine having a modern mindset, but she now lives in a society where a girl’s/woman’s personal decorum reflects her status. Since it’s a romance novel, I know that she’ll find someone who loves her regardless of her personality, but she feels like an outside observer to her own life. It makes her current relationships feel so shallow. If even she cannot be immersed in this new life and world she’s living in, it doesn’t make it a very enjoyable read for me. Also, a problem that I have with most JP web novels is how they deal with time skips during the protag’s childhood. Although long lengths of time passes, there seems to be no reflection of that on their mental age. Their physical character grows but their mental character stagnates. I know it’s fiction but even suspension of disbelief cannot make up for the lack of character growth during a time skip. It’s really hard for me to continue this story. I will come back to it eventually because the concept is interesting. Unfortunately, I honestly cannot enjoy this story with my current mindset, so I’ll stop before I come to hate it completely.
Spoiler

(P.S. The guidelines state that you shouldn’t base your rating off of translation quality, so I’ll put this in spoilers since it has nothing to do with the above topic. I just want to say a few words.

The translation quality has much to be desired. When it comes to simple grammatical errors (like tense shifts and misuse of certain words) or even proper formatting, these small errors make it a little distracting to read. I still thank the translator teams for doing what they’re doing because I can’t understand a lick of Japanese.)

I know that the fact she was reborn severely affect her mentality, most of reborn protagonists are like that. I just don't see that on the supposed heroine, and instead the side of 'villainess' have two of them. I hope that they could show the supposed heroine pov too, so we could see her reasoning, rather than blaming everything and anything to 'because its supposed to be me, I'm the heroine' reasoning on her part because its dull and overused tbh. I'm sure after living there for years, she knew that... more>> this isn't a game and her action could lead to someone demise... <<less
2 Likes · Like Permalink | Report

This is quite great heart-warming series~
Spoiler

There is no bad ending in this series, so you can be assured. Even the "heroine" gets the good ending.

The family time and rom-com are the best part which the reason I read on the ncode (untranslated).

The ending is satisfying~

the translated version has been incredibly boring so far, with the main plot being MC's mother's romance. Maybe it gets more interesting in the raws, but as far as chapter 12 (the most recent TL for me) it's just MC's mother's romance and that's about it. I want MC to have some kind of pertinent conflict but none yet. Other than that the translation is okay and the plot is interesting. I don't have the energy to MTL the raws but by the summary it sounds okay lol.
1 Likes · Like Permalink | Report

A story with an overdone premise that is actually pretty fun to read. Instead of trying to get revenge the MC wholeheartedly wishes to move on and make her mother and her cousin happy. As it is still the beginning of the story not much can be said but the existing content is very satisfying to read. Also a very special thanks to Ellionora Translation for picking this up and doing such amazing work with the translation.
1 Likes · Like Permalink | Report

I have only read to chapter 18 but I think I will be stopping here. The plot has not been well-anticipated for me to continue and I don't think it will be worth my time. Though I liked how there was more than one person who reincarnated it might be enjoyable for some.:>
0 Likes · Like Permalink | Report
Advertisements
Leave a Review (Guidelines)
You must be logged in to rate and post a review. Register an account to get started.