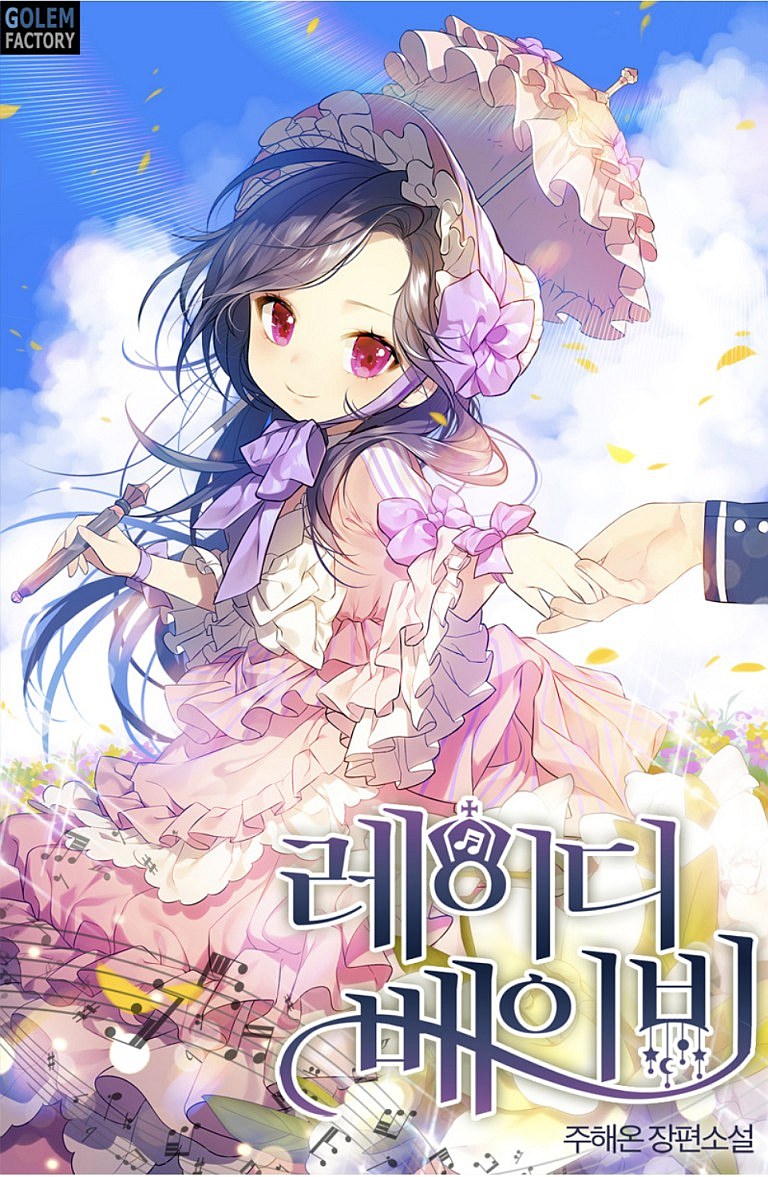 One entry per line
JU Hyeon

Status in Country of Origin. One entry per line
420 chapters (complete)
8 volumes (complete)

One entry per line
Golem Factory

Her family members died, one by one, and then a war erupted across the empire. Calliope never seemed to be able to escape death. But.

Wa….ah?! I’m crying? She had gone back to the time she had been born!

And so, to prevent the tragedy of her past life…she’ll develop fine motor skills!

and change the laws of nature!

*baby flips over for the first time!*

and to improve her communication prowess, she’ll diligently practice!

She was so happy while spending time with her family and wanted to tell them she loved them…but after awhile…why is it that her family members seem to be doting on her way too much…? Calliope spends happy days with a family that squeals “how cute” at the mere sight of her breathing. Slowly, but surely, she’ll change the future.

But as she grows up and nears the time of reckoning…will she be able to prevent her family’s downfall, even at the cost of her body and life?

These are recommendation lists which contains Lady Baby. You should give them a visit if you're looking for similar novels to read. Alternatively, you can also create your own list.
More Lists >>>

4.5/5 I absolutely love this novel (well, it's actually the manhwa version). This story isn't just a rebirth story. We can still meet the "fantasy" elements in her second life, that's one of the good point of this novel. I know for some people it was a bit creepy that our 6 years old MC already so smart, genius, and she even "discussing" politics with her brother's bestfriend. But hello she only talking about this matters to her trusted one. I mean, that tragedy happened without a notice. So this time she have... more>> to prepared at very early time. And about the "Love interest (s) ", this is a noble story where they got engaged and married at a very early age. So I won't complaint. It's cute and pure tho. Even a 5 years old me have said something like "I will be your wife in the future". Rest assured, no, our MC didn't say something like that, she just meets a lot of Male targets. I love this kind of rebirth/reincarnation x nobles romance story!! + thank you to the translator-nim (and teams) for picking up this novel! Please continue! 파이팅!! <<less
11 Likes · Like Permalink | Report

I'm not sure how the novel is.. but here's how the manhwa was portrayed: Basically Lady Baby is a reborn-type novel. Like how all reborn ones started, the MC's previous life was tragic. ... more>>
Spoiler

Her family was a noble but somehow they accidentally got involved in scandal. One by one starting from her father, her two brothers and her mother died. Then while she was grieving a fairy or something decided to help her and she reversed the time to when the MC was baby and from then she decided she would prevent the tragedy from happening. Hence begin her life as a genius baby who can talk, walk, act like a wise Lady

[collapse]
Imo, it's basically like if a korean otome got married to a japanese isekai.. this is their baby, Lady Baby. Their reactions be like: A barely newborn baby can talk: " *gasp* The baby can talk! She's genius!! O.O" Barely turn into a toddler she can courtesy and act like a well-mannered lady: "That's kinda weird... but since she's a genius so yeah" Meanwhile,
Spoiler

the MC: "I. Need. To. Work. Harder! I need to protect my family! I have to stop tragedy!" --> can talk as a new born, can walk before she can even crawl and act like a real lady with thoughts she didn't want to shame her family while her peers were running around acting like their age.

[collapse]
That's how it was in the early chapters of the manhwa at least. I won't give this a rating though since I only read the manhwa and dropped it early. <<less
11 Likes · Like Permalink | Report

5/5 I love this story! Thank you so much for translating! Please please continue to translate!!
3 Likes · Like Permalink | Report

I've come from the webtoon/comic of it AND THIS IS AMAZING! I mean, yeah, there's some weird stuff but it doesn't stop me from liking it. Hopefully you can continue to translate this!
2 Likes · Like Permalink | Report

Well I actually read the manhwa instead but same thing lol. I'd recommend the comic more since there are updates and really really really beautiful art panels! The artist is really talented, I found myself squealing from cuteness haha Anyways, it's a good mystery. Since it's pretty slow paced, I did get a bit annoyed but...I'm still reading it. Slowburn imo is fine, but I really struggle to tolerate it when the MC (s) are children... and at chapter 117, FL is still a kid. Whatever, just wish we could get... more>> through it faster. It does bother me how... obsessed her family is with her? Like, yeah, it makes sense she's mary sue bc she lived her past life and time is rewound to her as a baby, and she's determined to find out who killed her and her family yadayadayada. However, in her past life, they were a quite normal family who loved their daughters and sons and each other generally the same. But suddenly, MC is just SHOWERED with love from EVERYONE around her. What, all because she's smarter as a child this time around? I guess it makes sense she would get more attention for being a genius 5 year old, but god the author really makes the whole world revolve around her, like literally EVERYBODY just is irrationally loyal and obsessed with her. And it's obvious that this is gonna carry on well into her adulthood, which just doesnt make sense because a majority of this love is based off how incredibly cute she is, and its not like her looks are any better than the way she used to look. As for the romance... pretty sparse at this point. The ML is pretty obvious, but there were a few times where I had some small doubts... it's pretty clear tho. But its also weird how we know almost nothing about him? Like, the mystery is kind of over the top, but they really shrouded this dude with veils and veils of mystery, which just makes him seem like a lazily written, flat, boring, cookie cutter character. Not even a cookie cutter ML, a straight up boring *character* since I can't even tell if he fits any cliches since we literally know nothing about him lol. In conclusion, it's a good cliche story with some decent mystery oOOoOoOoOOh. But given some irritating plot holes and the unnecessary dragged out storyline, I'd really prefer to rate it a 2.7, but since I just liked the art so much, and admittedly Mary Sue characters are a guilty pleasure of mine... 3.5 rating. <<less
1 Likes · Like Permalink | Report

Lady Baby is good as of now, I can see the potential and it's fun seeing a small child act like an adult. I looked forward to the story at the beginning but the story is kinda falling flat right now. The MC is on the edge of being deemed 'mary sue', she does everything perfectly and adored by everyone, those who don't adore her are 'evil'. Her being beautiful is also emphasised on every occasion, I'm fine with a beautiful MC but when she became a literal idol in... more>> the town I scoffed. The bond she has with the main love interest is also lacking, they just like each other because they like each other. But so far the story has been good and I'm curious about the mystery, I hope it gets better in these areas and the MC gets some character development. <<less
1 Likes · Like Permalink | Report

There is one thing that no one mentioned that really bugs me.
I think it wasn't explained very clearly, but Reas' grandmother should be the mother of his uncle, the current emperor. After all, his uncle and father were brothers and the grandmother looks just like Reas and his uncle.
Why then, was she so utterly useless?
Even if she would have no position as a dowager empress, she at least has the authority of an elder, being the mother of the current emperor. There are so many times throughout the book, where Reas had to back down, was belittled etc, even when he was trying to get the throne after the emperor disappeared and the ministers opposed it. She didn't help once, either politically or to intervene as a family member between them.
Let me clarify it, from the beginning to the end of the book, she didn't do anything, not even once. What was the point of her character then?
Lippe even said she still has a huge influence, she's very strict and respected. She just had some unnecessary interactions with Lippe about 3 times, with no important outcomes between their meetings.


It's also kinda annoying that Lippe was the youngers child in her family, she married, had a child a few years later. And by that time... her brothers, not only didn't marry, but didn't even have a prospective love/marriage interest. The whole world becoming Lippe's fanclub at the ending was also so narcisist of the author, like the whole world became a Lalaland circling just for Lippe, everyone existed just for her and didn't have any other interest.