Novel Updates
RegisterLogin
Theme
Search
Your changes has been saved.
Advertisements
I Sacrificed My Life, But He Was A Tyrant

Home >
Novel >
I Sacrificed My Life, But He Was A Tyrant 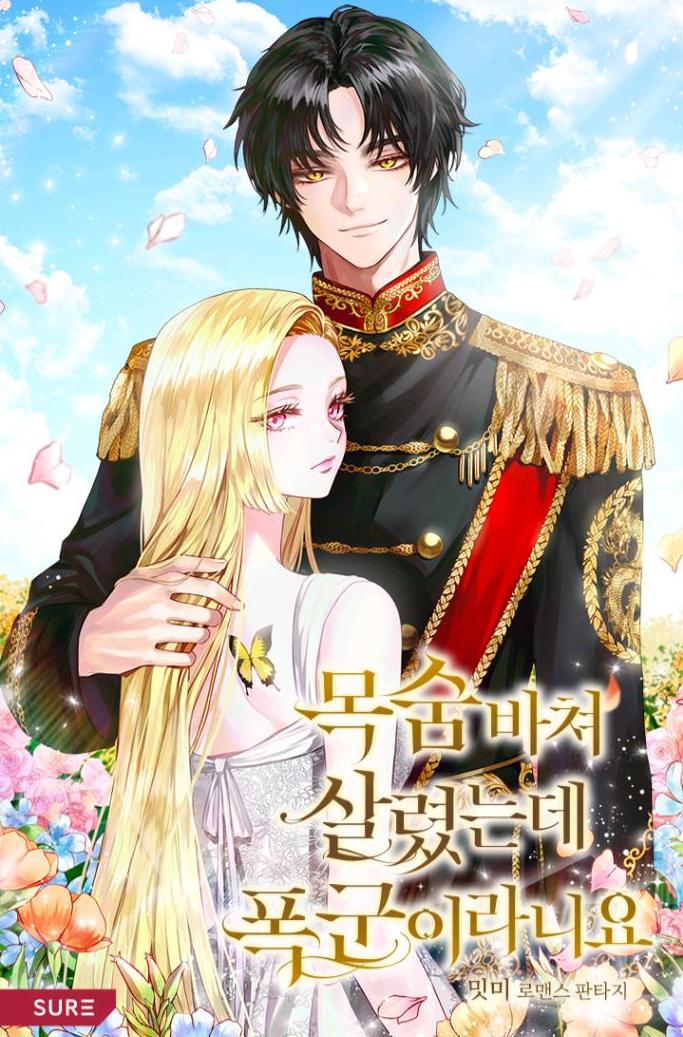 One entry per line
밋미

Status in Country of Origin. One entry per line
131 chapters (completed)

One entry per line
Kakaopage
Sure

In order to prevent the fall of the empire, I died protecting my childhood friend, the third prince.

But when I woke up, I found myself occupying the body of a frail noble lady, and to make matters worse, the imperial palace’s edict to welcome her as the crown princess came down.

The Crown Prince was the third prince, and my friend ‘Signus’, whom I sacrificed my life for.

When I met Signus again, he was no different than a crazy tyrant.

At this rate, the empire was likely to be destroyed soon.

Damn it, I died for no reason. I’m going to live in a wrecked empire anyway!

“That expression, that gaze….”

Signus touched my face with trembling hands and gave me a tearful smile.

“Get a hold of yourself. I’m sure it’s fake again this time. There’s no way I can find you so easily.”

Are you… looking for me?

I Corrupted The Good Male Protagonist (1)
I Met the Male Lead in Prison (1)
Sickly? Husband’s Contractual Wife (1)
The Emperor’s Terminally-ill Youngest Daughter is Being Taken Care Of (1)
The Reserved Daughter Of a Duke And The Cold-Headed Emperor – The Child I Picked Up In My Past Life Had Become an Emperor (1)
When I Faked Amnesia to Break off My Engagement, My Fiancé Casually Told Me a Ridiculous Lie—“You Were in Love With Me Before You Lost Your Memory.” (1)

These are recommendation lists which contains I Sacrificed My Life, But He Was A Tyrant. You should give them a visit if you're looking for similar novels to read. Alternatively, you can also create your own list.
More Lists >>>

Since it's new, I haven't got many details. From what I know she is the knight who solely to protect the third prince, who is her best friend. But she got killed on the day he became Crown Prince. ... more>>
Spoiler

I want to know when they meet again

She has transmigrated to another body. Who a daughter of Marques I think in Holy Empire of Avita, which had been frail noble lady maybe due to poisoned. Even when she even start to speak, the servant became crying bcos it's been long time since she spoke.

She woke up after one year of her death, and Signus has become tyrant which she was so suprised to hear that

She became ML knight bcause she got premonition dream about the first and second prince who if they became the CP they will be served as the devils puppet and will destroyed their country. But she felt dissapointed met him again after her reincarnation, he became tyrant.

I don't know why the score is so low here. In my opinion, it's one of the better novels. The writing is great, and so is the translation. The MC is a strong character - not physically. she seems quite smart. I like how it's written - there's so many intriguing parts of the story. Why is the ML behaving the way he is? It leaves me wanting to read more. I don't think it's a typical romance. I like the MC quite a lot. EDIT:.... oh no why did I... more>> give this a 1 star?? I think it was my fat fingers T_T (I can't change my rating) <<less
2 Likes · Like Permalink | Report

This is fine ln, if your looking for a swich form the typical rebirth MC, cause' the ML (not a spoiler) is the one who made it posible 4 her to be alivr. The MC pov of him is very halarious and allsow its fun to see the small miss communications So yeah recommended
1 Likes · Like Permalink | Report
Advertisements
Leave a Review (Guidelines)
You must be logged in to rate and post a review. Register an account to get started.