Novel Updates
RegisterLogin
Theme
Search
Your changes has been saved.
I am an Alpha 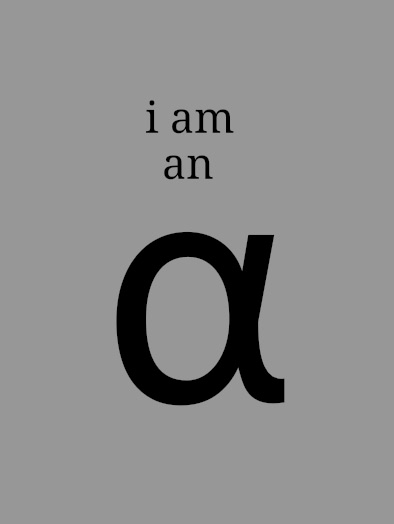 Status in Country of Origin. One entry per line
7 chapters (Completed)

Also named “I am a vegetable”

“Big Brother has more presence than me”

Nothing is more honorable than being an Alpha. Strong, intelligent and handsome. Unlike Betas that are one of many, or Omegas that are delicate and vulnerable.

Even more honorably, I am an Alpha – An alpha who had been vegetative for twelve years.

One entry per line
Wo Shi Yi Ge Alpha
我是一个Alpha

These are recommendation lists which contains I am an Alpha. You should give them a visit if you're looking for similar novels to read. Alternatively, you can also create your own list.
More Lists >>>

Write a Review
18 Reviews sorted by

It was a short 10 minute read, nothing too deep or poignant. I had high expectations since I saw a whole bunch of 5-star ratings but it didn't give me any feels. As in, I don't feel a connection to any character. I don't know if it's the way it was written but the delivery of the story got me too confused a few times for me to properly enjoy it.
0 Likes · Like Permalink | Report

This is one of those novels that you have to read a second time to truly feel the magic and awe. Even though this novel is so short (just 7 chapters), the feelings are very deep and it does have a proper and wholesome conclusion. The title "I am an Alpha" is actually a small phrase that part of a more meaningful sentence that is told in the novel. Throughout the novel, the MC reiterates this phrase and it's not until the very end that he says the rest and fully... more>> reveals what is truly in his heart. The author uses the ABO dynamic in such a unique way (although you won't realize this until the very end!). There's no stockholm syndrome sh*t or estrus cycles or controlling pheromones happening. Out of all the ABO novels I've read, this is the only one where the romantic feelings are very sincere and genuine. I feel like with most ABO novels, the occuring "romance" is the result of being dominated by their biological instincts and not their actual emotions. <<less
0 Likes · Like Permalink | Report

Here's a warning: you will read this story at least once. When I finished the first time I immediately reread the whole thing and everything clicked like pieces in a puzzle which made it all the more poignant and bittersweet. The pace is fast for my usual novel-length taste but the author perfectly executed this story with the intention of focusing on our alpha MC. For those who wants a story explanation: ... more>>
Spoiler

At the end we find out that our alpha MC (soul) has been living in the body of the ML's omega wife in the past 12 years, while his real body was in a coma. MC and omega wife swapped souls when both of them were part of the same accident 12 years past. MC (in wife's body) was conscious of the fact and took care of his original body in the hospital SVIP ward.
MC got his memories back 15 days after he "woke up" (really soul swap again) and was devastated why he returned to his original body when he had everything: wealth, children and the man of his dreams. ML, unable to move on (the plug was going to be pulled on his wife), explains he dearly loves his "wife" because they went through thick and thin regardless of gender which hits the sore spot of our MC because when they were younger (before the coma) IIRC he confessed his love to ML which was met with rejection because alpha/alpha. All this time he was afraid of telling the truth to his family because of fear and rejection (of his alpha body).

ML finally realized after some inevitable slip ups that his wife is still with him all this time and they reconcile.

Let me just say: Read to the last chapter before you settle on your opinion of this story. I promise, it's worth it. When I began reading this story, I thought, both the writing and translation is good. But content-wise, I don't know if I'm going to enjoy this.... By the middle of the story, I decided, after I get to the last chapter, I'll leave a 5 star rating and never touch this story again. The writing is worth that rating, but the story itself is probably just not my... more>> cup of tea. By the end, I was just- Ok. It hasn't been 10 minutes yet but I'm going back on my declaration and I'm absolutely rereading it right this second. So yeah. Like me, you might find yourself changing your opinion on the story after the last chapter. <<less
5 Likes · Like Permalink | Report

That was a beautiful story. I teared up. Usually when it comes to good short stories I tend to want more but this one the length was just perfect. I don't think we needed more.
4 Likes · Like Permalink | Report

Well, wow this is so bittersweet. The translator's song recommendation: "Dave Thomas - I can't make you love me, " is just perfect for the mood. Though, I promise it's a HE! It got a nice little twist, and the reference to the original "The little mermaid" was brilliant. I always cried for the mermaid as a child, and never understood why HC Andersson had to be so masochistic with his stories! Maybe, he wanted aspects of it to be based on his life? Either way, it fit, and ties... more>> perfectly to this short-story! I don't know about the ratings, but I enjoyed the short story immensely. <<less
2 Likes · Like Permalink | Report

It was short but fulfilling nonetheless. I actually cried.
2 Likes · Like Permalink | Report

Meh, I had my suspicions but kept thinking like the opposite of the clues lol, this was very emotion-gripping. I had to read it over again to catch all the clues I had kind of put aside. Very great read, it was too short tho, but that’s what we all say about great stories.
1 Likes · Like Permalink | Report

Beautiful short story, very impactful for its length. No info-dumps, the mystery is for you to discover. The ending is well foreshadowed throughout, worth rereading.
1 Likes · Like Permalink | Report

This is a good short story. My rating is 4.5, rounded it off to 5. I thought that it's too short but it's enough to explain everything. All my questions are answered at the last chapter!
Spoiler

everything is good for the MC but Im bothered since he lived off as an omega for 12yrs and endured everything for ML. Good thing this is a short story or else, I'll both curse the ML and MC

I have mixed feelings. It's a good short read but I am left wondering if their new relationship will work out or not. After all, alphaxalpha pair is unusual in the ABO world.
1 Likes · Like Permalink | Report

One of the best novel that I have read. I was kinda confused and not satisfied at first because it keeps telling about life events, like it's too simple until I got to the point of the story that I suddenly feel like crying because its too heart-wrenching, I already viewed/guessed that the story will have that kind of twist but I never expect that it will bring me to tears. Like seriously. Highly recommended. Guys read it.😊
1 Likes · Like Permalink | Report

Very cute, short and i’m not sure I understood everything, but it is wonderfully refreshing
1 Likes · Like Permalink | Report

Agree, I liked it a lot. And yes it would have been cool to have more chapters. Left me with a tinge of sorrow and love. Well done.
1 Likes · Like Permalink | Report

Not bad, but the ending was pretty obvious. The only reason I finished this story is because it was short. Not gonna read this again.
1 Likes · Like Permalink | Report

Argh love the angst and the happy end. Almost wish that this was a longer one. The details are hinted throughout the book and it really comes full circle. This is one of the more unique plots in the abo genre.
1 Likes · Like Permalink | Report

To be honest this story is a bit confusing... The MC woke up after 12 yrs of coma, unlike other patient who'll be groggy after long sleep his mind is clear and able to make a conversation with the nurse who assigned to him. The time when he regain his consciousness is also the time of the death of the president's wife of their company where he has a position of director. A truly coincidence... (read the story to see more hahahaha) i love the plot. I just need to read it... more>> twice for me to really enjoy it. my rate in the story: 4.5 star because of the confusion and also I really want to read more. I wish it have serialized version at lease 50 chapters? hahaha <<less
1 Likes · Like Permalink | Report

Cute short read. The tags and chapter titles are spoilers so y'know what's happening right away. If you're bored and have 15 mins to spare then read this.
0 Likes · Like Permalink | Report
Leave a Review (Guidelines)
You must be logged in to rate and post a review. Register an account to get started.