Novel Updates
RegisterLogin
Theme
Search
Your changes has been saved.
Advertisements
Ever Since I Take Home An Adonis Who Has Lost His Business 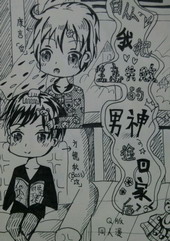 Status in Country of Origin. One entry per line
40 Chapters + 10 Special Chapters

One entry per line
blwenku

I picked up an Adonis whom I had a crush on for three years after he lost his business.

I cooked for him, acted silly to make him smile, and ran all over the places to help him make business connections.

On the day he makes his comeback, I intend to go to the temple to become a monk.

These are recommendation lists which contains Ever Since I Take Home An Adonis Who Has Lost His Business. You should give them a visit if you're looking for similar novels to read. Alternatively, you can also create your own list.
More Lists >>>

Previously, I rated this story a 4. But now I've come back to give this one of my very very rare "5." Why? Because after all this time and after reading tons and tons of other stories... and having forgotten much of the stories I've read already, somehow this one... Still shines clearly in my memory. Sometimes, short stories can be more amazing than long ones because they can capture your imagination with a few sentences and encourage you to reread again and again for more insights. Anyway, I recommend this quite a bit.
30 Likes · Like Permalink | Report

This is a super cute short story, I read the mtl for only 10 minutes becauss the chapters are just like an analogue so it's a fast read. It would be good if someone would translate this becauss it's a sweet fluffy cake among dangerous ones Please read this becauss it is really worth ir
18 Likes · Like Permalink | Report

This isn't your average nonsensical fluff but a very quiet, heartfelt portrayal of unconditional love. I'm reluctant to call this a novel, it doesn't follow the usual rhythm and rules but uses an old classic style for literary short-stories, with very little dialogue, and whenever we do get some, it can seem unimportant, even random, just like real people tend to speak with those we are close with, or want to be. You can feel their desire to be familiar and open with each other but rarely succeeding because, at the end... more>> of the day, they are still strangers. Sometimes the line gets blurry, or is overstepped in a clumsy way, before getting back to its initial position; watching their gradual and natural convergence was a delight, often reminding the reader that such a bond is a fragile string that can rip any second. If you expect flashed-out drama or major character development, then you will be disappointed, it doesn't create big waves, just tiny ripples – it's fairly realistic. If what you are looking for is a silent homage to love, how people grow on each other, what it means to give your everything to someone, enjoy the small daily interactions of two very different men, and feel content with works that don't follow the typical patterns of BL story-telling, then you will love it. <<less
13 Likes · Like Permalink | Report

A breath of fresh air. The MC is so cute and lovable the ML is just helpless against his antics. Its short but the flow of the story is smooth and every chapter is just satisfying enough. Anyway dont let ratings get in the way of trying this novel. Its a very nice read.
7 Likes · Like Permalink | Report

CP: Employe x Boss This story is lighthearted, without any serious drama. Story starts after ML/the BOSS loses his position to his girlfriend because of her scheme. And MC decided to follow and support ML (ML moved in with MC). MC is very playful. His relationship with his family is complicated. He has a 'trauma' from his past (= mother's rejection) and MC hates his father for abandoning him (and his mom). ML is a serious, straight faced man with the ambition to regain his company, who finds himself helpless against MC's antics.
6 Likes · Like Permalink | Report

Yeah so my internal monologue while reading this is split into "Awwwwwwwww" and "hgHKKKK" (which is basically the sound of my heart getting stabbed). There is no in between. It's fluffy and cute. Characters are adorable and the ending is very complete and heartwarming. I finished reading feeling happy and refreshed. That's worth a five stars from me.
5 Likes · Like Permalink | Report

First of all, let me calm down first and fan away my tears of joy. The story was just so pure and fluffy, yes I admit that the plot was kinda plain and confusing sometimes, but the sincere feelings that they both shared was just so cute and lovely. The fact that Kang Yan grew up hating something that he ended up becoming and accepting, it just makes me so proud for some reason.... more>> The story was simple and warm. Just like a rainbow accompanied by a gentle spring breeze, this story will be forever engraved in my heart even after I will come across many other stories. This novel has left the mark inside my heart. And I'm glad it did. <<less
5 Likes · Like Permalink | Report

This is a very sweet and heartwarming story! Our MC has been in love with the ML for four years while working under him as an employee. After the ML was betrayed by his girlfriend and kicked from the position as CEO, the ML becomes homeless. (Don't question why an ex-CEO can possibly become homeless considering all the cash he racks in annually lol) Seeing the now homeless ML, the MC decides to start up his plan of casually keeping and raising the ML as a big pet~ From initial interest... more>> to heartwarming interactions, the ending is naturally a happy one as the ML restores his former glory and the MC finally gets a lover~ I recommend this short story for a fluffy read! <<less
5 Likes · Like Permalink | Report

I have tentatively rated stories 5 stars on here just because a 4 was too low. If there was decimal system here for rating I would take it. I’ve only met two stories that were absolutely perfect to me in every way. Stories that made me feel so satisfied in my heart that I knew the feelings when I read such a story would stick with me for years. This is one of them. Please read it. It’s absolutely perfect. I have no other words. It’s an incorporation of reality and... more>> love and it’s just too sweet to exist. It hits you right in the feels and I cried joyful yet bittersweet tears. In short, please read this novel. You won’t regret it. <<less
4 Likes · Like Permalink | Report

Just like all the other reviews say, this is short and sweet. The only thing I would add is that I'm impressed with how for such a short story, it actually does a great job getting me invested in the MC and ML. The author here does a good deal in a short number of chapters in both humor and angst. I wish all CN novels could have such good pacing (instead of the tendency to drag on for 1000+ chapters). TLDR definitely recommend this as a fun read. It delivers... more>> a lot for its short length. <<less
3 Likes · Like Permalink | Report

This is a short yet emotional story. There is a lot to unpack as the adorable and silly little MC relays his inner thoughts. Due to a misunderstanding, there is some heart wrenching sadness in the middle, but it's resolved in the end. ... more>>
Spoiler

MC believed that it was fundamentally wrong for him to love men as his mother ingrained these thoughts in his mind after his father left their family for another man. In order to prevent ML from being tainted by him, MC keeps his feelings in his heart and resolves to run away after helping ML retake his company.

On the other hand, ML is aware of MC's family circumstances and believes that MC might hate homosexuality. Thus, he offers to keep MC by his side as a 'brother, ' which this ends up hurting MC.

[collapse]
The extra shows ML's side of the story and it's so cute. <<less
3 Likes · Like Permalink | Report

I really love this short story. I feel happy and sad at the same time. This story is so fluffy. So sweet and cute. I just wish there’s more ?
3 Likes · Like Permalink | Report

one of my favorites for sure! The translator wrote once that there is not much of a plot. I disagree. Sometimes it’s not about the action but about the character development and depth. It had a slight melancholic feeling, yet with a sly humor. thank you for translating a great story!
3 Likes · Like Permalink | Report

Too fluffy that it'll burst your kokoro. 4.7~♥♥♥ A short light romance novel that takes the POV of a Secretary/Assistant towards his beauty of a Boss. The novel is already completely translated by Chrysanthemum Garden~ so spare some minutes to enjoy this one!!!
3 Likes · Like Permalink | Report

I was misleaded into thinking..... Damn Misunderstanding!!!

[collapse]
Just a story about MC who would gives without expecting anything in return. But still get his heart ached until thing fully cleared in the end. MC is Precious. He's Funny, he's Cute.... He's a lot of things... And I fcking Love him..!!!! 😭😭😭 ML... He dotes back, but...
Spoiler

He Fcking Misunderstood one thing!!! Hooow???

Short but sweet and I loved it. The MC and ML are very cute together and I loved the fact that the extra was written in the ML's POV while the main story was in the MC's POV. I would have loved to read more about the different characters and if the story was expounded but the length was good enough as it is. I loved it, anyway.
2 Likes · Like Permalink | Report

Fluffy, heartwarming and cute. No unnecessary drama or filler. I like how the author shows how the ML falls in love with the MC’s acts. 5/5 would recommend!
2 Likes · Like Permalink | Report

At first I thought this was a story about a saint MC but I was wrong. The story is very cute with the MC and his boss cohabitating, and there was also a twist to the story that I didn't expect and the development of their relationship was very smooth.
2 Likes · Like Permalink | Report

Short but cute. Mostly, it's mc's POV. It would have been better if the story has depth, chara interactions etc. It's okay anyway since I think the author really meant to write it this way rather a messy and full of headaches story. The extra ch was for ML's POV Also, it's short, so it's not boring although it's mainly mc's POV.
2 Likes · Like Permalink | Report

I'm lost for words except... I CAN DIE NOW AFTER READING THIS! ❤️❤️❤️ -RIP Cause of death-super sweet died in tooth ache and happiness. Haha Kidding dont kill me yet. The world novel is waiting for me to read them. Right amount of drama. I didnt make me cry but my chest hurt from sadness. Then right amount fluppiness and unexpected story twist which totally make the story super happy ending. Love it. I wanted a bf like that too. Where can I buy it? Haha
2 Likes · Like Permalink | Report
1 2 3 4 Next »
Advertisements
Leave a Review (Guidelines)
You must be logged in to rate and post a review. Register an account to get started.

A Rose made of Fire
Advertisements