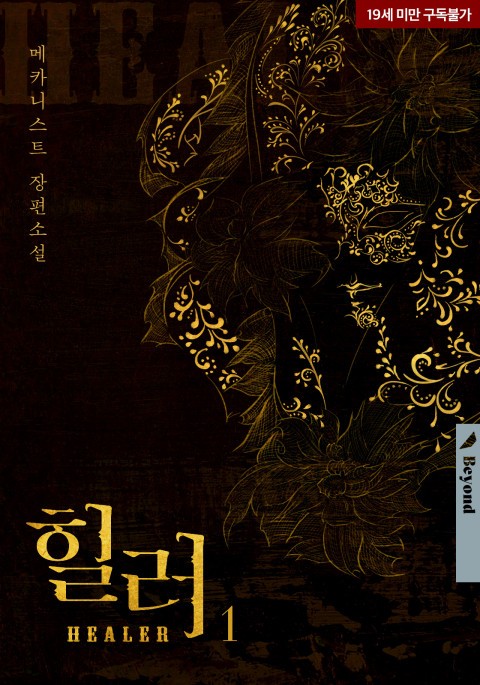 One entry per line
메카니스트

One entry per line
Delta

Status in Country of Origin. One entry per line
Completed (5 volumes + 1 extra)

Healers, beings who create miracles with a voice that heals one. Their singing shows heaven, and their screams show hell.

Yaba (Sejin) and Cocaine (Chaewoo) were kidnapped as children and are forcibly castrated and become singers of the club ‘Paradiso’. There are other singers in ‘Paradiso’, but among them, Cocaine is the only real healer that can heal people with his songs.

Although Yaba hates Cocaine, he gets used to life as a Cocaine’s colleague. Meanwhile, he could not be indifferent to Cha Yiseok, the second son of the president of a large corporation, who is looking for Cocaine’s songs. He looks like he has everything yet has destitute eyes, so Yaba can’t take his eyes off him.

Perhaps he could perceive Yaba’s heart, one day Cha Yiseok proposes to Yaba to sing a song to his brother, who is battling cancer, while pretending to be a healer…

One entry per line
힐러

When the Witch is Imprinted (1)

These are recommendation lists which contains Healer. You should give them a visit if you're looking for similar novels to read. Alternatively, you can also create your own list.
More Lists >>>

Hello~ This is the translator. This book is very well-known among korean bls and highly rated so I thought I should share ;) To preface, the story is more on the dark/mature side so please keep this in mind before you start reading. However, the relationship between the two leads is not abusive imo (more on that later). The premise basically centers around MC who was human trafficked as a teenager and forced into labour at this sorta underground debaucherous club. MC suffers from several mental illnesses and this is integrated... more>> in the narrative throughout the whole story (hint: unreliable narrator in the tags!). In my opinion, this attribute is very unique and might be the most interesting part of this book, I don't often see this sort of depictions in romance novels. However, MC is not the typical weak and naive protagonist, who lets others step over him, in spite of his conditions. Rather, he's cold, tough and talks back to everyone around him. Meanwhile, the ML is a rich dude who often visits the club and although he's not as mentally insane as MC, he's also pretty much an eccentric person. Personally, I think the MC and ML have great chemistry and their relationship is pretty balanced (hence, not abusive). MC is not really the submissive type and he's blunt and snappy with ML although deep down he does care for him, while ML accepts and entertains all of MC's eccentric traits and habits. Of course, their relationship is not sunshine and rainbows so if you're looking for fluff, this is not it. I think they're both equally crazy (and crazy for each other? Lmao) Aside from the romance of course, the story is plot-focused and dramatic. I'm obliged to put a disclaimer; there may be quite a few weird scenes owing to the author's style, who by the way, is really talented in writing (but my tl cannot do it justice ;-;). The book is written like a movie.

tl;dr - The plot and style is very unique and somewhat riveting, it's not really for everyone but worth checking out. Personally, I wouldn't say I love it, but it's definitely a memorable read with strangely charming characters. //P.S there's a nicer cover that you can check out on the tl site, it just can't be uploaded here for very dumb reasons =.= <<less

I don’t know what to say because I’m conflicted. The writing of the author is extraordinary and very detailed so I have no qualms about that. The MC yaba is a complicated character; he was kidnapped alongside his friend (or rather frenemy) and treats his friend, cocaine, like shit. You can’t help but root for him though because he is a very traumatized individual, is very mentally ill and just needs help. He was handed a bad hand in life and because of that his life is miserable. I have... more>> sort of an emotional attachment to him so I will definitely continue reading, but... the ML is tr*sh...
Spoiler

his first introduction is just him being at the club (which is already a bad impression since the club is a drug and or*y fest) and he is shown to be like all of the other customers by being enamored by cocaine (mc’s friend). Later, he doesn’t make himself look better by coming off as a rich, entitled playboy. His family wants him to bring cocaine to his brother because his brother is dying of cancer and cocaine can cure that, but he wants to let his brother die instead because of some inferior complex or familial trauma so he brings yaba to piss off his family. Yaba basically tells his family to f*ck off and gets a flower pot thrown at his head (which causes him to be very injured). I’m wondering, how is this guy going to get redeemed, because this entire time we’ve only seen him do drugs, f*ck randos, be entitled, use yaba as a fake stand in for cocaine, and worst of all, he’s a filthy rich son of a conglomerate so he will always get off Scott free while yaba is (hypothetically) going to stay imprisoned in this shady club for the rest of his life never getting the help he needs. I’m sure he’ll get better, but I can’t help but feel like the tone is pushing the reader to think ML is some cool, handsome, mysterious guy but he really just comes off as a dickhead, which makes it worse, since yaba is so obsessed over him.

It was a story of perfect mutual salvation. Locks who finally found their key. Although they couldn't put the words "I love you" on their lips, the way they express is as much as the water in the sea, deep, vigorous and moving. It was beautiful, and beautifully written, amazing author. *Beware* Chae Yiseok will bring your standards up for a partner.
2 Likes · Like Permalink | Report

An incredible and gripping read. The atmosphere is dark. The sexual tension between the two is at its peak. The psychological background is accurate and realistic. The characters are neither black nor white, but gray.
1 Likes · Like Permalink | Report
Leave a Review (Guidelines)
You must be logged in to rate and post a review. Register an account to get started.