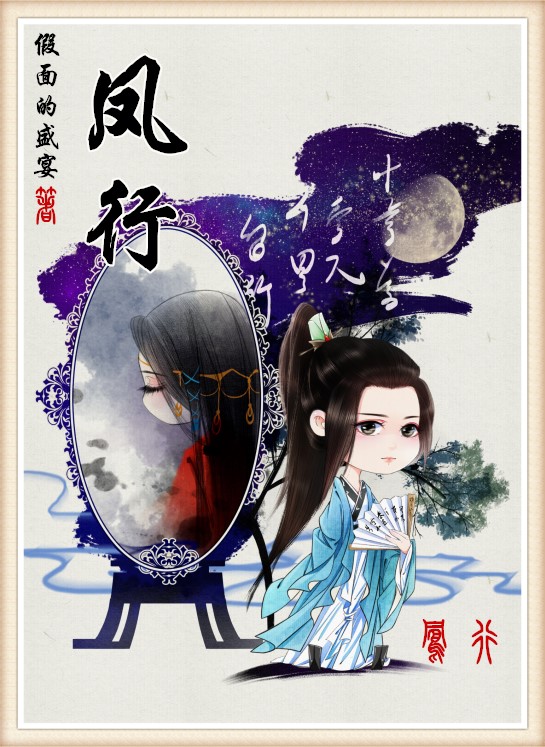 Status in Country of Origin. One entry per line
Completed (159 Chapters)

“When everyone scorned at me because I was merely a woman, I kept convincing myself: ‘Actually, you can give it a try.’” – Fang Feng Sheng

There’s a famous saying in officialdom: there’s nothing to lose. She was the only descendant of the Fang family, the most prominent family of private advisors in Shaoxing. A battle broke the Fang family apart. Her father was implicated and put to death, and she paved her way through thorns to prove her name. But walking down this path, she discovered that there were things beyond her imagination.

Zong Yue knows that he could marry Fang Feng Sheng because he had blocked all her paths of retreat. But it doesn’t matter—one day, the person will become his, and so will her heart.

Note: The title means ‘Phoenix Walk / Walk of the Phoenix’. Since ‘Feng’ is a character in our MC’s name, we decided to go with the pinyin, ‘Feng Xing’.

One entry per line
Phoenix Walk
Walk of the Phoenix
凤行

These are recommendation lists which contains Feng Xing. You should give them a visit if you're looking for similar novels to read. Alternatively, you can also create your own list.
More Lists >>>

As one of the translators of this story, and as a huge fan of the author, my review may seem a bit biased. This story is heavy on world-building and court struggles. As written in the synopsis, FL's father was implicated in a certain embezzlement case and consequently 'committed suicide' in prison. The first half of the plot revolves heavily around this, as FL believes that things were not as simple as they seemed, and that so many hands were moving in the dark. After her father's death, she becomes hell-bent... more>> on overturning his case and clearing his name to the point of obsession. Apart from your usual game of thrones, this story delves deep into the consequences of the minute and seemingly harmless machinations happening outside the capital. This story is a perfect depiction of the Chinese saying: 'an ant may well destroy an entire dam'. It may sound a bit bland, but the well-balanced plot, as well as the three-dimensional side characters, make it very interesting and worthwhile, and it's also well-paced with very satisfying end results. The novel is a bit short but is neither rushed nor contrived, and the length is just right. There is no dog blood drama, but there's plenty of scheming against men of power instead of women in the inner courtyard (for a change). Now, the setting is in ancient China, in an imperialist era with strict hierarchy that adheres to Confucian ethics and patriarchal principles. Women were of little value, and considering this, since the FL was determined to reverse her father's case, with her meager status, she had to take extra measures, hence the cross-dressing. FL is very clever and independent, and also very self-aware. She's relatively a bit 'mature' for a young ancient woman compared to similar FLs of this genre, as she's around 18-20 years old at the beginning of the story. Having been schooled by her father in the ways of a scholar & official since young, she's also a lot more open-minded. Now, on to the ML. He's an imperial prince, and this noble birth comes with an arrogance that's etched deep in his bones. He's used to people vying for his favor, and used to commanding subordinates. He only has to bow to one person, and that person is his father. He's taciturn and domineering, and this is evident very early on during his first interactions with the FL... even as the story progresses, he doesn't magically soften because of his tender feelings for her, which I find a bit more realistic.
Spoiler

Around halfway through, the FL got in deep trouble (which was within her calculations). Her life and death was decided by the emperor, and ML used this as an opportunity to request his father for marriage with her, thus saving her life. Hence, technically, she was forced into the marriage... but it could also be considered a life-saving grace. If thinking from a modern mindset... it's truly too morally ambiguous.

This was actually a result the ML expected and just blatantly took advantage of. To say he's shameless and scheming... well, he did save her life. And the tough situation FL was embroiled in was actually calculated by her own self. She was very aware that her schemes could lead to her death.

[collapse]
The author is known for writing consistent characters. (Moreover, she's really good at writing characters from the ancient era.) That being said, both leads don't suddenly become romantic once they get together. There's an initial awkwardness, and their relationship is more steady and mature rather than passionate. There isn't much doting, and there is barely any fluff. Despite this, I still very much enjoy their dynamic. They respect and trust each other wholeheartedly. And the one common trait they have is that they're both very patient and enduring, and I guess this is one of the reasons why they understand each other well. The author really fleshes out her characters, and she also treats them with the kindness they're due. The antagonists are also smart, and the more you read about them, the more you understand their motivations. You can't just classify them as black or white. Some of my favorite elements about this story (contain MAJOR spoilers) :
Spoiler

1. FL was neither reborn nor transmigrated. She relied heavily on her intelligence. Her father had raised her as a son. Ancient women didn't participate in politics, so they didn't need to study, but Feng Sheng's father was very thorough in her education and even told her some dark political secrets.

2. FL is disguised as a man for half of the story. Having cross-dressed most of her life, she admitted that dressing up as a boy wasn't merely about wearing clothes tailored for men, but gestures and habits also needed to be learned and perfected to make it fool-proof. Her father being the head of the household, she also registered her male persona in their household registry and fabricated a believable story about how she had a twin, but the other had to live in the temple due to illness.

3. Aside from meeting the right person (not ML) at a critical juncture, FL's overall success was mostly earned by herself... well, if you don't count the ML saving her life twice...

4. FL is very self-aware and confident, but not too overconfident. She knows just how powerful her enemy is, and that she will be swallowed whole if she decides to investigate her father's case in great fanfare. Who was she? In her male disguise, she was just a young and intelligent scholar. She had to do everything methodically, with the help of other people.

5. FL also knew that to be able to succeed, she had to gamble. As I mentioned, she wasn't too overconfident. She had to really weigh her options and take great risks... even gamble with her own life.

6. ML had a very clear goal from the start, and he never let his feelings for the FL sway his plans. They were two people walking different paths in the beginning, and only when the situation favored them did he actually move the FL towards his direction and start incorporating her in his own plans.

7. ML is quite ambitious but his situation is delicate, so he has little room to maneuver his schemes and has to be extremely patient. He isn't OP and suffers the consequences of his decisions.

8. A wise emperor and father, who treated all of his sons equally and didn't favor any of them despite favoring ML's mother.

9. A somewhat realistic timeline. FL didn't immediately overturn her father's case once she set her mind to it. It took her a couple years and quite a lot of effort. It was a step-by-step process of trial and error with the aid of several talented people.

10. ML does have some rivals, but they were never forceful with MC despite their feelings. They respected her abilities, and they knew when to let go.

11. A couple years after marriage, the ML had to leave for a mission assigned to him by the emperor. It was at a critical time in the imperial court, so there were several people tripping him up, but the FL used her smarts to scheme for him so he could successfully finish his mission.

12. They strive to be harmonious in their marriage and plan together, and the ML trusts and is in great awe of FL's abilities that he lets her attend his private meetings with his subordinates. They also open an academy together after brainstorming for it for quite some time.

13. A loving relationship between in-laws. ML's mother is actually the MC in one of the author's other works, Ying Chong. Here, we witness her relationship with the emperor in the timeline before her rebirth. (I also gave that one 5 stars! Also a great story.)

15. Smart antagonists, with scheming abilities on par with our main leads.

16. Their children are adorable and hilarious.

[collapse]
Overall, as a fan of political intrigue and court struggles, I very much enjoy the plot and give it a 5/5. <<less
12 Likes · Like Permalink | Report
Leave a Review (Guidelines)
You must be logged in to rate and post a review. Register an account to get started.