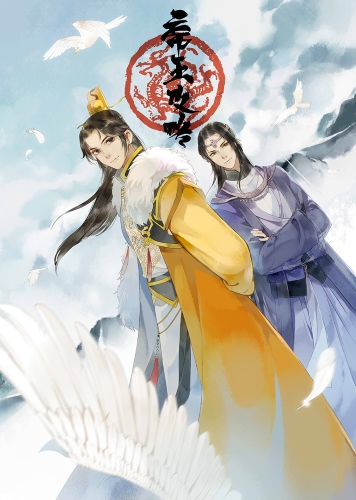 Status in Country of Origin. One entry per line
193 Chapters + 8 Extras (Complete)

As part of the imperial family, every move by Chu Yuan in this game of chess is made with apprehension, fearing that with a moment of inattentiveness, the whole match will be lost in a single move.

Ascending to the throne at eighteen, not half a year passes before civil strife erupts in Yun Nan. Though the thoughts of the old guard at the imperial court are not exactly identical, they are all waiting to see how the new emperor will put an end to this.

Unexpectedly, before this side could make a move, a few thousand miles away, the King of Xi Nan, Duan Bai Yue, had already personally commanded troops to attack in all directions; not half a year had passed when peace was restored.

Sparse moonlight shines into the palace; Chu Yuan stamped the wax seal himself, and had a secret letter sent urgently to Yun Nan 800 miles away — this time, what must we(1) give in exchange?

Brush marks passed through the back of the paper; it almost can be seen, when writing this line, how angry the young emperor was.

Duan Bai Yue spread out a piece of paper unhurriedly, replying with only one word.

Note on the story: This is a character focused story, please don’t expect too much court intrigue.
It’s a slow burn story about two people in love and the things they are willing to do for each other.

One entry per line
The Emperor's Strategy
帝王攻略

The Big Landlord (2)
Flowers Reflecting The Sky (1)
Heaven Official’s Blessing (1)
Let Me Tease You (1)
So What If You’ve Been Reborn? (1)
Spring Trees and Sunset Clouds (1)

These are recommendation lists which contains Di Wang Gong Lue. You should give them a visit if you're looking for similar novels to read. Alternatively, you can also create your own list.
More Lists >>>

Note that this book is actually the last of a series of 4 interconnected novels, starting with "Everywhere in Jianghu is Wonderful". The main characters in the other novels do appear in this one, but it is NOT necessary to have read the previous ones to understand this one, although you'll know a little more about the side characters if you have read the previous books. This story is POV-switching, so it took me a little while to get used to it - I'm really glad the author chose to do... more>> this, as all the side characters and their interactions with each other (and the mains) are very interesting. The plot doesn't move very quickly, and in fact the entire novel spans quite a few years. However, I really love the development in the relationship between our MC (Chu Yuan) and ML (Duan Bai Yue), which takes a few twists and turns before the end. Story-wise, I felt that it was kinda slow near the end, but the characters were so engaging that I couldn't ever give them up, and the humor is always on-point, so even slow parts weren't boring. Quite an easy read despite the wuxia/palace tag, no complicated political plots, and the cast of characters is easy to follow. I kinda hoped for more about the past interactions of our MC and ML, because when the story starts they already knew each other for a long time. However, it's just a minor thing, and overall I'd happily recommend this story to anyone who likes BL in the ancient chinese context. <<less
34 Likes · Like Permalink | Report

Everything the review above mine has touched on is spot on, so I shan't belabour the point. This is not an wuxia novel with a touch of romance to spice things up- this is quite clearly a Romance novel that happens to have an Wuxia setting! There's no Game-of-Thrones-esque political shenanigans to be found here- whatever politics depicted in the book is honestly very simple, easy to follow, and plainly meant to be a crutch to emphasise certain milestones in the development of the relationship between the two mains. If... more>> you came into this novel primarily wanting an Wuxia novel complete with political manuevering, treachery, betrayal, yada yada.... you're probably going to be disappointed. On the other hand, this novel excels on the romantic front. The development of the relationship between the two mains is wholesome, organic, and just plain beautiful to read. I confess to shedding tears along the way at some points, but all's well that ends well, if that is a concern to some. Not to mention that this novel is bitingly funny, and overall paced excellently barring say maybe the last 10 chapters or so- agree with the above that it got a bit draggy, but perhaps that was telling of the author's reluctance to pen an ending for these beloved characters. I can relate- I only just finished off the last chapter mere minutes ago, and I am already reluctant to bid these familiar characters goodbye. On a whole, would highly, highly recommend. Not sure why this novel hasn't gained as much traction as it should have seeing as it is well written and even has a manhwa and animation out. Hopefully it gains the status it deserves soon. <<less
13 Likes · Like Permalink | Report

watch the anime/donghua first, then read this novel! That'd be the best arrangement! Because why, after you watch the anime you'll be able to imagine the characters and places here more vividly when reading the novel. Other than that, you'll gain more understanding of the story cause the anime got many scenes cut off from the original plot here. So, you'll love it even more!
8 Likes · Like Permalink | Report

This novel is good, my fellow readers... You should really give it a try. You'll encounter some comedic scenes that making your tummy ache due to too much laughing. LOL But there are only 2 reviews here, so I will add one, using the most basic and simple way to describe this story. The relationship between the emperor and Xi Nan King isnt at all complex after all. Sometimes you should said that it is funny (LMAO). I kinda expect deeper political schemes but too bad, ML had done his role too... more>> awesomely, soo I was quite disapointed. Sometimes I dont like it if the ML is too much a doting lover. Since our MC is an emperor, then why dont let him do much moreee... But still I love our emperor so muchhh :3 he is funny BTW, our ML's younger brother is very mischievous. His appearance makes many hilarious scenes. But overall, the romance in this novel is something really sweet. Really really enjoyable <<less
3 Likes · Like Permalink | Report

I am still in chapter 21 but I can't help praising how good this novel is. The political strategies are really well written and something even more amazing than the top notch romance is the humour!!!! The side characters are so funny, literally everyone, from the emperor's eunuch to the Xi Nan king's subordinate, everyone ships the emperor and the xi nan king😂😂The xi manor's young master is rlly lovable and their teacher only exists to make the readers laugh and of course give love advice to our ML. Really... more>> a must read!!! <<less
2 Likes · Like Permalink | Report
Leave a Review (Guidelines)
You must be logged in to rate and post a review. Register an account to get started.