Novel Updates
RegisterLogin
Theme
Search
Your changes has been saved.
Your Majesty Please Calm Down 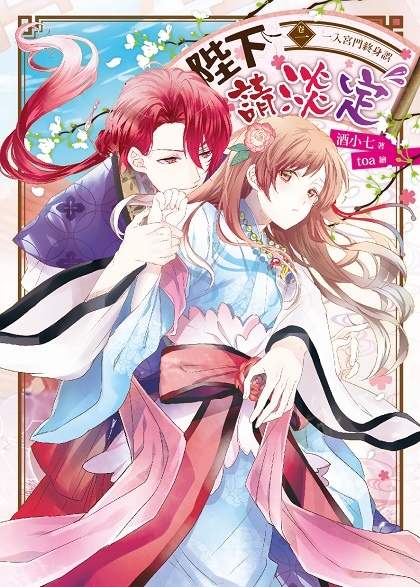 Status in Country of Origin. One entry per line
104 chapters + 3 extras (Completed)

As a eunuch, Tian Qi’s ba zi* was harder than diamond-plated gold drill. Although her ba zi easily brought an end to three consecutive masters, the Emperor was not afraid to be the next casualty and got her to serve at Qian Qing Palace.

Although His Majesty looked like a handsome gentleman, his behavior was more like a hooligan. Once, the Emperor touched Tian Qi’s lower abdomen and started to wonder at the amazing flatness of the area…

*八字 a Feng Shui term that refers to one’s date and time of birth, or the destiny that one is born with

The Eunuch is Pregnant (3)
Your Highness, I Know My Wrongs (2)
Favored Intelligent Concubine (1)
The Fierce Illegitimate Miss (1)
Wife, You Can’t Run After Eating (1)
Reborn as My Love Rival’s Wife (1)

These are recommendation lists which contains Your Majesty Please Calm Down. You should give them a visit if you're looking for similar novels to read. Alternatively, you can also create your own list.
More Lists >>>

Write a Review
16 Reviews sorted by

A good story, pretty much a lighthearted one with some tension. That sadly ruined by the stiff and confusing translation, esp the 3rd one. So minus 2☆.
2 Likes · Like Permalink | Report

This is one of the funniest stories I have ever read. The MC is a girl masquerading as an eunuch and after a series of events, ends up serving the Emperor. She's witty and charming but also naive. In the end, she ends up capturing the attention of the ML, the emperor. ... more>>
Spoiler

MC uses her wits to get out of sticky situations. Two of her favorite tricks is to pretend to be sick (her eunuch friend is from a medical background) and to tell the emperor that she likes him. Of course that backfires on her in the end!

[collapse]
The emperor isn't your typical ML. Sure, it's clear that he's smart, capable, and by all accounts, ruthless (unless it comes down to the MC of course) but he's also quirky and as the MC likes to think, prone to bouts of craziness because his mood fluctuates so often whenever he's around the MC. His struggle dealing with his 'homosexuality' is absolutely hilarious. There are times the book does end up making you blush, if you know what I mean.
Spoiler

[collapse]
The supporting characters are also very endearing. The MC's friends and the second lead are always supportive and there's even a turtle involved! The MC has many adventures with her group of friends and the ML's son so that even without the ML, the story is still interesting and a page turner. Everything moves quickly and conflicts are resolved quickly. Overall it's a very easy, light read that I highly, highly recommend. <<less
31 Likes · Like Permalink | Report

I recommend that potential readers check out the first few chapters of To Be a Virtuous Wife before reading this. These two stories share the same vocabulary that is unique to the Imperial Palace. I recommend another story because that translation provides really good footnotes and explainations. Even if you are already familiar with terms such as nucai and know the titles for the different concubines, I still recommend it in order to give this translation time to go beyond three chapters. The story:
Tian Qi is a servant in the... more>> imperial palace. It is hard to tell at this point, but I think Tang Qi is also a woman disguising as a man so that she can have the better paying and trusted position as a eunuch. Every master she has served has treated her well (?) only to die a tragic death. Her latest master has died in childbirth leading to some unexpected encounters with the Emporer himself. As a story it seems pretty solid with potential for mystery, intrigue, and forbidden romance. The quality:
The translator seems to be translating as an exercise to improve their English, mainly relying on a machine translator and dictionary. The sentences are a little choppy as a result. Unfortunately, the story is placed in the imperial palace which means that there are a large amount of phrases and titles that do not translate into english well. Either of these are not a real problem but together it makes it very difficult to understand what is going on. There is significant improvement from chapter one to chapter three, so I'm definately not giving up on the translator yet. :) The one star reviews are probably because of this issue. <<less

Fairly entertaining read. The female protagonist is a genuinely interesting character, a rare combination of being witty and street smart rather than a damsel-in-distress or OP-assassin/doctor as with most josei-type Chinese novels. Came across this novel while looking up a popular 2017 Chinese drama 那年花开月正圆 ("Nothing Gold Can Stay"), quite similar female leads. Quick summary: Female protagonist (Tian Qi) hides as an eunuch for unknown reasons in the Imperial Palace, catches the fancy of the emperor through her wits (and beauty), and a fairly typical romance ensues (reference the Chinese legend "Butterfly Lovers"). It's the light comedic writing style that carries the novel. But dropped it midway in the Chinese raws. As some reviewers have pointed out, it's a thinly disguised yaoi novel (updated genre tags to reflect it), starting around chapter 20... more>> onwards. Author acknowledges in post-comments that male lead goes from straight-gay-straight. It's pretty obvious that author is a fujoshi. Author has written several other novels with some success in China. Parts of the novel involve (non-plot-critical) : - Several male characters who question their sexuality after being attracted to the female protagonist. They repeatedly deny being gay, but proceed to sexually assault the female protagonist while she is unaware (kissing and groping her while she is unconscious or too naive to realize what's happening), then hypocritically stop themselves and claim that they shouldn't proceed any further, otherwise they would be taking advantage of her (they still think she is male). Those are exact translations, I'm not making it up.
- Male leads are all exceedingly beautiful (not handsome, just beautiful) and referenced as potential gigolos/gay
- Beautiful male child is cross-dressed, just because.
- Repeated discussions throughout the novel about how BL/LGBT is starting to become acceptable in society. Not knocking on the yaoi genre, whatever floats your boat. But let's call a spade a spade. <<less

Tian Qi is a stunning looking girl who's disguising as an enunch in the royal palace. The original reason and her identity is slowly revealed during the story. However, due to her greed and another hidden reason, she missed her opportunity to leave and was stuck serving the emperor even though her two previous masters died.

The story explores her relationship developed with the people she meet, problems arising from her current identity and her beauty, and a variety of hilarious situations she fell into, while solving the mystery about her past.

Although, there are some tragic and tense situations, the story has a happy and generally lighthearted tone. It does not attempt to envoke any overly emotional response and is not very dramatic. The various situations she faces are generally solved quickly and logically.
The story has a very nice pace and is very well written. It is a pretty fun and casual read throughout.

This story is followed in sequel by "Tiao Xiao Ling" which is also pretty good. No translation though.

WHY IS THE VOTE COUNT SO LOW???!!! The grammar might be bad but at least it's still readable, at least more readable than similar stories with bad grammar, that still get heaps of good votes. Anyways, if you can get past the grammar the story is actually very interesting
6 Likes · Like Permalink | Report

This novel is one that presents a look at the complexities of living as a servant in the palace. It not just a matter of whether you can effectively service your royals. But also how you can avoid the intrigue and back biting issues of the royals and their subordinates and retain your life. Especially if you are a cross dressing eunuch. Read this novel and take a ride that will have you giggling, crossing your brows and worrying if the main character will make it through the day safely.
5 Likes · Like Permalink | Report

Funny story, with characters who misunderstand each other left right and centre. I picked up the translation on my blog but I`m not aware how to edit the chapters info. Sorry.
4 Likes · Like Permalink | Report

At the beginning it’s funny. The comedy is pure gold. The MC is quite intelligent. The ML is sufferring funnily.
Spoiler

At the middle to the end part is where the story kicks in and get a bit serious. We will see who the real enemy is, who did this, who did that.

[collapse]
There is a smut later on.
Spoiler

They got married and lived happily ever after in the end.

Had to drop the story. It was fun and quirky but I got bored throughout the chapters. Still a 5* though since I enjoyed it while it lasted.
2 Likes · Like Permalink | Report

The story is very enjoyable and although it has a genderbender tag it's really good. I read the raws for this story probably a year or 2 ago because I was so entranced by the chapters out at the time. The interaction between the ML and MC is good with lots of comedy/misunderstandings and eventual feelings *cough*. Also seeing the ML question themselves was fun. I also enjoyed how it isn't like 1000 chapters long and would suggest reading it. C:
1 Likes · Like Permalink | Report

This story funny and really heart-warming! Really recommend it! Usually, there is scheme which is cruel in the royal palace. But this novel is really into scheming but its really funny rofl Cant wait till the next chapter😙
1 Likes · Like Permalink | Report

Really good gender-blender novel!! I love the MC's interaction with ML's kid, too cute!! This novel is also funny cause the MC is awesome with her thought process!!
1 Likes · Like Permalink | Report

I can't stop laughing this is so funny and cute tho the translation in some chapter are quite confusing but you'll somehow understand it still so just give this a try u won't be dissapointed. The funny things start showing after some chapters
0 Likes · Like Permalink | Report

Dont trust the summary/ introduction above. It is really bad anyways. This is actually an amazingly well written plot (I appreciate thought being put into character motivation and conflict. Makes it better)
0 Likes · Like Permalink | Report
Leave a Review (Guidelines)
You must be logged in to rate and post a review. Register an account to get started.