Novel Updates
RegisterLogin
Theme
Search
Your changes has been saved.
This Is an Obvious Fraudulent Marriage

Home >
Novel >
This Is an Obvious Fraudulent Marriage 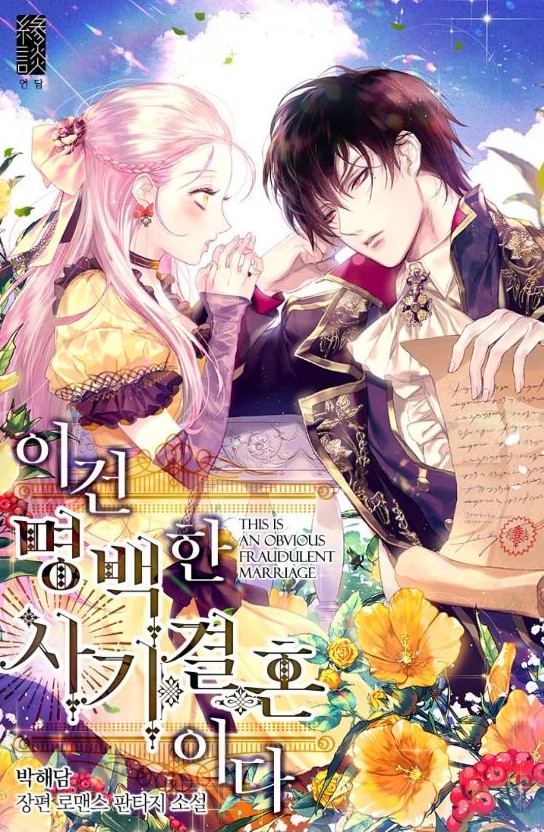 One entry per line
박해담

One entry per line
AKGIE

Status in Country of Origin. One entry per line
182 Chapters (Complete)

One entry per line
Yeondam

I asked an information guild to arrange a matchmaking.

I just needed someone to be my husband for a year.

The information guild chief, who heard the request, offered to be my temporary husband?

He is handsome….No, I was married because the conditions were okay, but suddenly the emperor gave my husband a title?

“What? The Grand Duke of Carriard?”

That crazy warlord, murderer, the nightmare of the whole continent, that reckless guy is the incarnation of the evil who calls the blood?

Help me! I’ve been swindled!

The devilish red eyes glared at her. One more word and he will kill her. Will Leyrin be able to get out of her scary husband and escape a fraudulent marriage?

These are recommendation lists which contains This Is an Obvious Fraudulent Marriage. You should give them a visit if you're looking for similar novels to read. Alternatively, you can also create your own list.
More Lists >>>


Write a Review
3 Reviews sorted by

This is a nice novel I would reccomend the story. It has a webtoon on it too and yeah... ... more>>
Spoiler

The girl is the heir to a count title but has to be married in order to inherit it. So she goes to a guild and asks them to search eligible guys for her who have titles lower than that of countess.

The ML was the leader of the guild and tricks her into marrying him. A contractual marriage of 1 year.

Plot twist is that the ML is actually the crazy killer who had acquired the kingdom FL stays in for the emperor. He also has some powers. And then hes given the title of Arch Duke of Sofen sofen is the kingdom in which global had stayedwhich he accepts thinking the FL will like it since she wanted to manage her country land. So she ends up becoming the Arch Duchess / Grand Duchess.

Then there is another twist. The story involves gods. The ML was created by 2 gods to seal gods and the FL is some one who is very dear to the gods and and also has the power to calm down the ML. As is the MLs power kind of drive him crazy with bloodlust.

Leaving that aside this was the story background

[collapse]
And it's a good read with the MLs cute actions and the FLs fangirling and etc If u liked lucia u might like this too not verryy similar but kind of in the feelings area... <<less
2 Likes · Like Permalink | Report

I know it’s way to early to write a review but I just wanted to help those of you who want to read this. FYI this does have a manhwa adaptions so feel free to check that out. Also keep in mind that I will reference the manhwa but by no means am I comparing them it’s just to get the general idea of the story. Few things: The FL is a sucker for handsome men like the ML some of you might find her shallow so don’t read it if you... more>> feel like that. It’s about contract marriage which for me it’s always a plus.I suppose there’s a little bit of mystery surrounding the Ml....I can only say this much because there is only one chapter so far and I don’t want give spoilers but overall if you like a shamelessly FL and a soft pampering husband disguised as the bad guy then this is the story for you!!! <<less
2 Likes · Like Permalink | Report

Story premise is interesting. I am happy to see more korean stories on NU. The translations confuse me sometimes, there are a lot of dialogues and many times I'm not sure which character is speaking.
0 Likes · Like Permalink | Report
Leave a Review (Guidelines)
You must be logged in to rate and post a review. Register an account to get started.