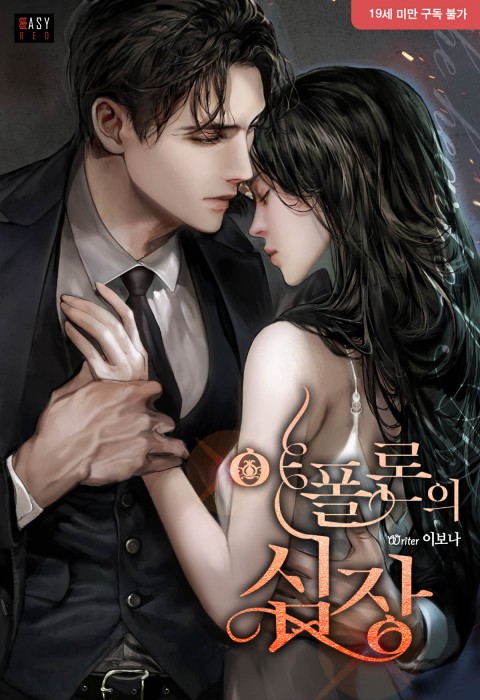 In the busy lobby, the woman whom he believed had died years ago appeared before his eyes. Yet, once again, he lost her in the sea of faces.

“Who is this Jin Hye-Yeon you are looking for?”

Instead of answering, Tae-Jun pulled out a cigarette from his cigar case, lit it up and continued searching through the hotel’s visitors list.

“Is that your lover who died four years ago?”

Tae-jun finally looked up, “… How do you know about her?”

Transmigration: Raising the Child of the Male Lead Boss (2)
Under the Oak Tree (2)
Beatrice (1)
Living As the Villainess Queen (1)
The Man’s Perfect Wife (1)
Doppio Senso (1)

These are recommendation lists which contains Apollo’s Heart. You should give them a visit if you're looking for similar novels to read. Alternatively, you can also create your own list.
More Lists >>>

another r*pey novel. The ML is basically a creep & the FL literally has ptsd bcos of the ml. Its funny that this is tagged here as "award winning work" when it is so painfully bad. This is jus another stockholm syndrome 'romance' novel
25 Likes · Like Permalink | Report

Yeah the plot is good this far, yeah I could understand the contract thing will make people angry also about her father but I think people need to see the reality in the novels, every time we can't have 'fantasy' things. So far I really liked the story, the author has done a good job in describing the emotions of the characters specially and the R19 scenes are also pretty good, all over I enjoyed it.
10 Likes · Like Permalink | Report

To those who don’t like the first few chapters, same here. I misjudged this novel at first due to how extreme the ML seemed to be and felt afraid to read further since I’m not personally a fan of darker themed romances. However! This is turning out to be unexpectedly well written and intriguing. Like any story, it takes time to develop the characters and present each of their backgrounds and motives. It’s still building, after only 20+ chapters. The plot is slowly being fleshed out as we read on, learning... more>> about who everyone in this world is and how they are all involved with each other. Yes, the ML has a very yandere personality towards the FL but I think we’re only just starting to get to know him so, gotta read more before I can truly say anything else. I think this is a novel worth reading, especially since there’s a bit more to read now and binge in one go. Give it a try! <<less
8 Likes · Like Permalink | Report

The whole plot is kinda intriguing and interesting because it makes you feel suspenseful on what should happen next. The mystery involved in the past would slowly show the true case of female lead's death which is I suspect to be a well planned between fake or true murder. Both the leading characters developed mental health disorder or condition making their relationship not easy to mend for it complement the thoughts and feelings surround them.
4 Likes · Like Permalink | Report

The plot's pretty good. However as a person I feel extremely bad for MC, and pissed at the ML for forcing himself upon her. Idk where the story will go, I'm still only at chapter 54 because that's the only chapters translated so far, for now I'm hoping they don't end up together. Edit: ... more>>
Spoiler

I HATE IT. I HATE IT. I hate how they ended up together despite every hell she's been through because of the scumbags around her, and it all started because of this damn ML and president Jin. These 2 manipulative sons of b*tches destroyed her life permanently. This ML is s*upid as shit, he shoulda atleast realized that MC's amnesia is caused due to the trauma she's been on, including the ML's doing. And this is how her brain reacted and is withdrawing herself from all the bullshit, because it's too hard to bear. God but no, after he found out about her amnesia he pushed himself to her even more then threatened her or else he's going to make her life a living hell and mess her up even more than she already is, AND r*peD HER when she expressed how disgusted she is with him and how he torments her n all. THEN OUR MC ATTEMPTED TO COMMIT SUICIDE, OF COURSE SHE'S FOUND BY ML, THEN HIS THOUGHT PROCESS GOES HOW IF MADE HIM ALOT MORE OBSESSED AND POSESSIVE TOWARDS HER. Ughsjsdnixdnfkk uggghhh.

I was really hoping for MC to be happy and move on completely from the that son of a bit*h and realize how disgusting he actually is and hope he'd crumble and regret every single thing he did to her every day he lives until he's dead. It would've been breath of fresh air if it actually ended like that. Honestly it's infuriating.

Regardless, atleast MC is happy.

Out of all the stockholm syndrome typa novels i've read, this must be the most infuriating one together with "I don't want to be loved". It's well-written. Plotwise it's great too, It's just how they ended up together in the end ticks me off. <<less
2 Likes · Like Permalink | Report

I must say, it’s really a great story, but the pacing of translation doesn’t let readers to connect with the story! The chapters are short and updates are late, so when reader get to connect the chapter is already done! The pacing is already slow, so doing that make readers uninterested... still, one of my fave in wordexpert! It’s getting to the exciting parts hope we see more juicy chapters coming up! thanks for translation tho! Appreciate the efforts.
2 Likes · Like Permalink | Report

So underrated. Is a mystery, and we have to piece things together as they come. There are various plot twists as you read it, but they are all plausible and compelling. No, she doesn't have PTSD because of him. Judging something and getting the facts wrong is quite ridiculous. ... more>>
Spoiler

Since she has amnesia, she has been obsessing about him but doesn't remember who he is. She remember his shape, his feel and etc.

[collapse]
Things are shed in a fairly realistic light. No one-dimensional antagonist, just many people, each with their drives and objectives. If I were to say, yeah, Tae-Jun is a bad guy. But that's kinda obvious since the begining, yet very nuanced. As we get into his psyche we see more sides of him, and the why's. Being a bad person, is not literarily bad, it can make very good characters. The FL is independent, troubled and smart. No complaints about her. She handles her sh*t very well, even thought she is tormented. When do they meet:
Spoiler

OMG! One of my favourite 😍 I really love wordexcerpt works ❤ they are great and really work hard. I'll be forever supporting this team 😘 Love from PH
1 Likes · Like Permalink | Report

It's really amazing novel, it's not all about love & stuff but also about some unsolved mystery. I like the characters style it makes them more of mature & charismatic personality persons. It gives different vibes I mean the whole novel also the MC is truly example of Apollo himself. I love how the FM is strong & dealing with him. I hope the author keeps this up & will give us some MORE!!❤
0 Likes · Like Permalink | Report
Advertisements
Leave a Review (Guidelines)
You must be logged in to rate and post a review. Register an account to get started.

Sorceress!? I am what?