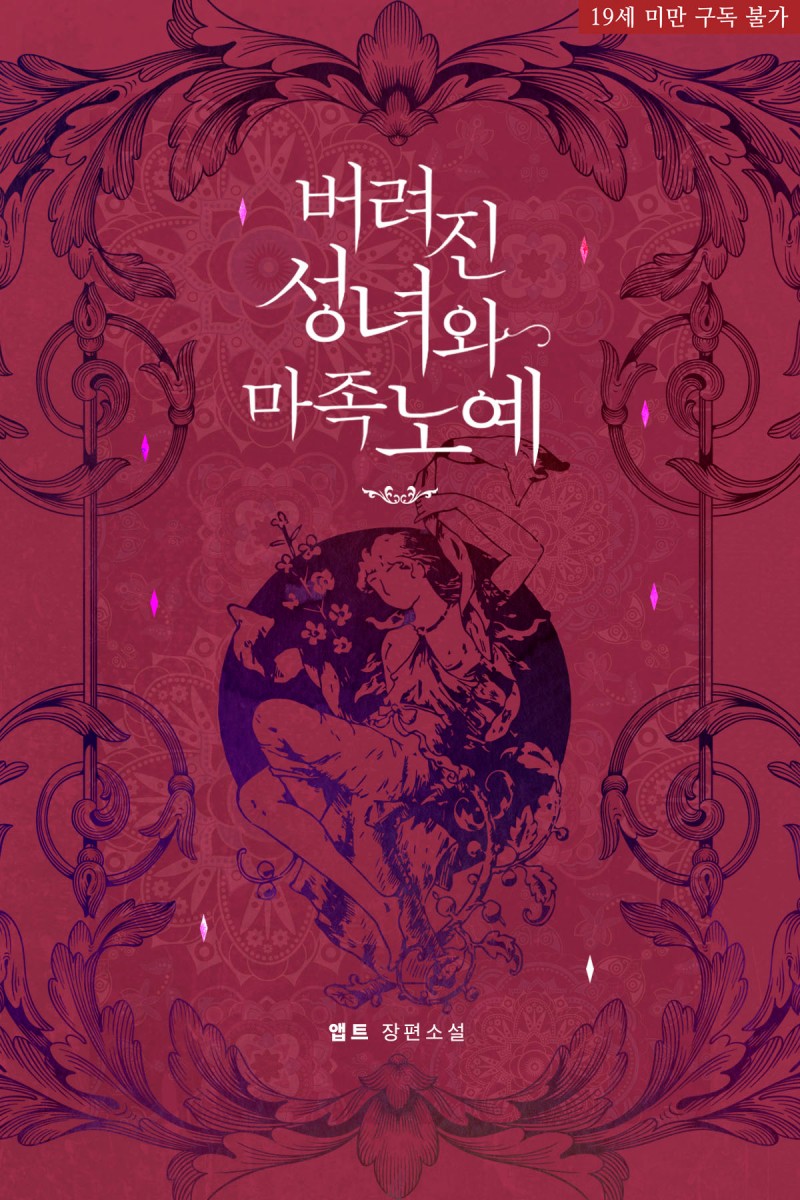 One entry per line
Apt
앱트

Saintess Yoo Jinah, who came from another world, brought victory in the war against the demons.

Her joy of being able to return home was short-lived; Jinah collapsed after being struck by the demon king’s final blow

After waking up from a death-like agony, she had no more divine power left and was abandoned after fulfilling her purpose.

A year later, Jinah who was completely ignored and unable to return home, secluded herself in a lonesome place.

She learned that s*avery, which she had abolished long ago, had been revived; demons were being secretly bought and sold as s*aves. Yoo Jinah, who secretly participated in a s*ave auction, was reunited with the former demon general Varat Baal.

Even if the world had abandoned her, Jinah still decided to bid on him for their sake— the heinous demon Varat Baal could not be released.

The thought of living with Varat, who was infamous for his cruelty, made her worried sick.

Like this, the cohabitation life with a demon s*ave who was far too sexy for the saintess had begun.

These are recommendation lists which contains Abandoned Saintess and Demon S*ave. You should give them a visit if you're looking for similar novels to read. Alternatively, you can also create your own list.
More Lists >>>

Wooo... is it hot in here or what? 🔥🔥🔥 This is incredible! I know it's only 4 chapters right now, but I was totally here for this story!!! 😆✨ I loved the FL! She wasn't cringe at all and the author (and translation team) does such a good job describing her motivations. Basically, the FL was isekai-ed to another realm and declared the Saintess. Her only way home is to take up the role and defeat the demon king. So the FL trains and fights for 10 years and then finally defeats... more>> the demon king. Except, as she defeats him, she is injured and all her Saintess powers disappear. The King and high level politicians then abandon her because she is no longer holy, and tell the kingdom that she was returned home by the goddess. Abandoned and injured, the FL becomes a recluse until one day she is doing errands and finds out that s*avery, that she thought she had worked hard to abolish, is in fact back. Angered, she goes to check it out, and finds that one of the top demon generals is being sold. She is shocked. Reluctantly, she decides to buy him to protect the people bidding on him. Because even though she has been abandoned and the people at the s*ave auction aren't exactly innocent, she can't easily let go of the Saintess role that was drilled into her over the past 10 years that has taught her to sacrifice herself to protect humans. Anyways, that is how the demon general and abandoned saintess start to live together. I also want to give a super big kudos to the translation team. I won't say I'm a web novel expert, but this has definitely been one of the best translations I've ever read. 👏 Plot Score: 8/10 - Pretty interesting concept. Very unique for an isekai web novel. Horny Score: 9/10 - Waste no time to get into it! Score: 8.5/10 - I'll definitely be watching this one. <<less
0 Likes · Like Permalink | Report

I love it, It's not cringy at all, and it's super addicting. I find it a shame it did not be translated entirely!! How can it state completed in the status of COO? I want more updates! Can anybody tell me where this continued? Please! Please! T-T!
5 Likes · Like Permalink | Report
Leave a Review (Guidelines)
You must be logged in to rate and post a review. Register an account to get started.

transmigrated with a system for an...