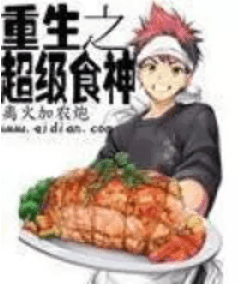 Status in Country of Origin. One entry per line
544 Chapters (Completed)

A chef found himself resurrected in parallel world. This world is almost similar to his own. Except there was uprising caused by vegetarians nearly 80 years ago, which made it dangerous for people to consume meat. As a result, innumerable vegetarian delicacies appeared and meat based dishes became almost non-existent.

With the virus gone, the government is trying to reintroduce meat based dishes again. But sadly, many recipes for meat dishes have been lost during the uprising.

Armed with his knowledge as a chef of all kinds of dishes, meat, fish and more, will Chef Ye Chui be able to bring about a revolution in this vegetarian based world?

One entry per line
重生之超级食神

These are recommendation lists which contains Reborn – Super Chef. You should give them a visit if you're looking for similar novels to read. Alternatively, you can also create your own list.
More Lists >>>

This world has a dumb star system. A chef can be ranked with up to 9 stars. There is a dumb age restriction for each star. This ruined the novel for me. You must have at least 1 star to open a commoners restaurant. You must be at least 20 years old to become a 2 star chef and 25 years old to become a 3 star. There is no age restriction after that. The author did this to suppress the MC's fame. The MC is already good enough to... more>> be a 9 star chef. Everybody will look down on him being a 1 star chef now though. It feels cheap and tasteless. <<less
11 Likes · Like Permalink | Report

(May contain a few small spoilers) This has an interesting idea of the alternate world going through a period of eating only vegetarian or vegan due to some virus in meat. Like all viruses, it gets solved, but too late. Most people had gotten used to eating vegetarian and have no concept of meat dishes. This is where our main character comes in. He has transmigrated from our Earth where meat dishes are still abundant. Being our MC, his cheat is the fact that he was a well-known chef... more>> in his previous life and knows how to cook good meat dishes. This is is our MC's starting point. Meat dishes are unique and he is the only one with the knowledge on how to make them. The novel does not have a bad start and is a pleasant read. I just tend to avoid ones where romance can deviate what I consider the main plot. A few chapters in and I could tell that our MC will also have some romantic side plot. I rather focus on the food and the effect it is having in this new world. Note: The picture will cause people to misunderstand the main idea of the novel. <<less
5 Likes · Like Permalink | Report

I found judging a novel solely from its cover image is a disgusting way to do. I bet all of this 1-star raters didn't even read the novel or just trolling. This story has nothing to do in the cover nor it is a parody of it, and definitely not like the shite parody novel that came before. ... more>>
Spoiler

This is about a peak world-class chef died due to exhaustion after reviving the long lost Imperial Feast. The next thing happened is, he reincarnated (possession) to a younger body that has the same name as him. He found out the world is not the same, but it is an parallel one, where the world succumbed to a disease that force them to become an herbivore, else they're dead, even after the vaccine was found, it's already too late, many of the meat-based dishes are lost due to the passage of the time. MC on the other hand, has the arsenal of knowledge inside his head, which is a huge advantage of him, and superstar chef in the past life too.

[collapse]
Though, the MC is an uncle (middle-age man), he still forcefully enter the springtime of youth because of his new body's influence, so there is an romantic sub-plot. Nonetheless, it still a great novel. If you like reading cooking novels, then I hope you'll try this one. It has potential, and sincerely hoping that the next reviewer isn't a prick, but a rational one that read the story entirely (or at least read it till the latest translated one). <<less
4 Likes · Like Permalink | Report

Honestly when I saw the cover for this novel, the first thought I had was ' wow another parody of another popular manga' but I was WRONG!, the story is totally different and very unique, the only thing in common is cooking as the main theme. The weird thing is that in the original Chinese website the cover is that actual picture, why? ಠ_ಠ... I would like to know that as well. ¯\_ (ツ) _/¯ maybe he is a fan? ha ha ha 😂😂 In a world were meat dishes 🍖🍗🍤... more>> went through extinction due to a virus created by extreme vegetarians😱, 80 years passed after the great lost, a young and poor orphan worked everyday to keep his family alive ಥ_ಥ, after dying of over exhaustion the protagonist takes over his body and works his way to climb again the top of the culinary world, with no cheat codes or A.I., he uses his experience and skills accumulated over the years in his previous life to provide a better life for his parentless sisters👨‍👧‍👧 and teach all those people who looked down on his background, and lack of money. (•̀o•́) ง <<less
3 Likes · Like Permalink | Report

Not a bad story if you ignore the ridiculous setting. Just ignore the Vegetarian terrorists and the Gourmet police, replace them with whatever makes sense to you and it's a pretty fun read.
2 Likes · Like Permalink | Report

So far the novel has been fun to read. The translation is fairly good and easy to read. Would recommend to anyone that loves novels with cooking/food as a key part of the story.
1 Likes · Like Permalink | Report

Cant even wrapped my head around why people rate this 1 star... You might see the glaring 1 star review at the top and felt disheartened to read... But allow me to explain how his reasoning make BS sense...... more>> Like really? No more domesticated animals??!!! How do they make cure for the virus then??? Apocalyptic scenarios??!!! Plz people can easily survive without meat and there are fake meat to substitute the real meat... And I am sure when the government distributed the animals to farm, im quite sure they would 100% Definitely teach and give manual about how to take care of the respective animals especially in animal health care... (Rip for wild game) All in all... I would recommend this novel to people who like to read life stick and wouldn't mind some minor cliches. While the cooking isnt that indepth like gourmet food supplier the author do put in effort to research them. It cant be said that MC is smart but he is not dumb and hot blooded either (but if women is involved... really wtf man with all these chinese novel and jade skin females MC being smitten by them....) Is a good casual read... And it aleast deserves 3 star.. <<less
0 Likes · Like Permalink | Report
Leave a Review (Guidelines)
You must be logged in to rate and post a review. Register an account to get started.

The Broken System: What Bred a...