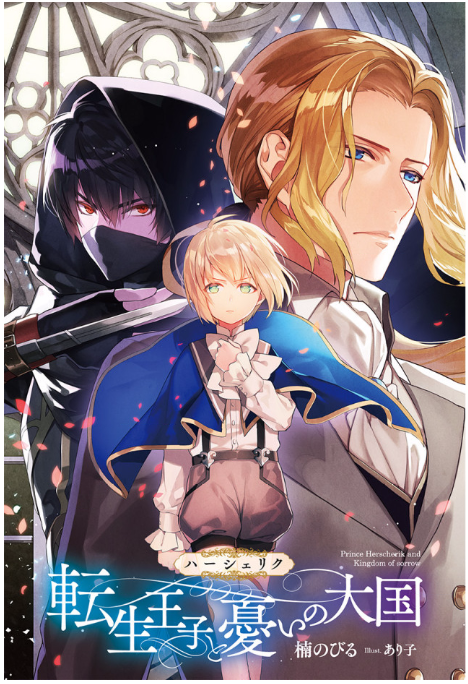 One entry per line
Arico
あり子

The day prior to female otaku Hayakawa Ryouko’s 35th birthday, she departed the world in a traffic accident. As she opened her eyes again, she was reincarnated into a beautiful blonde-haired prince of a great kingdom in a fantasy world.

In that great kingdom… In Greisis kingdom, there’s a king despised by his retainers, tyrant nobles, corrupt officials, and so on… It’s in a precarious situation.

For the sake of protecting his father and family, as well as helping the citizens, the reincarnated Prince Herscherik is determined to fight.

Making use of his skill as an office clerk in the past, being full of initiative in his nature along with his (otaku-ish) intellect, the reincarnated prince faces many kinds of incidents.

Books in this series:

I. Reincarnated Prince and the Kingdom of Sorrow

II. Reincarnated Prince and the Knight of Twilight

III. Reincarnated Prince and the Magus of White Rainbow

IV. Reincarnated Prince and the Hero of Light

V. Reincarnated Prince and the Pride of Warring Kingdom

Common Sense of a Duke’s Daughter (3)
Akuyaku Reijo Ni Koi Wo Shite (2)
The Elf Is a Freeloader (2)
How to Live as the Enemy Prince (2)
I Reincarnated as a Noble Girl Villainess But Why Did It Turn Out This Way? (2)
By A Slight Mistake (1)

These are recommendation lists which contains Herscherik (Reincarnated Prince Series). You should give them a visit if you're looking for similar novels to read. Alternatively, you can also create your own list.
More Lists >>>

Catching up to the newly updated chapters makes you stop and sigh at how beautiful everything flowed and how crisp and clean the translation was. If there's one novel that I would recommend for how unsuspecting and exciting it is, it would be this one.
0 Likes · Like Permalink | Report

This is an amazing series. I binge-read all 5 web-volumes of the Herscherik series (http://ncode. Syosetu. Com/s6899b/) in Japanese after discovering this. It's somewhat unusual, being a female->male reincarnation story. Despite being born as a prince (and therefore with many advantages), he is quite conscious about his own disadvantageous position within his family. If you're looking for a story where the MC powers up with plenty of cheats and defeats enemy armies single-handedly, look elsewhere. This series is fairly down-to-earth for a reincarnation story.
37 Likes · Like Permalink | Report

Okay so, I just started reading this story and to me, it is AWESOME. I love stories related to MC's transported to another world. The way how this story is being told, felt very "flow-y" to me. I love how this story is plotted out and how the story has series! I just love it! I am a big fanatic on stories related to characters being transported to another world! Can't wait for more updated chapters!
11 Likes · Like Permalink | Report

very good novel. After reading these first few translations and seeing the illustrations, I got interested and skimmed trough raw chapters with google translate. Allthough google translated raws are not well translated and a lot is lost like that, but I got the main gist of the story and it is honestly interesting. Protagonist and suporting characters are likeable and well thought, plot is deep and interesting and most of all I like how MC is not allpowerful superman and thus feels more realistic.
8 Likes · Like Permalink | Report

The king doesn’t do what he knows is right for the country because he’s a king and not a dictator. The King is an absolute monarch in this story, he is described as being a very powerful knight and magician. While being an autocrat may not always be for the best, when you know a minister poisoned literally the entire royal family... behead him... you don’t need a written confession, forge charges against him. All the subjects in the kingdom hate the aristocracy.. no one would storm the capital. If our MC... more>> truly cares about the kingdom or his father, he would channel his inner Machiavelli, and explain “the prince” to his dad (who’s a good guy who loves the MC, but is a terrible king). <<less
7 Likes · Like Permalink | Report

I am very happy to have stumbled upon this story. And to you who skimmed on the reviews, here's a few words from me: this novel reminds me of Common Sense of a Duke's Daughter and many more other like it. However, the story is still far too short to compare with the deep depth of Common Sense of a Duke's Daughter, but Herscherick just reminds me of that novel so much. Anyways, the protagonist reincarnates to another world, but to a body opposite of her gender. I don't know how... more>> this could possibly relate to the story, but it's something. The kingdom is corrupt. There's a story--it was mentioned--and a reason to push the protagonist to what he is going to become: a civil servant. As far as I'm reviewing the story, Herscherick is still in the process of learning on becoming one, so hopefully the story will remain the same pace as it is and not info dump on some s*upid reason and drag on the story. There's more info about the protagonist's previous life as an office lady--an accountant, I believe. The previous life isn't just simply a reason for the OP powers of the protagonist--which by the way he doesn't have (magic nor talent for swordsmanship). All he has is his experience as a 35-year old office lady from his past life, and his determination to make things right. He hasn't invented things that an average office lady shouldn't know about nor know of how its constructed, but I think that's not the focus of the story. There is a small bit of character development from the protagonist
Spoiler

Before he resolved to serve his kingdom, he had thoughts on living a comfortable life as an aristocrat and turning a blind eye to the corruption he was seeing. It was mentioned. The protagonist said so himself. But something happened and now he changed. I don't want to spoil too much so it's better if you actually read it.

[collapse]
and an in depth view on other characters, too. It molds them to life, in my opinion. They're not just there to glorify the protagonist like some god with unfathomable powers (which, again, he does not have). Lastly, a personal comment that probably has nothing to do with the review: I've been looking for several novels like this for a while, but ever since I have not discovered something as good as Herscherick--Common Sense of a Duke's Daughter aside. Honestly, the recommendations aren't great and have almost nothing common but superficial things with both stories. I shouldn't involve another novel in this review, but their striking comparisons just speaks to me. Both novels are about building a greater and better society while improving oneself as a person, a leader, and their other respective roles. They are wonderful not because of amazing, magical, supernatural powers, but for their wit, knowledge, deductions, and desire for something greater. Herscherick still hasn't gone through true tribulations like Iris did, but his will and determination is there. I feel like if he went through trials, he would suffer and doubt himself, but the rewards will be so sweet. It will be even more so for me as a reader if I see such a development in a character. Hopefully this would happen. I would love to see the protagonist grow, both in a literal sense (as he's still a child) and figurative sense. I see great potential in this novel, and I hope people will see that potential in it, too. I hope that it will not disappoint me. <<less
5 Likes · Like Permalink | Report

I already give a spoiler in the forum! Please read it in https://forum. Novelupdates. Com/threads/prince-herscherik-and-the-kingdom-of-sorrow.27521/#post-3448742 How author tell the story is little boring but the political plot is realistic, very detail, have a long history, and the main problem is good enough to read. Its like Pharmacy in another world plot novel if you read that novel till raw v6 lol. Ehm, Its story that tell about shota who collect many of bishounen guy lol, nonono its full of politic ahahaha
4 Likes · Like Permalink | Report

So far so good! It certainly seems interesting and proving to have a fun and energetic MC! Those illustrations also seem to promise awesome scenes and I am practically salivating in how the MC is going to make everything work out. Can't wait till there is more!
3 Likes · Like Permalink | Report

gaaaaaaaaaaaaaaaaaah only 2 chapters or so in and im already in tears what is this a combination of cuteness and tragedy ???? you lure me in with a cute looking MC and then SLASH AND SMASH AND DESTROY MA POOR HEART ಥ_ಥ (┳Д┳) dont mind me just ranting for my broken heart (T＿T) if im like this from only 2-4 chapters I wonder if I can last the whole novel （；へ：）anyway to all da brave translators that are breaking their hearts so we could read this masterpiece thank... more>> you very much....... please don't abandon dis （；へ：） (◕︿◕✿) I wanna give it 10000/100000 if I can ╥﹏╥ （>﹏<） (☍﹏⁰) ｡ (╥_╥) <<less
2 Likes · Like Permalink | Report

THIS IS GOLD. I mean, I always loved isekai but sometimes it can be tiring to always see that the MC is always so OP that the plot was just getting too distasteful. This one however, has a nice ring of having a placated MC. One of which has actual struggles and gets frustrated at his (her?) inabilities. Although it was kind of funny that this reminded me of Detective Conan, on the part that a kid is investigating undercover and using his (her?) child-like form to be inconspicuous, when there... more>> is already someone much older on the inside. This is a fun read and I just binged. Now, I'm happily awaiting the new chapters. Hope the update won't take too long :) <<less
1 Likes · Like Permalink | Report

SUPER RECOMMENDED if you like a political story with a little reincarnated theme spice I binge read this novel with MTL and I'm not regretting this. A good premise like Common Sense of Duke's Daughter, the protagonist didn't have cheat---wait, the cheats are the people that he recruited (lol). But a little different than Duke's Daughter, I think "reincarnated" theme have to be concluded, in retrospect of Hersche's age. He will be a weirdo (for the reader, he's already a weirdo for the people in the novel though), because his wisdom... more>> isn't something that a 3 y.o. Kid will have. <<less
0 Likes · Like Permalink | Report

Just finished reading until the latest chapter, and I must say, this is really really good! It kind of reminds me of Kuroshitsuji somewhat (but I won’t spoil why) haha. I love how she uses her past life skills and applies it to the kingdom. I actually want to read more novels about kingdom management because of this series! &Lt;333 All in all, I love this so much 💕 Plus, it doesn’t hurt that she’s collecting extremely skilled bishounen on the way to her dreams! Hahah this would be a reverse harem... more>> if she didnt become a boy xD Must read!! I wish it was completed so I could binge read till the end though huhu <<less
0 Likes · Like Permalink | Report
Leave a Review (Guidelines)
You must be logged in to rate and post a review. Register an account to get started.

The Emperor and the Tree, or...
Advertisements