Novel Updates
RegisterLogin
Theme
Search
Your changes has been saved.
Picked up a Strange Knight 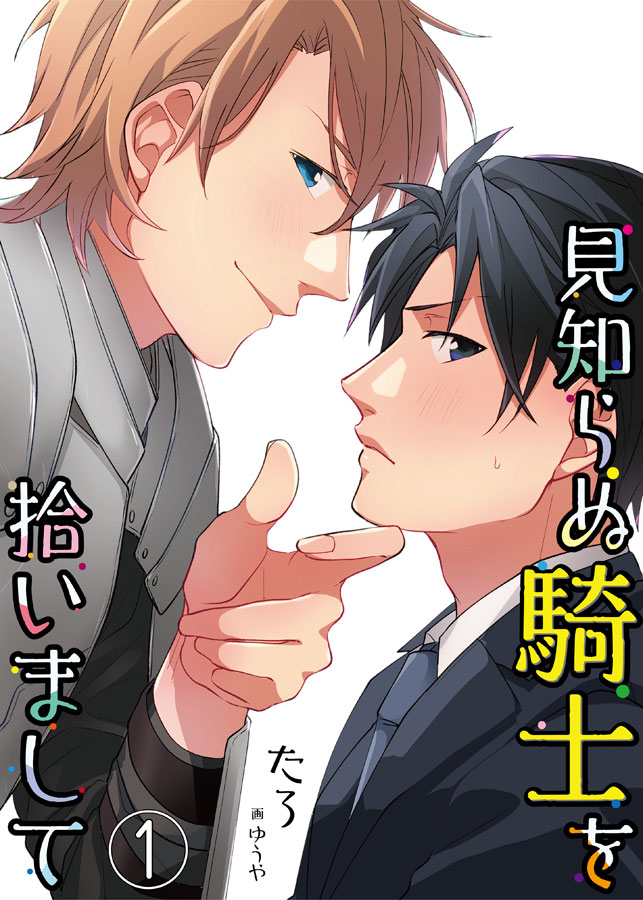 One entry per line
Taro
たろ

One entry per line
Yuuya
ゆうや

Status in Country of Origin. One entry per line
19 Chapters + 3 Extra (Completed)

One entry per line
DeNIMO
Syosetu

Sequel: Bringing My Wife Back from Another World

Brought My Wife Back from Another World (Sequel)

These are recommendation lists which contains Picked up a Strange Knight. You should give them a visit if you're looking for similar novels to read. Alternatively, you can also create your own list.
More Lists >>>

Write a Review
26 Reviews sorted by

Ahhh~ this is sweetness and bitterswet sadness rolled into 19 chapters and 3 extras~ sooo good! It's a great read whenever you're up for a break and read an emotional roller coaster (and smutty *insert wiggling eyebrows*) short story.
0 Likes · Like Permalink | Report

I translated this story because of how much I love the main characters. Azusa, the narrator, is a sassy and blunt salaryman who has a lot of pride but is also a bit lazy. Ilias, the knight from another world, is an earnest, hardworking, and excitable person who looks at the modern world with childlike wonder. The first half of the story focuses on the two of them getting acquainted. At first, when Azusa sees this random dude in front of his apartment, he thinks that Ilias must be some... more>> weirdo chuuni cosplayer. Still, he takes Ilias in and teaches him about modern-world concepts like how to use a shower, how to cook, what's a TV, and no, you can't get a job as a mercenary or a fighter in an arena please put that sword down before you get arrested. The story is bright with Azusa's snarky narration, and later, his embarrassed reactions to Ilias's earnest and doting behavior. As someone with a lot of pride, Azusa is tormented by Ilias's chivalric, shoujo-manga-like wooing, but his tsundere personality shows through when he quietly accepts Ilias's affections despite how much he scolds the other man in his head. Their interactions are absolutely adorable as you can see just how much Ilias cherishes Azusa, and how much Azusa cares about Ilias (despite all attempts to appear indifferent). The smut tag on this story exists because the R18 scenes are highly explicit, but even without these scenes, the romantic development between the two characters is very well done. After reading one of the more romantic scenes in chapter 8, I skipped ahead and read the rest of the story through MTL and ended up crying a little on the final chapter. (It's a happy ending.) Overall, if you're a BL fan who likes really fluffy and heartwarming romances, give it a try. If you're not into BL and just want to see what life's like for an otherworlder in Japan, it's safe to read this story up until chapter 5; most of Ilias's 'discovering the world' scenes are in the first four chapters. <<less
54 Likes · Like Permalink | Report

So, I'm not sure why the ratings are so bad right now. Is it because theres only 6 chapters? Is it because people discriminate against yaoi? Is the free translation not good enough? Well, for now at chapter 2 the story is interesting and at least its somewhat unique. The translation is good enough for me. So unless theres some horrible mistake or the story devolves my rating will stay at a 5.
19 Likes · Like Permalink | Report

At the time of this review, I have read the whole thing. It's a very cute slice of life that follows a salaryman and a knight he picked up. It's super relaxing to read and very enjoyable and people should really give the story a try!
13 Likes · Like Permalink | Report

so much fluff; full of 'Awwwww, cute' moments that make you chuckle. There's no melodrama and the MC is an adorable tsundere. I found it a very relaxing and enjoyable read.
6 Likes · Like Permalink | Report

Even though this is a short novel, it certainly doesn't suffer for that reason. The characters are well fleshed out, the setting is fun, the pacing is nicely done, and it's great to read. It is still able to grab hold of your emotions, and to top it all off... the smut is soooo good.
5 Likes · Like Permalink | Report

Dear ars, thanks for the warning, otherwise the 0 to 100 would have been shocking! Lol it's so cute and fluffy, but you're right that Ilias has. No. Chill. XDDD MC is so relatable and cute in his own way too!
4 Likes · Like Permalink | Report

The novel was absolutely adorable! The MC and ML were exactly as the summary described. The MC is a tsundere while the ML is really like a big loyal doggy with a little mischievous side to him. The smut is also really good and explicit so it leaves nothing to the imagination, gotta love all the details~ Overall, I really recommend this novel to any fellow fujoshi out there, this story is definitely worth a read!
3 Likes · Like Permalink | Report

It's a cute, fluffy story. I don't think I'll be changing my rating soon, specially with the upcoming chapter :D
3 Likes · Like Permalink | Report

Lovely story, lovely characters, lovely everything. The translation quality is excellent, and comes with the added bonus of the original author not only being aware of the translation, but being genuinely thrilled that their work has been made available to English-speaking audiences.
2 Likes · Like Permalink | Report

Both the MC and ML is pretty cute. I love how the author phased her work, not that fast and not that slow either. Once the two determined their feelings they did not go wishy washy and instead, held on to it. It's definitely a good break from all the reincarnation novels that I'm reading. If you're after a light read with good smut, I highly recommend this book.
2 Likes · Like Permalink | Report

I really enjoyed this novel. It was full of fluff and cuteness and a tiny bit of sadness before the end. Both MC and ML are adorable. I couldn't help but fall in love with their relationship. I truly recommend this heartwarming gem!
1 Likes · Like Permalink | Report

So much can be felt in this little novel, really. MC is a tsundere but the best kind of tsundere with how he's still willing to express his feelings to ML in a healthy way. ML is an absolute treasure with his sincere affection to MC. The romance between the two isn't much of a slowburn with how short the entire thing is, but the process of them falling in love was so natural and didn't feel forced. The plot did not digress and wasn't overreaching. One of the best elements... more>> for me is
Spoiler

how ML said that in his world love was just love and gender didn't matter more than feelings there.

[collapse]
That was beautiful. Only good things to say for this novel. It's definitely one of my faves and I'm overflowing with emotions for it that I'm blubbering. This is a quaint gem. <<less
1 Likes · Like Permalink | Report

It's short good bl novel that easily can pass as manga. You can imagine all the scenes in manga style. That's how good the translator doing their job! And how the author created such a nice flow with how short this novel.
1 Likes · Like Permalink | Report

Very sweet. The ending is lovely and I'd definitely reread it! Sweet casual couple.
1 Likes · Like Permalink | Report

Since this was a short story, I expected it to be some fluffy cute romance. Sort of like those one-volume manga you read when you have nothing much to do. Well, this novel really delivers. It's really cute and soft, but at the same time will make you sob. I certainly wouldn't call it a masterpiece, but it's a good and fun read.
0 Likes · Like Permalink | Report

I recommend it it is a very cute story but with some fluff in them. But what do you expect from bl. Also I quite the dog like characters, they can be cute but than turn really beastly.
0 Likes · Like Permalink | Report

I would give it 5 ⭐️ It's such a beautiful love story between two individuals from different worlds. I loved it so much that I read it twice. This book is told from Azusa's perspective. The sequel titled Brought my wife back from another world is told from Ilias's perspective. I so highly recommend it. It's a short read and I wished there was more!
0 Likes · Like Permalink | Report

Adorable story, the relationship dynamic was cute and funny. When I read the summary I thought it reminded me of The Knight Before Christmas movie so that's why I started this (too bad the knight didn't have a name like Sir Cole so everyone thinks 'his name is Circle?' lol. The MC is an adorable tsundere and the knight is not like some useless guy from a primitive time, he's a cool and adaptive guy that has a lot of cute sides. It's a short read but I felt that... more>> it was very easy to get into and I quickly got attached to the characters. Also, before I started reading I was worried by "procrastinatorpro's" review about the MC's misogynist view and the 'role of a woman' but I think they must not have read the story properly or they read it with some weird prejudice in mind because there is none of that in the story.
Spoiler

When the knight comes he assumes the daily chores in return for staying at the MC's house, but why is this not viewed as 'taking the role of the woman?' When a salaryman goes to another world and has no skills to utilize and turns to taking care of the house just like his partner did, going even so far as to take a part-time job to keep busy, why is this interpreted as a lack of independence? We also don't see like, any interaction with women so why is it that MC has a lack of disrespect towards woman and only view them for their body? There isn't even a hint of this, there's only like two scenes where the women MC works with are viewed as scary because they're overly strong-willed and a scene at the end where MC describes his new coworker in the new world and she is described with big boobs and a cute face while being super tall while having an overly affectionate personality but no suitors.

[collapse]
Anyways, don't pay attention to unfounded opinions, read this with peace of mind. It's a great story. <<less
0 Likes · Like Permalink | Report

its a cute, feel-good story, worth a one-time read. The interactions between MC and ML are pretty cute and oooh the vinegar-drinking scenes are STEAMYYY~~~ tw//spoilers
... more>>
Spoiler

but what's up with that utter lack of independence of the MC after the end of the main story? And what's up with conforming to the stereotypical role of the 'woman' in a relationship? This dynamic disappoints me so damn much, but I guess I shouldn't have expected something better out of a BL novel but I still hoped for something progressive. Moreover, the MC's view of women in general smacks of disrespect, its only limited to their body.

Fluffy, cute and sweet moments between the two characters with spoonfuls of heart-wrenching moments. Enjoyed reading this and regretted not finding this earlier huuuu. Love the translations!! Sweet-loving story. Recommend to read for all fujoshi!
0 Likes · Like Permalink | Report
1 2 Next »
Leave a Review (Guidelines)
You must be logged in to rate and post a review. Register an account to get started.