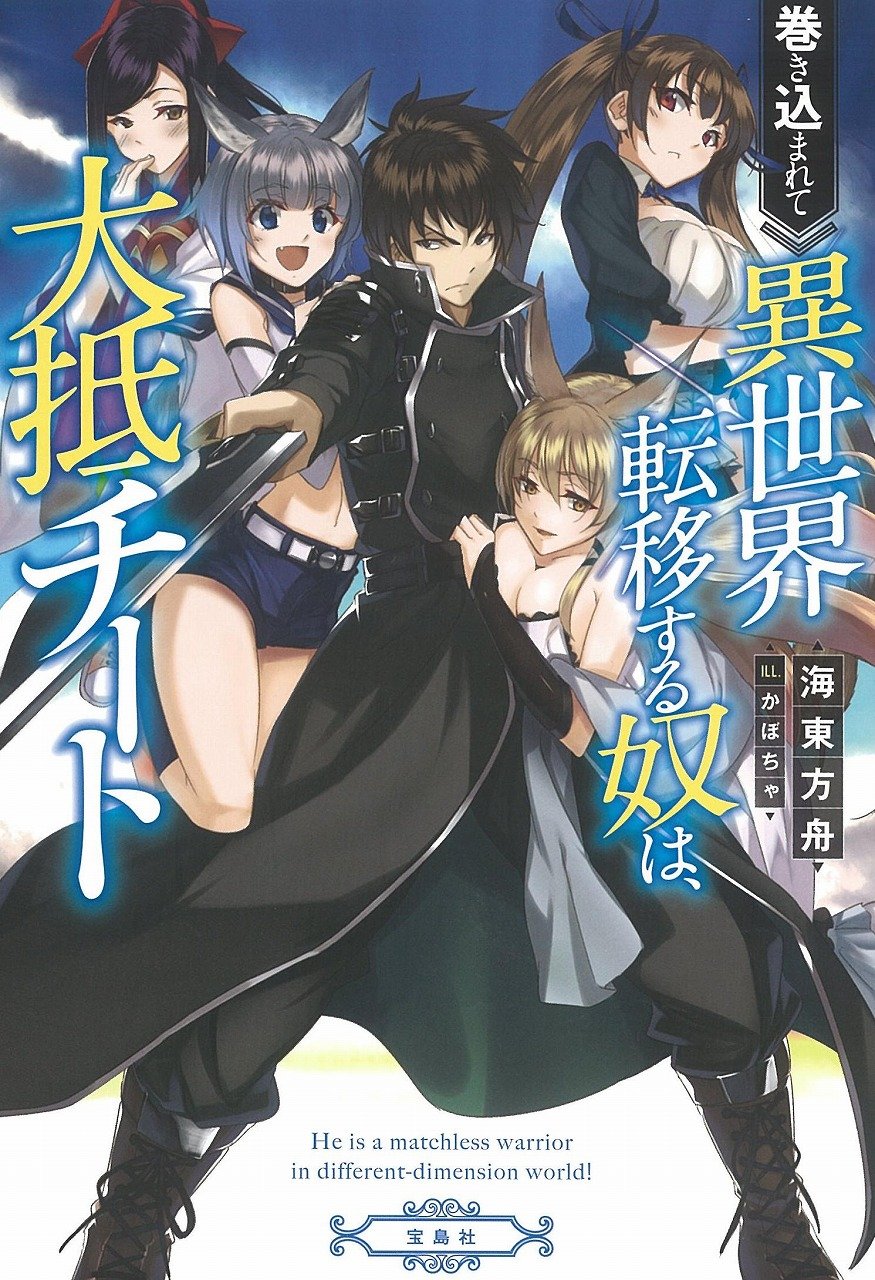 One entry per line
Kabocha
かぼちゃ

One day during lunch break, a male high school student Yuzo Ogata suddenly transferred to another world of sword and magic together with 4 of his friends.

According to the Princess of Space-Time Magician, a foreign world who summoned them, they want them to beat the Demon Lord as Heroes to save this world.

“`―― There should only be four braves though?”

A man who was mistakenly summoned to a different world. What will be in store as to his fate?

These are recommendation lists which contains Makikomarete Isekai Teni suru Yatsu wa. You should give them a visit if you're looking for similar novels to read. Alternatively, you can also create your own list.
More Lists >>>

Ugh. Couldn't make it past 10 chapters. It's basically just a straight post of a MTL, and the grammar is exactly what you'd expect. The poster (NOT translator) basically just says 'deal with it' in the comments when people complain, which they do with almost every chapter. It does not get better. Storywise, the MC is a dick, and the dynamic of the MC's friendships makes no sense either by western or japanese standards. So the interactions of the characters are silly, stilted, and so brainlessly derpish that the... more>> reader can't possibly feel anything for them. This is bad MTL of a poor story written on a cliched outline. <<less
11 Likes · Like Permalink | Report

UPDATE: ~20 Chapters Later (Ch.32) The story is still chugging along somewhat leisurely, our MC is growing his harem bit by bit (and actually being physically intimate with them), and setting up a base of operations, but translations remain MTL-stiff and in need of an editor. One main thing to note is that there hasn't been much of a peep from the PoV of his friends up to this point, and that once again, if you're coming in from the Manga, this is the WN version that has a notable difference... more>> in initial development. I'm tempted to downgrade it to 3-Stars, given how slow the build-up remains to be, but that's probably my bias from being spoiled a bit by the manga version giving a bit more even viewpoints between his side and his friends' sides. For now, I'll keep it at 4-Stars. Will update once again after another 10 or so chapters. --------- I like the story, but it feels a bit stiff and stilted at times. I'm not sure if it's due to the translator or an extremely rough origin source. That said, it's quite readable. It could use an editor to help smooth the flow. One thing to note, for those coming in to read it after reading the manga, is that this is the WN original. Quite a number of story elements have been changed almost from the start, and I suspect that the manga differences were based on whatever changes were made between WN to LN. With that said, the reason I am giving it a solid 4 for now is that it's a bit different from the usual Isekai story. The MC isn't some pathetic pushover with the density of a neutron star, has some actual balls in taking the initiative in intimacy and action, and most importantly, his fellow summoned buddies don't hate his guts or try to push him away when it turns out they have some special abilities and he didn't (yet). At the same time, he isn't blatantly trying to force a change due to his OP'ness, nor is he trying to force typical Japanese ideals on the world. He's adapting to the world and taking the differences in culture in stride. Those things alone already put it well ahead of many other typical Isekai novels, where it takes an act of God for the MC to notice the feelings of those around him, much less act on them, or where the MC is instantly booted from the party after being transferred due to having no skills, or where the OP MC just forces changes or spouts their "this world is EVUL! MUST change the system nao! Down with Slavery! Down with Nobility!" spiel. Whether it becomes 5 stars or 3 depends on the plot and how it progresses. At the time of this review (Ch.11), the MC and his girls have only started their adventure. I will add to, or change, my review after giving it another 20 chapters, since they're all pretty short. <<less
10 Likes · Like Permalink | Report

I can only assume we have a rookie machine translator on our hands here, as evidenced by how jarring it is to read the first chapter and doesn't seem to get any easier. ... more>>
Spoiler

Alright so one can easily assume it's like a certain story that had a word writing, book loving glutton in it. Not so as apparently the MC is friends with and just as popular as the others who were summoned. Heck, his friends as so much would leave with him if they thought he was leaving because he wasn't a hero and not given a good treatment. He also doesn't start with his cheats until after he decides to leap in front of one of his friends to protect them from a spy that threw some teleporting item with no set point. How he gains his cheats? A fricken laptop. WHAT?!? By the fifth chapter, he is now vastly overpowered at level seven and about to enter a slave shop.

[collapse]
I don't know if it's due to the translation, but I can't seem to like it. Maybe when the translation gets better will I get a clear answer. <<less
8 Likes · Like Permalink | Report

Honestly it might be a great story but the translator is worse than Google translate. It reads like this: ... more>>
Spoiler

The guy forces a smile at the remark of such Kyousai after its astonished.

It will be such a thing to not say whether or not. They left this place to escape.

[collapse]
Yep. It's completely to hard to know what's going on for a number of reasons. For one, what about having the right words to describe what's going on? 2, who's talking and who's the actual characters? 3, does the translator actual read what he posts or maybe he's just not actually fluent with English? That could be the case, maybe the translator is still learning or in high school doing translations to make extra $$. In that case, they should use our comments for constructive criticism like most great translators do and improve their translations. Or maybe it is just Google translate reposted... <<less
0 Likes · Like Permalink | Report

It's not bad, its rather average, but it's unspeakably cliche I'm to take a star. At the very least it's alright to read if you like watching his stats enter interstellar space. It doesn't deserve 1 star, but it doesn't deserve a 4 or 5 either, the story is a bit hard to understand, and something is seriously wrong with the MC, I think he hit his head but it's not properly explained. Read this in between things worth reading, and if you dislike any of the tags ignore it.
0 Likes · Like Permalink | Report
Leave a Review (Guidelines)
You must be logged in to rate and post a review. Register an account to get started.