Novel Updates
RegisterLogin
Theme
Search
Your changes has been saved.
Advertisements
Lonely Me and the Lonely Caring Goddess

Home >
Novel >
Lonely Me and the Lonely Caring Goddess 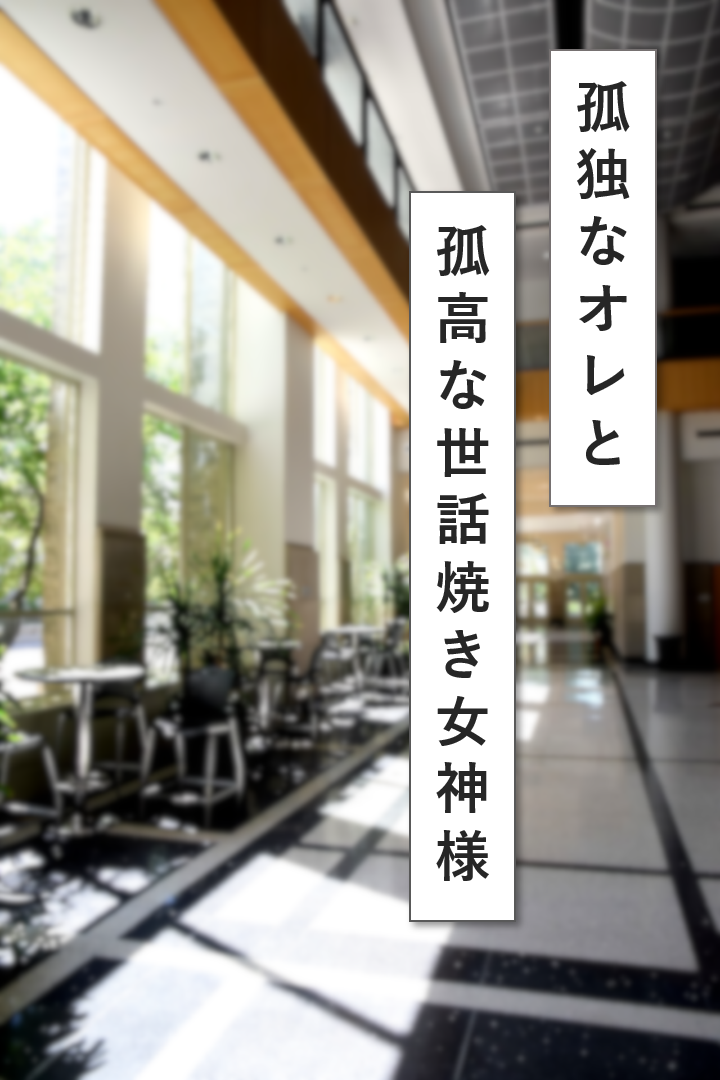 One entry per line
つがん

Status in Country of Origin. One entry per line
324 Chapters (Ongoing)

Wanting to turn over a new leaf after moving…

I thought I could start over and forget my lonely middle school days, but what awaited me there was…

I’ve had enough of these people.

In the end, am I destined to stay lonely…?

Then, one person approached me.

She was the vice-president of the student council, Satsukawa Sara, who was known for her coldness towards others and her overly beautiful appearance, the “Lonely Goddess”.

But I know… her other side.

That she’s so kind, and has a very caring side.

“You’re getting too familiar, aren’t you? You guys… don’t get in the way!”

“From now on, I’ll be taking care of you every day at your house!”

W-Wait! Don’t do that in a public place!

Thus, I became even more isolated…

One entry per line
孤独なオレと孤高な世話焼き女神様

100 Things I Don’t Know About My Senior (1)
How to Keep a Distance from a Beautiful Girl (1)
I, a Lonely Otaku Was Surrounded by Some of the Most Beautiful Girls on Campus and Was Called Riajuu Before I Knew It (1)
Lonely Loser, I’ll Become Blonde Frivolous Gyaru’s Favourite (WN) (1)
Mawaru Gakuen, Senpai to Boku: Simple Life (1)

These are recommendation lists which contains Lonely Me and the Lonely Caring Goddess. You should give them a visit if you're looking for similar novels to read. Alternatively, you can also create your own list.
More Lists >>>

I just gonna leave a review here since there is none. I went ahead and read the raw and to be honest it is by far one of the best slices of life/ romance novel (on par with the Neighbor Angel series). Not only do we have a great amount of diabetes moment but there are also natural conflicts/drama to make the readers squeal and help the plot moves on naturally. Plot 5/5: As I mentioned before, this slice of life novel has plot and story arcs in which the readers... more>> get to discover the inner struggling of each character and the event which happens progressively in real life. I find it satisfying that the story remains consistent and factors which appeared before usually adds up and aid the M. Cs in their problems. Characters 4.5/5: Each character has their unique personalities, and they do reappear frequently. The main couples are two cuties who made many blunders and have many insecurities, but they work their ways to resolves each conflict and honestly, I find it satisfying when characters recognize their mistakes and try to fix and prevent those mistakes from happening again. However, Kazunari, the male lead is too much of a goody two shoes I don't mind his righteousness and his way of doing things but gosh he just let the females get all over him even though he already has Sara, the female lead. Don't get me wrong, he stays loyal to Sara. What makes me lower the score is
Spoiler

Hanako introduced later in the series sees the image of her deceased brother in Kazunari and literally "acts" like a sister by KISSING on Kazunari's cheek MULTIPLE TIMES. You can't justify that action by saying she treats him like a little brother. Hanako and Kazunari is not related by blood and it is not fine to kiss someone else' BOYFRIEND. And worse is that both Sara and Kazunari is lenient because of the "I see him as a brother and not a boyfriend" reason which makes me mad since it means she can do flirty things and get away with it. However, the author managed to redeem the "special" relationship enough to calm my rage.

[collapse]
. There are more couples in the story aside from the main one and personally, I really like seeing the side characters' relationships develop. Overall 4.5/5: This novel is a great read considering I keep reading to know what will transpire after each chapter since the plot/arc is ever-moving. I will give it 5 stars since I recommend people continuing reading through the first 30 or so chapters because they are necessary building-up for the events in the chapters later on.
Spoiler

Yes, some background details in the earlier chapters are actually needed for the arc in the chapters 200 and beyond.

[collapse]
Edit: After reading chapter 250, the author made a clear distinction in Kazunari's relationship with Sara and Hanako. So for now it doesn't leave a that much of a bad taste in my mouth. <<less
9 Likes · Like Permalink | Report

This is pretty good for about 50-80 chapters, but after a certain point the FMC kind of turns into the MCs mom that he also wants to bang. She does literally everything for him, including dressing him. It's just too much, I keep hoping for things to go back to normal but it doesn't seem like it's going to happen. Story turned into too much of a weeb fantasy. MC gets his every need taken care of by the hottest, smartest, most feminine girl in school, who just so happens to... more>> be the best female athlete even though she doesn't play sports. Oh also, she hates all other men who aren't the MC, the MC is fine because she saw him do like two nice things before they met. The author needs to relax. All that said, if you're bored this isn't a bad read. 80 chapters of solid fluff and you can really stop at any point. <<less
5 Likes · Like Permalink | Report

I like this a lot. This and Otonari Tenshi are probably the top in this 'light fluffy romance' genre that can be found here, imo. Of course, this doesn't include the published light novel romcoms that have a bit more realism to them. Compared to Otonari Tenshi, this has more things happening, is a bit more interesting, and a bit more comedic, especially the 'baka couple' moments. Gradual and believable relationship development between the leads, good solid supporting cast and portrayal of the world around the leads, funny reactions to their sickeningly... more>> sweet relationship, interesting obstacles they have to face (but nothing too hard because this is supposed to be light). Worth a read. (^^^yeah Hanako is so unnecessary I don't know what the point of her character is. But there's no ntr feeling there so whatever :/) <<less
5 Likes · Like Permalink | Report

The plot is good, but it's not realistic at all if that's what you're looking for. There are lots of plot conveniences that allow the isolated FL to interact with the MC. It turns out the MC is also isolated but the FL likes the MC's kindheartedness, so they become friends. It's simple, but it works. I like the MC & FL's friends a lot - they stick up for the main characters and help resolve misunderstandings. The way the author uses multiple POVs helps make it easier to see different... more>> people's sides of the story. <<less
2 Likes · Like Permalink | Report

the usual “tragic past where the MC is bullied and gets depression but gets over it by moving over to another school” AND OFCOURSE the fMC also has a mental problem. Can’t say much since ive only read 20 chapters. But tbh for me the way the author writes really lacks feeling. I mean its way too straightforward for me. (I was gonna press 3 stars but I misclicked and it wont let me change it, f*ck this)
2 Likes · Like Permalink | Report

Unrealistic. That's all I could say. If something happens to you traumatic, you don't get over it in a day. The dialogue between the characters also feel off as well. It could be a problem with either the translators or the author themselves but reading how the characters interact doesn't sit well. I was hoping something good from the 4 star rating but I can only feel disappointment with it. My review may be wrong and it could be because I've read only so much but in my defense if... more>> in 20 ch I am not hooked with it, better read something else. <<less
1 Likes · Like Permalink | Report

c39 read so far - Love it so much. It's an ice cold sempai and a kindhearted MC, and the sempai is extremely sweet, caring, and compassionate to only him, while being ice cold to everyone else. I really like it - it's what I wanted out of a work like Oregairu. (Ex always wanted to see Yukino doting on Hachiman, and this series perfectly hits that.) I like the MC a lot - he's very kindhearted, and I like the trope where a character always does something kind anonymously... more>> but someone else (sempai) sees all his actions and gradually falls for someone. I also enjoy the two side friends, and I like the way MC and FMC's relationship developed over time. There was a minor misunderstanding I didn't love, but it was cleared up extremely fast and didn't detract from how much I loved this work and binged it in a single night. Highly recommend. <<less
1 Likes · Like Permalink | Report

This is a soft and beautiful one, worth anyone's time. This one has a solid plot as well as the characters are well fleshed out and it has a somewhat serious vibe, thanks to the trauma that both main characters have experienced. They are both isolated, have a disdain for s*upidity and childishness, and share a lot of commonalities between the two. This common ground, plus the MCs general kindness, opens the door to their relationship and the hijinks that ensue. If you like your romance with a bit of... more>> a serious edge to it, while still remaining fluffy, then this is a good pick. <<less
1 Likes · Like Permalink | Report

This is dangerous to me heart. I recently started reading Romance and Slice Of Life type novels and this has got me hooked! Superb plot and the characters are done superbly well! Am looking forward for more.
0 Likes · Like Permalink | Report
Advertisements
Leave a Review (Guidelines)
You must be logged in to rate and post a review. Register an account to get started.