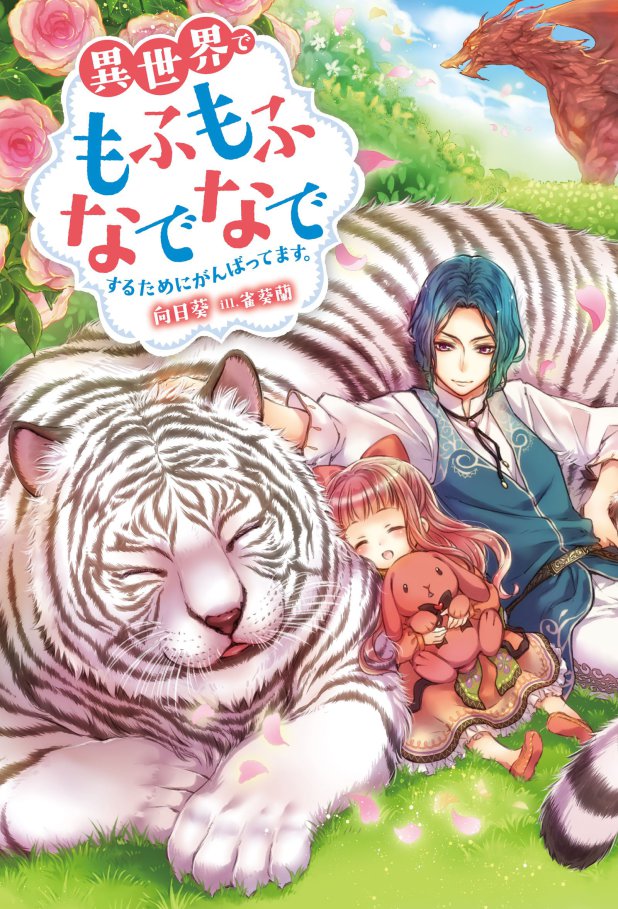 One entry per line
Himawari
向日葵

After various things happened, I got an ability from God and reincarnated to another world! While being watched over by my high-spec family, the super ordinary me fully enjoyed other world life. Using the ability I received from God, I had a daily life of just fluffing and petting fantasy animals. There are some shady movements too, but while being led by the nose by God, I’ll do my best at various things with my cheat-like comrades!

These are recommendation lists which contains Isekai de Mofumofu Nadenade Suru Tame ni Ganbattemasu.. You should give them a visit if you're looking for similar novels to read. Alternatively, you can also create your own list.
More Lists >>>

Well, being the translator of the series, I gotta rate it a 5 haha ? But seriously though, I like this series a lot. The summary explains the story, but I feel like it doesn't go in enough depth... So I will summarize what goes on here! The story follows a cute little toddler girl named Nema. She's been reincarnated by God to decide whether or not to destroy the human race at the new world she's going to. It's because the humans over there are discriminating against the other races, acting... more>> like they're the superior race. Receiving a cheat to be loved by all non-human creatures, she's reincarnated as a baby. Nema doesn't really care about that in the beginning, and is all about fluffing and petting animals. The first 20ish chapters (ages 0-4) basically fall in this period and are all world building and laying the foundation for the plot. Chapters beyond 20 (when she's 5 and up) are when she starts getting more involved with the original purpose of why she was reincarnated to that world. She interacts with the other world's sentinent species and starts getting dragged by the political? undercurrents that have been plaguing the world thus far. (She's still a child at the point I'm at though.) I haven't actually caught up with all the chapters currently released, but I'm working on it. All in all, the story has some solid world building, and the characters are likable. Some chapters are short, other side get really, REALLY long... Plus, there are a lot of cute moments with Nema, and there's petting time with fantasy animals!! I try to keep an encyclopedia for all the new animals/terms, but it's hard to keep up with since there's so much new information in almost every chapter... Give it a try if you're looking for something new to read and judge it yourself. Maybe don't judge the translations (since I know I'm not the greatest OTL) but maybe you'll like it. :3 <<less
51 Likes · Like Permalink | Report

super cute! Not many chapters out yet so can't really rate it but it has a great start. This novel would be enjoyable if you want to read a cute and fluffy slice of life (slow pace) story.
Spoiler

The female MC is reincarnated to be loved by all animals. She gains consciousness as a baby and is currently just a toddler. Being a toddler she speaks with a lisp which is super cute. Most of her thoughts/actions are towards mofumofu animals.

It's wholesome, light-hearted fluffiness. The chapters are quite short so this isn't one you need to spend a lot of time on, making it perfect for the time in-between classes or just a break at work. This review has only been written at 11 chapters where no substantial material is out, but I can see the gist of the story. It's about a soft little girl MC (transmigrated from another world) that gets a power from a God (in an unfortunately non-comical way) to be loved by all animals. So far,... more>> it's heartwarming and the characters we have been introduced only add to the comfy atmosphere. The bottom line is: if you don't like stories without a heavy plot, don't read it. Otherwise, you have nothing to lose by spending some time reading through. <<less
9 Likes · Like Permalink | Report

The story has a few issues down the line: First of all is mood whiplash, as later on it switches between the MC fluffy-time bubble and the ugly world she doesn't get to see due to being protected. As part of the mood whiplash, there is a part of the story where it looks like she'll pull a Rimuru Tempest and make a forest village for the good goblins and other monsters she finds, but ends up going straight to treating them like livestock and adventurer targets, which was odd. When the plan eventually gets implemented it turns out a lot better as various people point out the needless cruelty, but that makes it all the more odd as it's the fluffy MC's project. It works out in the end, but the story spends a long stretch of time on the troublesome planning phase, including several chapters researching castration, so beware of that arc-long mood swing.

Also, at around chapter 75 I was prepared for her to go full on fluffy loli demon queen, but sadly the MC remained in her bubble mofu~mofu~ing everything that isn't a person. It might have been an amazing story if she had actually taken some action.

Worldbuilding has some interesting points, but ultimately amounts to any s*upidity in the world design being the Creator God's fault.

I realize this is a review of 16 chapters, but that is all that is posted so far and I don't want it dropped!!! I love reading books like this one because they are so mentally relaxing, gives you giggles and makes you smile. To me, its hard to write a book like this because you are creating a desired atmosphere/feeling (slice of life) while still trying to be original and interesting. The chapters I have read so far accomplished it all. My first thought, after reading the last posted... more>> chapter, was I could read hundreds of pages like these. It was like mental medicine so I hope it continues posting and as quickly as possible! <<less
6 Likes · Like Permalink | Report

Love it. Not too slow. There's still develepment. It's kinda same with Nigotta Hitomi no Lilliane.... more>> But that one is really a Very slow pace novel. The whole story as I read the recent chapter it only talks about the mission to "mofumofu" to touch, to make them feel good her beast personal maids. By concentrating magic in her hands. Just making them wet.. Really. Back to this novel. I really found it very entertaining. There's more event. Within 17 chapters.. Its not rush for me simply because the translators give more details a long one chapter. And I like the interactions of all different animals.... Any ways, there's still more chapters to be waited. Now a stalker hehehehe... <<less
5 Likes · Like Permalink | Report

Wow, this series is amazingly fluffy! I love it to death! But there’s only one problem right now, and that’s the translators speed of translation. Their work is great, and the author’s content is amazing, but I need my fix! I can’t keep waiting months on end for chapters! I’ll be an old man by the time the translator catches up to the current releases. But other than that, I love this novel. It’s got a few quirky bits, and it’s low chapter count hurts my enjoyment just a smidge, but... more>> other than that it’s great. Go read it for a quick and fluffy read! <<less
2 Likes · Like Permalink | Report
Advertisements
Leave a Review (Guidelines)
You must be logged in to rate and post a review. Register an account to get started.

There is definitely something wrong with...