Novel Updates
RegisterLogin
Theme
Search
Your changes has been saved.
Advertisements
Woof Woof Story ~I Said I Wanted To Be A Rich Person’s Dog, Not A Fenrir!~

Home >
Novel >
Woof Woof Story ~I Said I Wanted To Be A Rich Person’s Dog, Not A Fenrir!~ 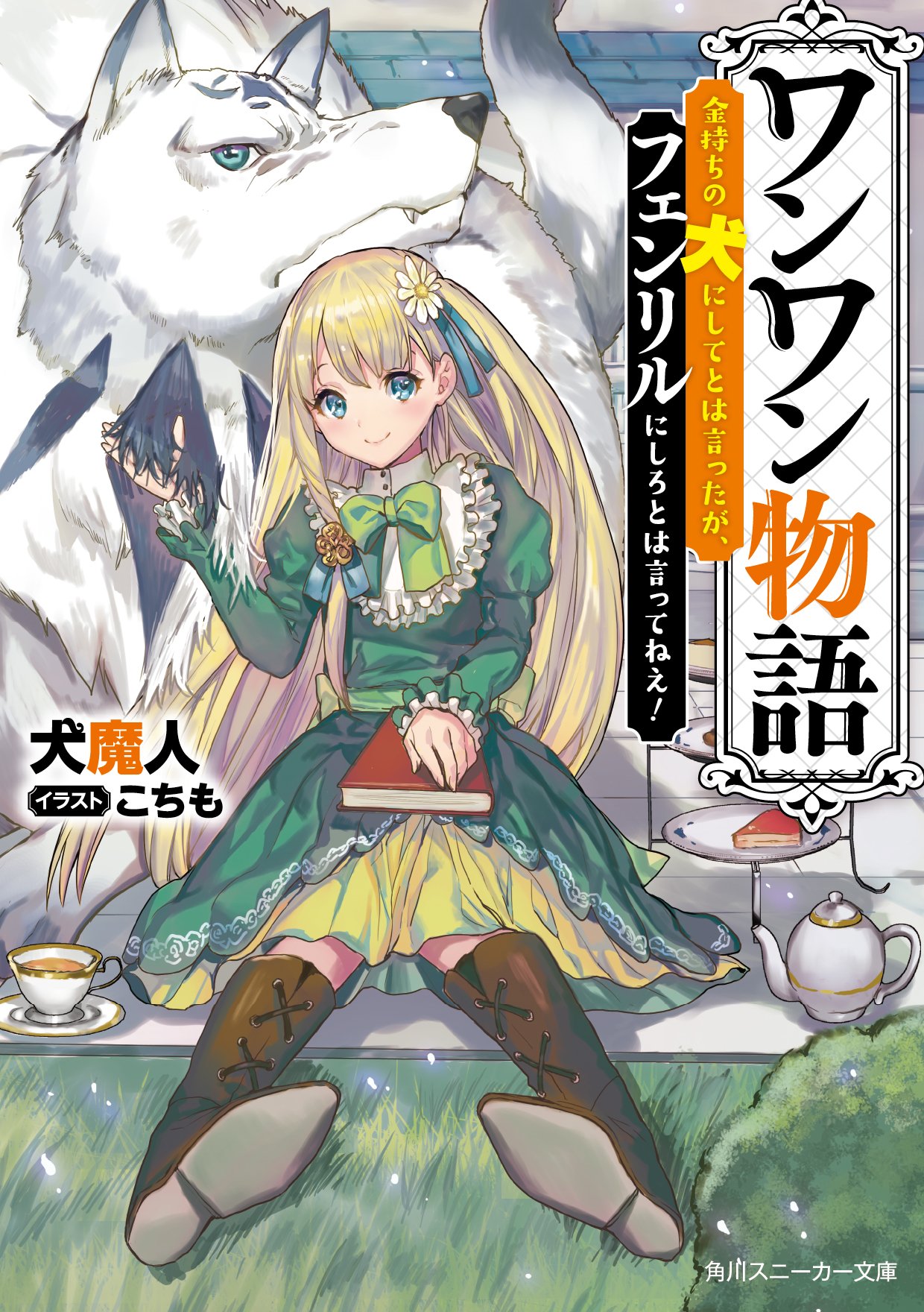 「If I get reincarnated, I want to be the dog of a rich household. Not having to work and having my meals handed out to me while I just sleep would be the best, wouldn’t it?」

Those are the thoughts of Oogami Routa, a corporate s*ave who died from working too much.

「I shall grant your wish!! (I’ll also give you something special as an extra!)」

Because of an enthusiastic rookie goddess, Routa truly became a rich person’s dog. He spent everyday being loved by his owner and living a pet’s life.

「Wait, aren’t I too big for a dog? Huge fangs and a scary face, doesn’t this look more like a wolf!?」

Afraid of getting exterminated for being a dangerous animal, Routa did his best to act like a cute dog.

What Routa didn’t know was that he was no ordinary wolf, but the demon wolf king himself, Fenrir!

One entry per line
Wanwan Monogatari ~ Kanemochi no Inu ni Shite to wa Itta ga, Fenrir ni Shiro to wa Ittenee! ~
Woof Woof Story: I Told You to Turn Me Into a Pampered Pooch, Not Fenrir!
ワンワン物語 ～ 金持ちの犬にしてとは言ったが、フェンリルにしろとは言ってねえ！ ～

These are recommendation lists which contains Woof Woof Story ~I Said I Wanted To Be A Rich Person’s Dog, Not A Fenrir!~. You should give them a visit if you're looking for similar novels to read. Alternatively, you can also create your own list.
More Lists >>>

Well, what can I say. I freaking loved this novel as of chapter 8. Really cute and fluffy, it's also amusing. He reincarnates into a pet dog (super strong demon fenrir) and can fire beams when barking too loudly/excitedly (we're not really clear on if the volume of the barking or the intentions of attacking something affects it). He looks like some kind of a demon wolf, yet everyone but a single swordswoman acts as if it's nothing out of the ordinary or bad, he acts like a harmless pet... more>> after all. Well, I can't say there's a lot of plot and there's nothing serious going on, but that's what I read this for, the comedy and fluffy feelings, I kept on smiling. If there's something I'm sad about, it's just that there's only 8 chapters translated as of this moment. I really wish there was more, but what can you expect when the translation started less than a month ago. Give it a shot, it's a great way to pass the time... Sigh, now I have to find something else to read, it gets harder to find favorites the more of them you read... Edit: Read some more now and it has still got that same mood, it's great. By chapter 27, we now also have the addition of
Spoiler

a super dragon wife, a homunculus mistress in the shape of a cat and a wolf princess (the wolf showed up earlier but we didn't know its gender)

[collapse]
which is pretty cool. The MC and the first two causes mischief like stealing food and wine etc. It got a bit more lively. Too bad there aren't more chapters translated, haha. But, yeah, don't read this if you want some action or drama, it's just about creating a nice mood and some light jokes that does make me laugh sometimes. Edit 2: Up to chapter 48 read, still the same mood as before. A s*upid but cute group of animals having fun and being OP and the MC just wanting to be a "neet" pet no matter what. Nothing much happening, of course. Still, it's a fun and light-hearted read. Just once did I get a bit fed up with how s*upid they were acting during a certain incident, but it quickly got back to normal after that and it was worth it because the punchline was quite hilarious. We also got to know that the power of the beam is affected by volume and the length he uses it for, it's also supposedly some kind of ultimate destruction magic.
Spoiler

Recently got a new set of characters like an amnesiac undead mare (a flaming phantom horse) now disguised as a normal mare and a pair of horses that acts like an old couple along with the initial contact with some demon lord general of old and the hinted future unsealing of the demon lord and company, but clearly keeps a very light-hearted mood and they're just there to add to the comedy by being comedically dealt with. Routa also keeps on growing bigger day by day. By the way, the dragon morphed into a humanoid loli which she thought was routa's preference. She doesn't really use it often though, only once thus far in a hot spring.

[collapse]
Going to read the official translation of the LN, heard there were some changes to the story and added characters. Here's to hoping that they didn't go and over-localize it to pander to people with no experience with anime, manga or novels. Gotta hate that. Took a peek and it seems that they changed some names, like ren to len, which just sounds wrong, sigh. By the way, chapter 48=About halfway into chapter 5 of volume 3. 1 chapter and an epilogue more after that. Should be a fair amount of new content though. <<less
27 Likes · Like Permalink | Report

I wasn't aware this was being translated, so I read the raws to chapter 20 or so. A cute story, but somewhat repetitive as it continues. It is also similar to several other stories I have read, so it didn't leave a deep impression on me. It's pretty much as described in the summary.
9 Likes · Like Permalink | Report

This review is based on the ln version v1. It's a fluffy comedy SoL novel. The fluff and SoL are fine. But since it is a SoL don't expect a lot happening. The comedy is mainly in expressed with rediculous actions and retorts. I don't think that they are that funny, but maybe that's just my taste. The main thing that I dislike the because it has a comedic setting that everyone acts a little bit dumb. Which is honestly a bit weird given the background setting of certain characters. It feels a... more>> bit forced. <<less
5 Likes · Like Permalink | Report

Its an adorable story and I like it, yes it may be a little generic when it comes to the background with reincarnation and all that but it has a lot of potential I can already think of many paths this story can take and I cant wait to see what path the author will take.
4 Likes · Like Permalink | Report

MC who finds out he is not the normal dog he wished to be, but a super op wolf from legends! This is a bit of fluff This is a bit of cute This also feels like it's going nowhere fast last chapters TLed don't feel like they are staying in the cute fluff area so I'm really not sure whats going on after the end of the TLed chapters will we still has fluff or something else?
3 Likes · Like Permalink | Report

Cute with fluff it is a good story to read you wont regret it. It might not be intense but it doesn't need to be because mofufu.
2 Likes · Like Permalink | Report

Sooo fluffy Its a casual read honestly and its very carefree Currently we have a:
1 Likes · Like Permalink | Report

A truly good novel worth every moment of my time. A paradise of mostly light-hearted fluff, with enough seriousness to make sense. I went so far as reading up to the last translated chapter and even the last available chapter on syosetu in a single weekend.... more>> I'm truly taken. Edit: As of writing this my mind was muddled by the fluffyness of this story. Thinking cleary I would like to rate it 3, 5-4/5 stars, because of one major con of this story: In the beginning on this story that Zenovia girl is clearly hostile to the MC, because he isn't a dog and looks like a wolf. (Revealed in chapter 1) Even though he didn't do anything aggressive, she attempts to kill him several times. That in itself does make sense, as she wants to remove possible threats. What annoysme however is: I think the author tried to develop some serious plot and then got lazy. Advice: Disable your brain reading this. <<less
1 Likes · Like Permalink | Report

Cute story, the main character is really quite desperate to believe that he's a dog and convincing everyone around him too. He just wants to eat food and relax. It's pretty refreshing that the way he thinks is like a loyal dog too and not some pervy guy. Not a while lot of plot at this point but it's fun and entertaining
1 Likes · Like Permalink | Report

Its simple and light light novel. Nothing to convoluted, easy to understand plot, story progression is straight. Its the kind of novel you can read forget about it for sometime and read it again without making you confused. It is reccomended read for its simplicity. When in doubt and wondering what to read while waiting for your favourite novel this kind of novel is a good filler.
0 Likes · Like Permalink | Report

Cute story about a overpowered dog (actually a Wolf demon King) and her master.
0 Likes · Like Permalink | Report
Advertisements
Leave a Review (Guidelines)
You must be logged in to rate and post a review. Register an account to get started.