Novel Updates
RegisterLogin
Theme
Search
Your changes has been saved.
Advertisements
I Became a Sick Nobleman 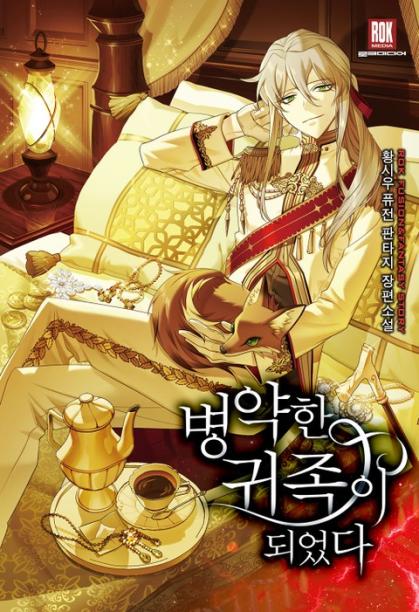 One entry per line
황시우

Status in Country of Origin. One entry per line
209 chapters / 10 Books (Completed)

One entry per line
Rok Media

I became a miserably weak aristocrat in the web novel ‘SSS-Class Knight’.

With a body that can drop at a moment’s notice, no less.

I have to survive, even without knowing the ending.

These are recommendation lists which contains I Became a Sick Nobleman. You should give them a visit if you're looking for similar novels to read. Alternatively, you can also create your own list.
More Lists >>>

Talk about unoriginal. Basically most of the plot details and settings are copied from tr*sh of the Count Family. I love that novel and I think that's the most brilliant piece of work I've ever found on NU, and this one just basically copied most of the intricate details from TCF. I love the translation team, but this copycat novel is just not for me.
2 Likes · Like Permalink | Report

First thing, english is not my first language, and I only read the translation provided in NU It's good. The plot is interesting, when people expect fast power up MC but this one picture the struggle the MC have to pass (though I can understand if in the future MC power up faster). What I really like is how humane the MC is. ... more>>
Spoiler

there's this chapter where he have to 'clean' his mansion/palace (?) from people this one organization that sell drugs slip in his family to monitor them. From maid to knight almost none of them work there because of his family. So he killed those people and he's crying after it. The way he cried because the guilty that he had killed them by basically saying a few words just hit me with how realistic his emotion is pictured. Because you know he's a transmigrated soul and had never kill people

[collapse]
It's my first time reading story with MC like this. Though sadly (for me) the translation is a struggle to read, there's POV change that I don't know if it's the translation fault or it's already like that from RAW. <<less
2 Likes · Like Permalink | Report

Basically a poorer attempt of someone who was likely a big fan of the tr*sh of the count family novel and wanted to make their own. Can't really suggest unless u r big fan of that book too and need something else
11 Likes · Like Permalink | Report

It's actually pretty good. The translation is also pretty good. What surprised me is that he's actually VERY sick and almost dying. I thought original body's sickness will cure after he transmigrates and being sickly was just his reputation. Thank God it's not. And his first power up didn't cure his disease. Since his disease is unknown, it's probably gonna be a long journey to cure it completely so I'm looking forward to that.
9 Likes · Like Permalink | Report

3 chapters in, looks promising. TL isn't perfect but it's decent. Premise doesn't look massively original but it's in the early stages so of course it looks like that. Not much else to say this early on but it's worth the read so far. Nothing really negative to say. I'm looking forward to future chapters.
6 Likes · Like Permalink | Report

Wow, his personality is like cale's from the tr*sh of the count's family. I need more chapters!!!!!!! Who has raw links in this novel?
4 Likes · Like Permalink | Report

Got a butler who is the head of assassin guild or sth in chapter 2 by saying he'll give him the sword he want (yep butler, assassin, similar to Ron).
Got one of the powers left by the heroes from a tree in his backyard in chapter 3. The butler cut it for him. Pass the 'trial' easily and walla he got the power. (If you read TCF the tree idea is same as where Cale got his Indestructible Shield and the power itself is similar to Vitality of the Heart)

[collapse]
Well he's sick so can't expect much. Also I'm sorry as I can't help but compare it to TCF It's not bad tho so do give it a try if you're bored <<less
3 Likes · Like Permalink | Report

So far, I love this novel. The MC is smart and likeable. I don't see any female character yet but I'm fine with a none romance story.
2 Likes · Like Permalink | Report

Pretty good so far! I hope it focuses on the world building and lore of the kingdom. It would be fun to read the main character interacting with other nobles.
2 Likes · Like Permalink | Report

I really like this novel so far! Ruel and Cassion have a very interesting dynamic and the plot is keeping me intrigued so far, even if it’s a bit slow paced.
2 Likes · Like Permalink | Report

Hmm this seems quiet interesting😁 his sick body is sure quiet sickly, I wonder how old Ruel is..... and when the fox is making it's debut.... Ganel really seems the protagonists of a 'everything's my business' according to Ruel but I am feeling that he is not completely pure tho
1 Likes · Like Permalink | Report
Leave a Review (Guidelines)
You must be logged in to rate and post a review. Register an account to get started.