Novel Updates
RegisterLogin
Theme
Search
Your changes has been saved.
For You In The Cage

Home >
Novel >
For You In The Cage 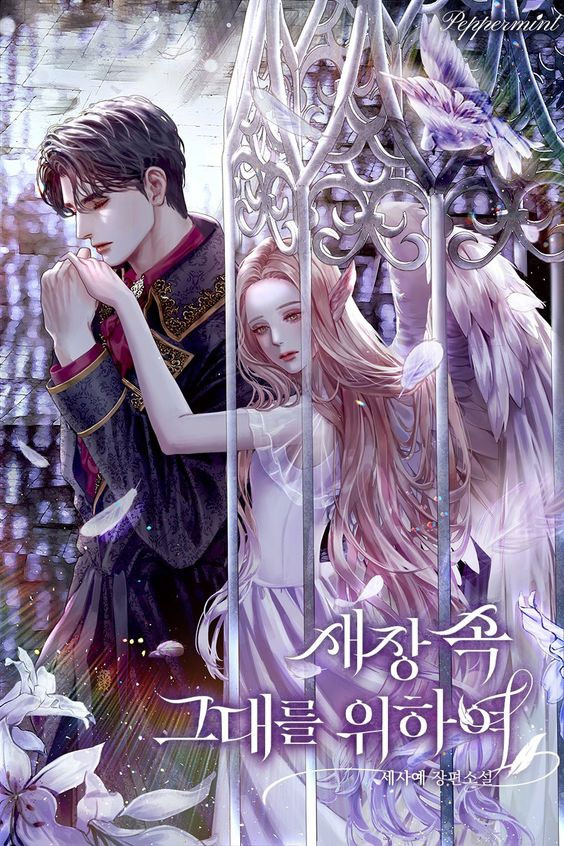 One entry per line
세사예

One entry per line
정연

Status in Country of Origin. One entry per line
127 Chapters + 4 Special Side Stories (Completed)

One entry per line
Naver
Peppermint

Canaren, a beautiful woman with golden wings caught by a tyrant.

A man appeared in front of her while she was trapped in a cage and being harassed by a tyrant.

Purple eyes that seemed to capture the night sky and a deep yet calming voice to listen to.

The elegant man who looked very handsome, with cool eyes and yet blunt expressions, is the tyrant’s twin brother. He is the Duke of Rubius.

The duke had saved her several times from the emperor’s dirty desires.

Tamed by the faint tenderness he showed, Canaren thought of him as a savior. But at some point, he began to show his true colors that he had been hiding.

“Don’t think about running away from me.”

He had made an incomprehensible proposal.

“She is dead. I killed her. And you look like her.”

The corners of Yulif’s mouth twisted. She felt her feet collapse in the despair lurking beneath that dragged her down.

“I don’t need your heart. Just live as my wife for three months.”

These are recommendation lists which contains For You In The Cage. You should give them a visit if you're looking for similar novels to read. Alternatively, you can also create your own list.
More Lists >>>

In spite of what I first thought, the summary is not misleading. ML comes across as a perfectly well adjusted and likable character for the first 3 volumes, but in the 4th volume ML's true intentions are revealed. He is obsessed with FL, to the extent that he completely disregards her feelings and keeps her trapped with him even though he knows she wants to go home to her family. She's miserable, but he doesn't care as long as she's by his side. He's not cruel to her, which makes... more>> him better than the emperor only by comparison. But just like the emperor, he treats FL like a toy that can just be owned and moved around however he pleases. And the s*upidest and most frustrating part is that he didn't even need to do any of this. ML already knew that FL fell in love with him before he turned back time to save her, so why the hell didn't he just approach her and flirt with her like a normal human being the second time?? There was literally zero need to keep her trapped by his side. If he was just honest and told her he loved her, she would want to stay by his side anyways. I've dropped the novel because I'm fed up with selfish A-hole MLs like him. I want FL to escape from both the emperor and ML, but I can already tell that the novel will probably end with FL forgiving ML for no reason whatsoever and falling in love with her own captor. <<less
0 Likes · Like Permalink | Report

*Review was updated after briefly reading everything except for the new special side stories that were just released in August 2022* An early review from me, the proofreader of this novel - because with each passing chapter, I feel more and more irritated with the summary. Yulif (the ML, the duke) isn't obsessive/cruel like how the summary portrayed him to be??!! Those were seriously badly-picked lines... The prologue pretty much reveals how he turned time back to save her ^^ and with every chapter, we gain more insight into... more>> the extent he will go to make sure she survives and attains real freedom (he goes a 'one step forward two steps backwards' at times though). I'm a little sad that the perspective wasn't majorly the ML's like in my first impression (now it's pretty even between the ML and FL), but it's definitely for the better.
Spoiler

"Not communicating and hence misunderstandings" is the name of the game but how does one even begin to explain the previous timeline to someone who has no inkling of that time?

Yulif, the ML, is cold and aloof - not because he's being an ass but because he's focused on his goal. Could've definitely packaged his words a little better though... He knows he is going to die early, and that's why he doesn't want to reveal everything to Canaren or to get really close to her as he knows she will be heartbroken and guilty.

Canaren, the FL, may seem ignorant and unappreciative at times - but how trusting can she be towards the imperial people after they captured her and use her for their entertainment? Totally understandable that it'll only take 1 incident to destroy any trust built.

[collapse]
I'll be marking the wet dream/snu chapters so that people who don't want to read those can avoid it. <<less
18 Likes · Like Permalink | Report
Leave a Review (Guidelines)
You must be logged in to rate and post a review. Register an account to get started.

A Sojourn of a Transmigrated Housewife...