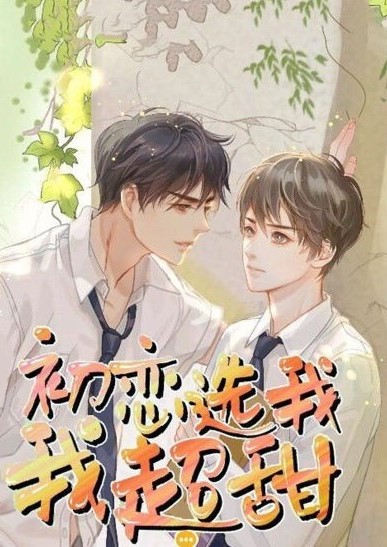 Status in Country of Origin. One entry per line
60 Chapter (Completed)

Ding Xuerun, a good student with both moral and academic excellence, had a wound on his face on the day he transferred to school. Lou Cheng thought he was being pretentious and repeatedly provoked him, “Don’t pretend to be a good student, what homework will you do?” It was not until after the monthly exam that Lou Cheng found out that he really was an excellent student, the first in his grade.

After playing basketball, he showed off and pressed his drenched jersey onto his clean deskmate, “Do you know what is meant by virtue, intelligence, physical fitness and aesthetic sense*? It’s no use getting good grades. Smell it. This is called the smell of a man. “

Then one day, the teaching building’s lighting tripped, and the whole class cheered in the dark. No one noticed that in the back row of the most corner, Lou Cheng pressed his little deskmate against the wall and kissed him.

Lou Cheng: Puppy love is so sweet and scheming.

The two-good students will be attacked by X sorrows when they disagree with each other.

My Underachieving Seatmate Doesn’t Need Any Comforting (2)
Reborn with an Old Enemy on the Day of our Marriage (1)
Do You Remember My Name? (1)
A Certain Someone (1)
I’ll Have My Seatmate Beat You (1)
Lovely Allergen (1)

These are recommendation lists which contains First Love Choose Me, I’m Super Sweet. You should give them a visit if you're looking for similar novels to read. Alternatively, you can also create your own list.
More Lists >>>

I found this novel by chance, and I decided to read it despite the low rating. I was the first reviewer and I just wanna say that this is a very simple bl novel. It just abt two high school falling in love. There's no drama or angst. I was act curious as to why there is many people that vote 1 star. This novel is not that bad for them to rate it so low. But... The ending... It just ended abruptly so that might be one of the... more>> reason. It's a cute novel nonetheless if you ignore the ending. <<less
25 Likes · Like Permalink | Report

Definitely worth a read. ... more>>
Spoiler

this story does contain a very mild form of self harm. MC often harms himself by burning his skin with cigarettes to make himself think that he is defective.

[collapse]
Bad/neutral points/suggestions. The story is really light. Helps in filtering and controlling the mood specially after reading a story which consumes a lot of mental energy. To me the best point about the book was MC and ml. There interactions are fun and cute to read so much that I could ignore plot holes here and there.
just Hope everyone reads the book before judging it. <<less

Fluff and love!! Their journey from friends to lovers is the most enjoyable part as it takes 70% of the story. MC is a genius and all his achievements are from real life events, he is cunning, once he laid his eyes on ML, he led him to the way and seduced him from time to time with little tricks. Here seducing is just some little tricks. MC likes ML from the start. ML falls for MC early but he didn't realize it immediately, so MC waited for him patiently to let him... more>> discover by himself. They are cute together ML is like a golden retriever while MC is tolerant. <<less
5 Likes · Like Permalink | Report

The translation is not so good and I almost gave up on reading but all the rave comments here encouraged me to continue and I am glad I did, thank you fellow readers :)
It's a simple school danmei so, despite some translation troubles, it is still comprehensible.
The majority of the novel is about their daily lives and interactions and how they fell in love. MC Runrun, as the great genius that he is, already knew about his feelings from the start and goes about trying to smartly... more>> and gently seduce ML Lou Cheng, who is definitely the spoiled puppy gong type :) <<less

This story isn't flawless but I gave it 5 stars because I really liked MC and ML. I loved that story emphasized being top student doesn't mean being perfect or being slacker doesn't mean that person is also bad. I loved dynamics between MC and ML I loved how they accepted each other despite their flaws. I especially liked how MC pursued ML. Novel is really sweet there isn't any angst and is good read.
1 Likes · Like Permalink | Report

Plot:: MC got transferred over to ML's school. ML saw the bruises on MC's face and also saw him smoking in the bathroom so ML thought MC was a bad kid with low level grade. However, truth was MC was really super smart and got good grades. As they continued getting to know each other, they both fell in love. Nothing much, just a simple high school strangers to friends to lovers story.
1 Likes · Like Permalink | Report

This is the types of novel I would read without getting boring. I love every piece of it. Though, their future was little abrupt to end and I need more. It seemed rush in the end, but still kind of sufficed. I wish it was more elaborated and showed cute extras.
1 Likes · Like Permalink | Report

The MC is really cute and the ML as well, baby shou x puppy gong couple! The story is fluffy, lighthearted, and heartwarming. As the title saying, choose this novel if you want a short and fluffy read!
1 Likes · Like Permalink | Report

This novel is at most a 3.5. It's not bad but it's also not good. Very average story line (almost bland) with an abrupt ending. In fact, I didn't even realise when the main story ended and when I was already started reading the extras. Aside from that, throughout the story, it felt like I was reading an essay rather than a novel. Any potential intrigue or interesting factors were quickly explained away as if the author was afraid that the leads would fight. Instead of witnessing eventful things in... more>> a story, it felt like I was standing right there, as the hours dragged by, day after boring day. I didn't write much below but there's not much to the story so I placed it in a spoiler bracket anyway:
Spoiler

There are basically no obstacles between the two of them getting together. The sweaty male lead was super annoying at the start (especially when he was all up in mc's business without getting to know each other first) but he later grew on me and became the typical athletic, handsome, rich and dumb puppy-like gong. The MC also has the smarts to win first place at all the exams and competitions while at the same time teaching the ML junior level education (they're in the same class thanks to ml's loaded parents). The whole story can be boiled down to one line: Sweaty, hygiene obsessed (due to sweat), rich and handsome jock gets with financially independent, study god who smokes. Even this sounds more interesting than what it was.

[collapse]
Honestly, this story had zero impact on me. I felt the same before reading it as I did after. While it's not the worst novel I've ever read, it has to be up there on the most boring. If you want to give it a try after reading the rating and other reviews, my suggestion is to find a quiet place with zero distractions or you'll find that, as is my experience, a novel that's meant to take you a couple of hours to finish takes you three days as you keep putting it down to do something else and forgetting you were reading it. <<less
0 Likes · Like Permalink | Report

Very Sweet. If you love fluff there is so much fluffiness in this one. Very cute love story between the two. The novel does seem a bit rushed and probably could have been a lot longer but overall I'd recommend to anyone who likes a sweet BL story with a HE.
0 Likes · Like Permalink | Report

I am not usually writing reviews but this one is an exception. I binged read the whole story for a night! Very cute story, both the MC and ML’s interactions are so fluff inducing. Would have definitely preferred for a longer extra stories but still it ended well. Thank you to the translator for an awesome job!
0 Likes · Like Permalink | Report

Cute, short, and sweet. Loved the relationship between the MC and ML. I also enjoyed the backstory of the MC. Would have enjoyed it even more if there were more chapters but the ending is decent enough.
0 Likes · Like Permalink | Report

a super cute highschool lover story. Very cringy and cheesy but in a funny and cute way. I absolutely enjoyed the read and would love to read similar type novels. Classmate to friends to lovers omg. Adorable but also shares real life problems and serious topics. Overall a good read. :)
0 Likes · Like Permalink | Report

I picked this up on a whim and its not even on my reading list but im pleasantly surprised. This novel is just a silly novel. ML is silly but MC is smart, IQ and EQ. I like how ML falls into MC as most novel makes it that the MLs easily make the MCs dance on their palm, this one is different. It's dumb and funny, the plot is not that much but the enjoyment is 5/5. Although it fell short around the part where they got together, but its still... more>> okay. Translation is not the best but readable. <<less
0 Likes · Like Permalink | Report

A short, light sweet school life romance with small misunderstanding, but the ML is sweet and the MC is sincere. The side characters a little bit funny and colorful but this story focuses only on the main couple.
0 Likes · Like Permalink | Report
Advertisements
Leave a Review (Guidelines)
You must be logged in to rate and post a review. Register an account to get started.