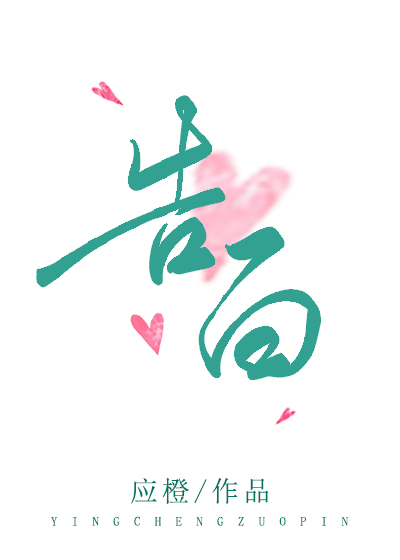 One entry per line
应橙

Status in Country of Origin. One entry per line
97 Chapters (Completed)

In college, Zhou Jingze and Xu Sui were very different from each other— their paths would never cross.

One was a free spirit, a moon surrounded by a myriad of stars. The other was a well-behaved and quiet girl, easy to be ignored.

At a party, Xu Sui was drunk and summoned up the courage to confess to him.

Zhou Jingze froze for a moment, then raised the corners of his lips and said casually: “I’m sorry, you are too well-behaved and quiet.”

They met again, countless times, whether it was intentionally or unintentionally. Xu Sui should have pushed down her thoughts and kept a distance from him.

Yet, he kept pressing, leaving her nowhere to hide. Finally, Xu Sui was against a wall: “Why me?” Zhou Jingze lowered his head and whispered to her: “There is no why; I used to be blind.”

One entry per line
告白

These are recommendation lists which contains Confession (Ying Cheng). You should give them a visit if you're looking for similar novels to read. Alternatively, you can also create your own list.
More Lists >>>

I'm actually a little... Disappointed in this. I was really really hooked in the beginning, I have a soft spot for female leads who have really cute crushes, and male leads who are seemingly carefree but actually really nice on the inside. And this novel really knows how to make these characters come to life.

Xu Sui in love is so cute, and Zhou Jingze is so charismatic. I love the writing! I love the angst!

Seriously, Jingze. STOP SLAMMING HER INTO STUFF!! Bang! And she's pressed against a door. Another Bang! And he pushes her against a table. I won't even count the wrist grabbing, ok?

I want to like you, but my goodness... You can't be mad at her for trying to date WHEN YOU 2 HAVE BROKEN UP.

That is one of several reasons I honestly couldn't bring myself to fully like Zhou Jingze. Another reason might be because I really sympathize with Xu Sui, she had a crush for a ridiculous number of years and when they started the relationship, she was like 200% in, while he was only 170% in. The whole romantic point of the novel is for the male lead to be at 200% too. But I don't think it really reaches that balance, it's more like the female lead, 220%, and the male lead, 200%.

And for a spoiler within a spoiler:

I really was shocked by the ending. So Xu Sui is a doctor and does really well for herself at a hospital she's used to, with pretty decent co-workers around. Basically, she's built a pretty great life for herself.

Now, in the book, they bring some sort of high handed justification, like she wants to see the good in humanity, but hey. Seriously. If Jingze didn't join the rescue forces, and just stayed a regular pilot, would she really join the forces?

I love when characters find their true purposes and it's great if it happens to be saving people's lives, but this. This.

It hurts me because I feel like it made Xu Sui go from a strong independent woman who holds her own to just a wife who follows her husband around.

I think I really underestimated how much Xu Sui and this book, by derivation, revolves around Zhou Jingze. In a very unusual way that I have rarely felt, I really think... Jingze isn't actually good for her. He covers up her mistakes instead of actually letting her grow. The feeling I get from her is... She's so dependent on him... She's desperate for his love... And Jingze knows this, he uses it and has abused it. Sure, he loves her back and he makes amends. But for his own reasons, he fosters her dependence on him. She never really finds herself or becomes a strong confident person... She just finds him and falls in love.

Their relationship... Is not something I would want for myself tbh...

The 4 stars are for the wonderful writing and build up, as well as the side characters. Sixi, be happy!!!

Overall, it's an engaging story with the perfect build up, and a somewhat disappointing resolution.

All this of course is just my opinion, and I think many would enjoy the novel a lot. It's pretty subjective and depends on personal taste.

I binged through this and unfortunately haven’t been able to remember a lot. This story is a mix of ‘’Unrequited Love’’ and ‘Ruochun and Jingming’’ which is why I might have liked it a lot more than I thought. Their story was quite cute when they were in college. Xu Sui’s stubbornness dragged the story longer, and it never made sense to me why she refused him so much when the poor guy was overflowing with love for her. It did frustrate me. At some point, every time she rejected the poor... more>> ML, I was hurting twice as hard for the ML. His personality really does change from beginning to start and my memory is a little blurry of how he was like at the start. This is really a story about the unwavering love between two people.
Spoiler

Other thing I wanted to mention. I was really sad about HXX. It really came out of nowhere and I may not have picked up the hints. What surprised me more was the way Sheng Nanzhou completely lost hope by the end of it, and gave up on HXX (which at the time was completely understandable) This poor guy loved her for so long, but because of misunderstandings, time and age, they never properly got together until the end of it. The story weaves hints at their own stories, but by the end it it never actually blooms. I was just surprised by his acceptance. Even I found it hard to accept.

It's pretty interesting especially since our FL is a capable and hardworking surgeon (I think? she's definitely a doctor though) while our ML is a pilot. As of chapter 4, the ML seems like the scum of the earth as insinuated by the summary (I'm exaggerating...I know but still!) It seems the story alternates between the present and the past when they were in college that reveal more of their interactions!! This style is enjoyable since we will be able to easily see how the ML changes!! The translation is... more>> excellent so I'm definitely looking forward to reading this story!! Totally recommend!! <<less
2 Likes · Like Permalink | Report
Leave a Review (Guidelines)
You must be logged in to rate and post a review. Register an account to get started.