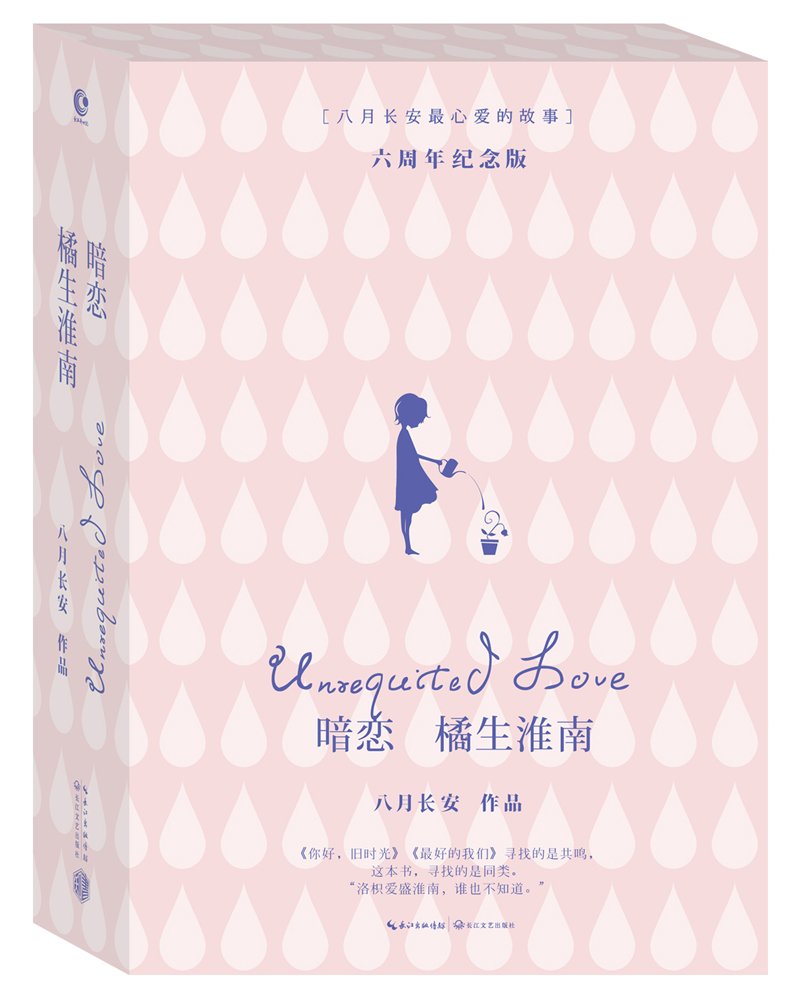 One entry per line
Ba Yue Chang An
八月长安

“Luo Zhi loves Sheng Huai Nan, but nobody knows about it.”

Have you ever loved a person, loved him so deeply to the point that your love was engraved in your bones, and yet, nobody knew about it?

As a result of a chance meeting that occurred when they were young, in the eleven years during which she grew up, Luo Zhi’s life always had indistinct impressions of Sheng Huai Nan.

His subsequent reappearance was so dazzling and so blinding, that from then on, Luo Zhi’s diary transformed into a one-act play – a one-act play that belonged solely to him.

Luo Zhi’s love was so humble, so careful, and yet, so proud. Her internal demons grew at such an alarming rate, there was no way she could easily and cleanly retract her love for him.

He was just there – in Luo Zhi’s heart, in front of Luo Zhi’s eyes. As long as she took a single step forward, she would be able to break the distance that had built up between them within the past ten years. However, the furthest distance in the world is not the distance between us when I stand in front of you, loving you despite you having no idea that I love you. Rather, it is when I love you, and yet I am unable to touch you.

In the noisy and busy city of Beijing, P University stood there with its spacious grounds, and yet it was like the faraway Zhen Hua High School in the North – leaving Luo Zhi with absolutely no place to hide.

One entry per line
Crush on You
暗恋橘生淮南

I Reincarnated, but I Think the Prince (Fiancé) Has Given Up (1)

These are recommendation lists which contains Unrequited Love. You should give them a visit if you're looking for similar novels to read. Alternatively, you can also create your own list.
More Lists >>>

This book was not an entirely easy one to read, as it grapples with the topic of unrequited love in rather great detail and depth. Through the lenses of Luo Zhi, we experience the humbleness of one entrenched in an unrequited love – we rejoice with her when she receives even the slightest response from Sheng Huai Nan, and we sympathise with her when the ambiguity of the relationship wears her down. In an unrequited love, one party has all the bargaining power, and this is clearly reflected in how... more>> Sheng Huai Nan treats Luo Zhi for 3/4 of the book – he isn’t fully committed to her and lashes out at her when misunderstandings crop up, and yet he isn’t willing to fade out of her life, and always tries to cement his place in her life. Because of the great detail and depth in which Luo Zhi’s emotions are described, this book can be rather tiring emotionally as we accompany Luo Zhi through her emotional rollercoaster. The female lead, Luo Zhi, is actually rather mature for her age, having experienced a major family setback when she was young. Thus, her unrequited love for Sheng Huai Nan is largely unselfish compared to most girls her age – she just loves him from her quiet little corner, and even when he entered into a relationship with another girl, she simply wishes the best for him, happy that there is someone who can make him so happy. She finally acts on her feelings when she meets him in University, but her long unrequited love and internal demons make it hard for her to approach him in an entirely pure and uncalculated manner. Each step is carefully calibrated to ensure that whilst she would leave him with a deep impression, she would still be able to walk away proudly in the event that things do go wrong. The male lead, Sheng Huai Nan, has issues to grapple with as well – in an unrequited love, although he holds the higher bargaining power before the two leads enter the relationship, this changes slightly when they finally confirm their feelings for each other. Sheng Huai Nan, unclear about why Luo Zhi likes him, feels that Luo Zhi likes his superficial self – the mask that he showcases to the whole wide world in his attempt to hide his true self. Although Sheng Huai Nan displays indecisiveness when deciding between Luo Zhi and his ex-girlfriend, his unwavering dedication to Luo Zhi after having confirmed his feelings is admirable. Never once did he waver in his feelings for her despite the increasing number of obstacles and misunderstandings between them, and he remains consistently staunch. <<less
10 Likes · Like Permalink | Report
Leave a Review (Guidelines)
You must be logged in to rate and post a review. Register an account to get started.

Reincarnation Of A Humble God

Reincarnated As An OP Dungeon: Ascension