Novel Updates
RegisterLogin
Theme
Search
Your changes has been saved.
Advertisements
What Happens If You Saved A High School Girl Who Was About To Jump Off?

Home >
Novel >
What Happens If You Saved A High School Girl Who Was About To Jump Off? 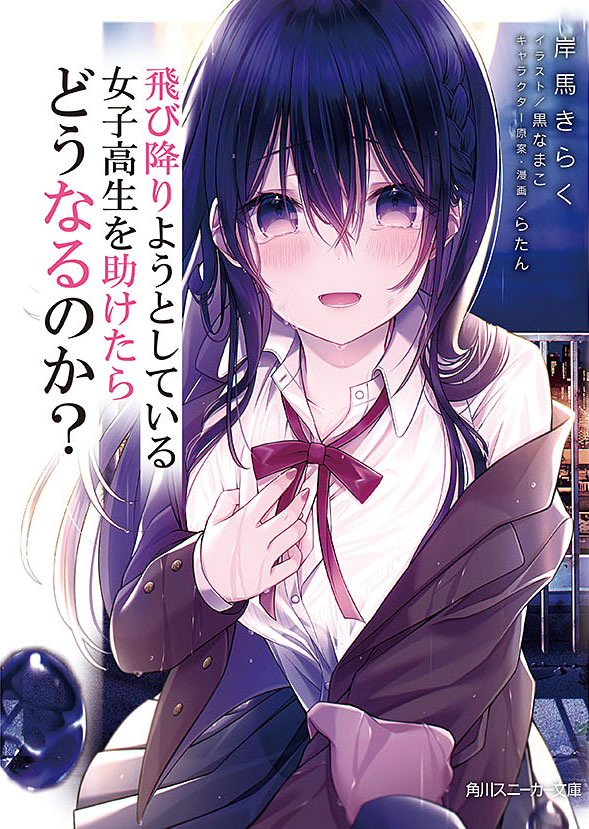 One day, Yuuki Yuusuke, who spent his high school life only in studying and working part-time in order to maintain his scholarship, found himself strongly wishing for a girlfriend.

On the way home, feeling lonely from such thought, he casually looked up into the sky and saw a girl who was about to throw herself off the rooftop of an abandoned building.

Thus, a new love story and daily life with a mysterious girl, Hatsushiro Kotori, which all started from a strange encounter, begins.

These are recommendation lists which contains What Happens If You Saved A High School Girl Who Was About To Jump Off?. You should give them a visit if you're looking for similar novels to read. Alternatively, you can also create your own list.
More Lists >>>

I liked it until chapter 7 It always felt a bit iffy to me but I liked the novel enough to overlook those until then. So the stories about a high school boy who saves a high school girl who was about to commit suicide, then takes her to his home, for some snacks I guess.... more>> Its raining outside, so naturally they have to dry themselves off. Hatsushiro (highs school girl) does that, but wait? She has multitudes of bruises on her? Dang what a clutz. Must've kept running into the wall. Lets just console her for now. Thats sort of the prevailing theme. Hatsushiro shows problem. Yuuki (high school boy) tries to fix it. If he can't fix it, he gets his friend to help him. Thing is, he never addresses the actual problem. Treating the symptoms but not the source. Sure, the girls going to be sensitive about why she wanted to die, but you know, she tried killing herself. Thats pretty bad.
Spoiler

Ok... here's the problem. Hatsushiro obviously has some sort of anxiety talking to people.

She also... 1. was going to commit suicide and 2. is bruised. And what does Yuuki do?

The natural choice. Shopping for clothes. Play games. Give food.

Note that Yuuki isn't s*upid, he's ranked top ten in his school or something.

So anyway, this formula drives the story until chapter 7.

A. Call the cops. B. Nothings wrong here.

Granted, after talking to his friend the next day, he realizes "Oh f*ck, bruises from being punched" since his friend does some big brain work and searches cases of bullying and finds a case where Hatsushiro gets slammed onto the ground and doesn't say jack.

Because schools would want this sort of thing to get published.

Anyway Yuuki trespasses onto fathers home, and he finds that the dudes beating the everliving sh*t out of his own daughter, and for no good reason.

No talking. No questions. Just beat the daughter.

Like... the dudes an absolute... well you get it. The dudes mental. Keep this in mind.

Yuuki saves the day, somehow getting in the house, somehow beating up the father (who's a former athlete), and saves the day. He didn't even call for help.

Father dude stumbles around, runs into 2 thugs and gets beaten up. I guess the father goes super saiyan and injures one and kills another.

The next day, the father is charged with excessive self defense.

In his jail cell, the father goes back to normal. Becomes a functioning member of society again. Like nothing ever happened. Makes sense killing someone wouldn't faze him, considering what he did to his own daughter.

Hatsushiro and Yuuki soon visit the father, and magically forgive him and even start liking him.

Yuuki reckons he should even forgive the father for at least 5 minutes.
What? I've heard of good samaritans but this is insane. It's like they learned nothing.

Keep in mind, nowhere does it even mention, not in the beginning, not in the end, that Hatsushiro went to the hospital for her wounds. Wounds dont magically disappear.

Lets do some big brain stuff.

Hatsushiro was beaten up for, hmm lets be extremely generous and say half an hour.

Thats around twice these professional fighters can last, and she's a high school girl.

Couldn't find anything for bare knuckle without having to invest my time watching a video.

Anyway, the girl definitely fractured some bones. Not sure if repetitive punches and kicks can break bone so I forgoed that. She also might have a concussion.

I also found something interesting about livers.

They are very vital. A failed liver will result in death.

They are also incredibly easy to break. Getting hit in the liver also does not feel good.

If a dude were to punch someones liver with a punch speed of around 5 m/s, that would injure the liver.

Boxers can punch over twice that, and an average healthy male can punch at 6 m/s.

Liver injuries aren't uncommon in boxing either, and can basically result in an instant win since it shuts you down, so it wouldn't be too bad since they can't continue.

Ok, but even if the father is a former athlete, he isn't a former boxer right?

Well, to make up for that, we have a lot more time, a very vast difference in power, and no rules.

Alright. I think its obvious that the girl at the absolute least, has gained an injured liver, fractured bones, maybe even internal and external bleeding and a concussion.

And Yuuki the clown, doesn't even apply first aid.

Humans dont magically gain resistance to pain and injury. What doesn't kill you doesn't make you smarter. Thats not how it works.

Sure, people like Phineas Gage, who miraculously survived a pipe getting shot through his skull have existed, but he only lived for another 12 years and was described by former friends as "no longer Gage."

It wouldn't be weird if the girl died considering this is only one of many times she was beaten.

[collapse]
It just seems so many people are so irresponsible in this story, its ridiculous. Hell, maybe they did go the the hospital but magically got past having to do any paperwork involving guardians. Wouldn't be strange considering the school the girl was at didn't care about her cracking her head open and bleeding all over the floor like a watermelon. The tag for "Lack of Common Sense" is absolutely true. If you ignore all its faults, its not a bad story, but I just can't stand Yuuki's monkey brain. <<less
28 Likes · Like Permalink | Report

Dude is creepy. Girl wanted to jump from the roof and is covered in bruises and the only thing he can think about is how cute she is, her cooking?! This novel treats such painful issues too lightly, I can't believe that there is sane person who agreed to publish that.
Spoiler

Actually this part where girl forgives her father is quite realistic (probably not intended) perpetrators of domestic violence are quite skilled in manipulating victims into thinking that it's their fault.

I really recommend this. This novel isn’t oh you became my girlfriend so we’re going flirt every single day type of sugar story, ofc they’re some sweet moments in there. This story is more focused on human drama, on why the heroine behaves the way she does, the character development is done quite smoothly and nothing is rushed. Another thing is that the characters are quite realistic, you probably met someone that resembles one of the characters. Probably one of the best romance novel I’ve ever read
9 Likes · Like Permalink | Report

This one has an interesting premise. Two people slowly fall in love with each other, which slowly cures the heroine's past trauma. I like it a lot. Then comes chapter 7. Imagine a scenario: your school bullies got expelled for bad grades. It... it literally didn't even remotely have anything to do the problem, the fact that you got bullied for years, you got wounds, both physical and mental, and no one cares about the bully, still remained. That's what happened in chapter 7. ... more>>
Spoiler

So our amazingly intelligent protag-kun handed his girlfriend to her dad, despite knowing about her scars on her back, and noticing the obvious change in both her and her dad's manner.

So our amazingly intelligent protag-kun realized his s*upidity and got to his girlfriend's house, only to witnessed her dad beating the sh*t out of her, then processed to talk-no-jutsu and successfully mindbroke the dude, despite losing out in a simple argument of "should I call the police".

So this dad was under arrest for beating the sh*t out of some random thugs. And magically repent for years of harming his daughter. But still not charged with domestic violence. O... kay?

Wait, it didn't end there. The daughter in question had a talk with her dad, AND FORGAVE HIM. DESPITE. BEING. SO. DESPAIRED. TO. THE. POINT. OF. SUICIDE. *surprisedpikachuface*

I'm sorry. This novel's painting suicidal and possibly domestic violence as a positive trait of a heroine and I can't suspend my disbelief too much for this. The girl needs counseling and child protective services, not a boyfriend.
6 Likes · Like Permalink | Report

I really liked it! The couple was so sweet to each other that they could melt my heart. In addition, adding a bit of drama to the story made it way better. I hope I'll get to read volume 2 in an English version translated by the awesome I Cant Read JapaneseTL.
2 Likes · Like Permalink | Report
Leave a Review (Guidelines)
You must be logged in to rate and post a review. Register an account to get started.