Novel Updates
RegisterLogin
Theme
Search
Your changes has been saved.
Two Swords and the Angel’s Feather 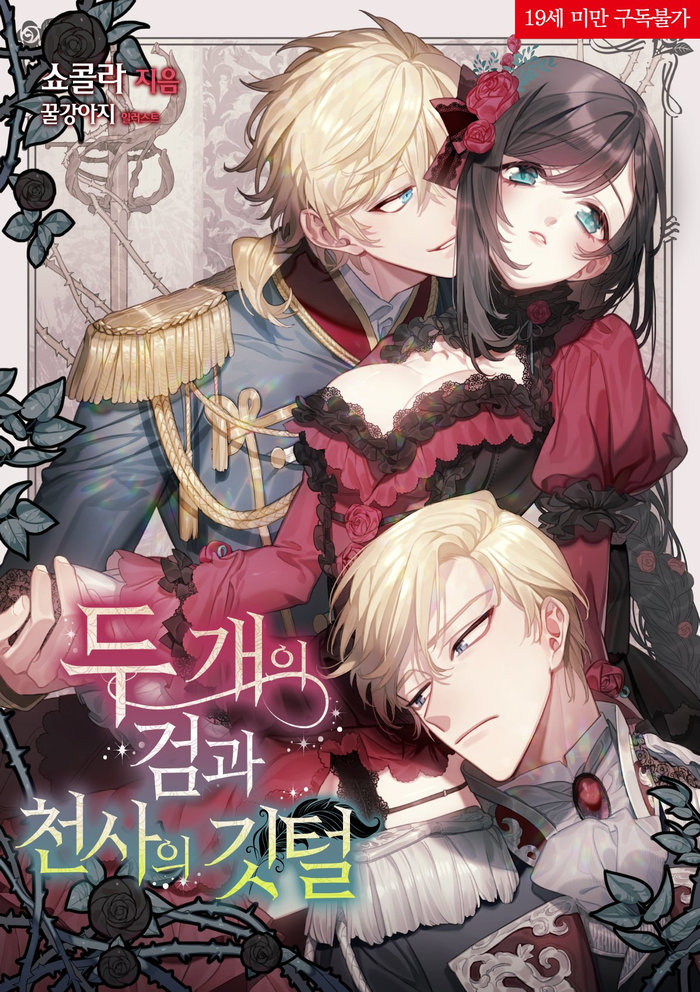 One entry per line
쇼콜라

One entry per line
꿀강아지

The Incentia Kingdom is at its highest golden age since its establishment.

The two kings who created the glory were Ced the Wise King, and Aryll the Kind King.

And the queen—Celia is loved by them.

Over the years, Queen Celia gave birth to twin princes and is searching for her exclusive maid.

Meanwhile, Ellen, the second daughter of Count South Horn, who heard the news, desperately grabs the only chance to escape their house.

Two hands approach Ellen, who has become the queen’s exclusive maid.
River Pelbrook, captain of guards of Madison Avenue, and his brother, Ryder Pelbrook, the Duke of Madison.

Ellen is confused when she sees them telling her that she is beautiful even though she had scars all over her body.

Is what they called love even real–?

Another romance unfolds at the backstage of the royal palace.

These are recommendation lists which contains Two Swords and the Angel’s Feather. You should give them a visit if you're looking for similar novels to read. Alternatively, you can also create your own list.
More Lists >>>

I was honestly kind of shocked by this one. I found it on the translator's site so I didn't end up reading the description only looking at the cover. I was initially confused about who the ML (s) were, the first ML pair presented are the kings so I feared cheating or something but my fears were groundless. Because of some misunderstandings of my own (not the translators fault) I was unsure. BUT THEN! Man, the pay off in chapter 11 made it all worth it. I fear that because... more>> of tags about harem/love triangles and such I wouldn't have picked it up but now I think this has some serious heartwarming fluff potential. And I am here for it. And I also recommend it to you as well. And if we are very lucky, this also has some very kinky undertones so we might be in store for some #smutfluff P.S. The translation is excellent, thank you translators! Please forgive my ungrateful self for being desperate for more updates. <<less
15 Likes · Like Permalink | Report

5/5 I've not been this jealous of a MC in a hot minute but when I tell you I'm about to cry from not having this kinda mmm ✨life✨ with such ✨ activities ✨😭😭😭 anyways... The story is also interesting in it's own way outside of the activities 😉 it's interesting to see the MC being shown affection and not have it be from her looks or reincarnation or the like. They just like her for her. And getting that affection is having a positive effect on her and I love to... more>> see it <<less
9 Likes · Like Permalink | Report

I like it, but...I wish the author had gotten better information over burns and burn scars. This section is collapsed because I go a little too deep into scar description 🤣 ... more>>
Spoiler

The way the scar is described, makes it seem like it's a recent one, or only a couple of years old, when in the story it's actually implied that it's actually much older, over a decade old.

Second degree burn scars fade to the point of visible discolouration, with slight ridging. This description is based on my own second degree burn, that I got as a teenager, and is currently no more than a curious blip on my skin. It's definitely not still red, nor swollen (although it did stay like that for years), after almost 20 years. (I actually have many burn scars... mostly due clumsiness XD)

Third degree burns also fade into discolouration, although the damage stays virtually permanent (since the skin melts, it's not pretty), especially in the most affected areas, however neither do they stay red for that long.

According to the characterisation, she should yes have a scar, but not as visible, ironically, the cover art makes a better job of depicting the scar, as the outer edges should be barely visible and only the most damaged areas should be obvious to a casual observer.

[collapse]
Besides this, it's a good story, I actually really enjoy it. One of the MLs is definitely the kind of guy that you like to read about, but may get goosebumps at the idea of actually dating someone like him. Boy doesn't have the word "Slow" in his dictionary, nor any of its synonymous. Poor MC, but she seems to like it, so I guess she's lucky? In any case, the story is enjoyable and the translation is pretty good, an all around enjoyable read, if you don't get too deep into burn scars descriptions 😅 <<less
8 Likes · Like Permalink | Report

This is the first time I've read a novel where the MLs are both not abusive or manipulative to the MC, especially during this time setting. They respect one another and teach how to love the other. I really like both the MLs and the MC. Also, the side characters like the Queen and two Kings, all three of them act as love gurus for the main leads.
2 Likes · Like Permalink | Report

(This is a rather light review, mainly on some of the word play. I do believe this novel is doing splendid in many aspects as of my point in the novel, but c'mon, this is important too.) This feels more like a comedy than smut. The dialogue during those moments makes me burst into laughter, rather than whatever effect it was intended to give. River says the funniest lines thinking it's hot, and I'm still over here laughing while typing this review. I mean, if you're not one to... more>> pay attention to the dialogue and just read what's happening, this might not be as funny to you as it was to me. The transitions aren't choppy, the sentences flow together, and there aren't unnecessary time skips. Some of the wording may be confusing, but the following lines immediately supplement that. Either way, it's earned a bookmark even though I'm pretty early into this. Even if the plot turns out to be horrendous I know whatever they say will make me giggle like, "haha heehee."
Spoiler

Like what? Hot honey water? Dude? Sir? Not to mention that she described his thingaling as being "almost as big as her forearm." No way she'd survive that, pretty sure miss is going to end up injured once I go to the next chapter. Lol. I lost it when he kept referring to her "mouth" as a hot spring. My goodness it was comedic.

[collapse]
So far, I believe everything is satisfactory with the storyline outside of what everyone's here for, and I do like the set up of her being a servant. Her inconsistencies are realistic and she isn't unnaturally smart, so I'm rather curious to see what her personality ends up as. <<less
0 Likes · Like Permalink | Report

Very decent smut! A good mix of p*rn and story. The story was a little too "fairytale" to be fabulous but for smut this is one of the better ones. Sexual Consent (from what I remember) and healthy-ish relationships. Too bad it is short but I think the author could have put more into the story.
0 Likes · Like Permalink | Report

World of Alvarra: Rise of the...