Novel Updates
RegisterLogin
Theme
Search
Your changes has been saved.
Why, Can’t You Eat? 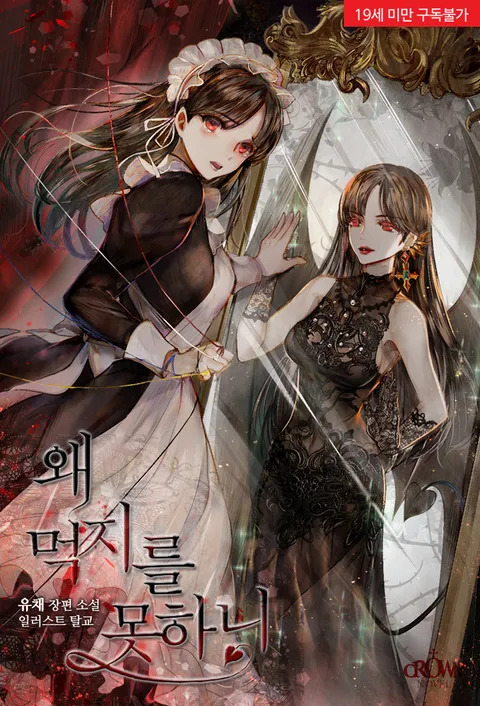 One entry per line
Yuchae
유채

Status in Country of Origin. One entry per line
120 Chapters (Completed)

One entry per line
Crown Novel

The woman who would seduce and pounce on men every single night—Lilith Sera.

And when the day comes…

She would be left with shameful memories from last night.

“Lily, do you happen to know about the succubus?”
“…I read about it in a book. They’re demons… that tempt people and do bad things…”

During the spring of her sixteenth year, that was when she first saw the sign. It was a strange pattern underneath her navel that told her… she’s a succubus.

She had a clunky ring that was supposed to suppress her instincts. It was a relic that her grandmother left for her.

But on the day the kingdom fell into ruin, she lost her ring.

Without that ring, Lilith would be conquered by the instincts of a succubus.

“Then, shouldn’t you take responsibility?”

“I’m already looking for it as hard as I can. I said I’d take responsibility, but if I’d known this is what that meant…”
“If you don’t want me to come here every night, then find it quickly. My treasure.”

After she lost her ring, every night, she looked for men who would become her prey.

Odil was just one of them.

“You came here yesterday, too! Please, just do it in moderation and leave.”
“Every time you say such mean things, I want to make you even cuter.”

Stop, just give up.

This instinct, once awoken, constantly craved for prey every night, and it was nice to see Odil’s flushed face whenever he’d see her after she came looking for him again.

“Odil, it’s far from being over. I won’t let you go until morning.”

This is a story about Lilith, who transforms into a succubus once night falls, and her five men.

These are recommendation lists which contains Why, Can’t You Eat?. You should give them a visit if you're looking for similar novels to read. Alternatively, you can also create your own list.
More Lists >>>

This is all smut with a smattering of plot to string together all the smutty encounters. It's pretty good smut so if that's your thing you should enjoy. Also, all of the relationships are consenting. Some are not happy about it, but they agreed to the arrangement so she's not forcing them - though Lilith (the succubus side) is totally a sh*t disturber. It's kind of amusing to see things flip between Lily and Lilith in terms of Lilith trying to stir up trouble and Lily trying to keep her head... more>> down and just work. Since smut written about consenting adults is hard to find I will definitely keep reading this. 4 stars for now, but I'll reconsider depending how things progress. Edit: above written as of chapter 6; below as of chapter 22 This is still quite good. There is rather more plot than I was expecting based on the initial 6 chapters. Chapter 22 edges up against dub-con, which I am very hopeful is a one off. My current impression of each of the harem members (as of chapter 22) in 5 words or less:
Spoiler

Clarification on the last 2: Reg is not part of the harem yet, but given his screentime so far, I'm pretty sure he'll be joining. Damien has been on a recon mission since the start so chapter 21/22 is the first (smutty) encounter with him (there was a brief bit of his mission several chapters back). He does not present a great first impression. Especially after the way the others have been behaving around Lily the last several chapters - he figures out Lily is not Lilith, but goes at it anyway. I am hoping my impression of him will improve.

[collapse]
Aside from chapter 22 having a bit of a dub-con vibe, this story is still very much about consent (which as I said before is pretty refreshing for a smut novel). Edit: Chapter 23-25
Spoiler

I still think Damien is an a**hole, but man did he get some pay back. Chapter 23 and 24 she turns into Lilith and makes him aware of how it feels to be dominated. Alas, she turns back into Lily and apologizes to him (he deserved it girl!). Chapter 25 further cements my belief that Reg will be joining the harem and also throws in a bit more plot.

[collapse]
Edit: Chapter 26-34 Mostly plot for these chapters, but I was disappointed with c34 because the author has gone the dub-con route again:
Spoiler

Gotta say, that is not the way I was expecting Reg to join the harem. The fact Lilith was firmly aware she shouldn't touch him because Lily will not be able to live with herself AND there's no contract, but then turns around and pretty much forces him anyway made that chapter an uncomfortable read. I'm all about consent so depending how Reg reacts to this in the following chapters this might be the line that was crossed for me.

[collapse]
Still going to read this (at least until I see how the things I mentioned in the spoiler above are addressed), but I'm concerned that dub-con is going to become a trend... Edit: Chapter 35-41 Well, I should have known better when the author went dub-con the second time. The c34 issue wasn't addressed at all. It was either ignored or joked about depending who was involved in the conversation and that just irritated me if I'm being honest. Unfortunately, this author is not all about consent after all. That might be part of why I was so irritated these last few chapters. It is so hard to find good smut where everyone is consenting. Anyway, if you hadn't guessed, chapter 41 ends on another round of dub-con and I'm done. 3 times = trend in my book and I'm not interested in sticking around to be further disappointed by the initial promise of this story not following through. Changing my rating from 4 stars to 2 and dropping this. <<less
26 Likes · Like Permalink | Report

As a smutty novel it has quit a good plot, and its not only smut through the story. as for the main character (female lead) I love her succubus/dominant side, the real one - the shy, is a little bit annoying, they story got boring at some ch then she didn't turn into a demon... Tbh I would rather read the all story then female lead is succubus... over all its good and fun read, buttt in the process I started to wonder who the male lead is, I wish it... more>> didn't had one, revers harem ending is exactly what this story need, but unfortunately I think its the silver hair guy. The cold guy who doesn't like FL at first... And the fact is that the all harem thing doesn't fit her personality, the shy girl who wouldn't do all those things if not bc of the succubus... just I dont see the harem ending, but we will see also I wish the real FL would never come back, these kind of novels likes to portrait fl's way too kind and caring, it give the unreal feeling, ofc its a unreal story, but still <<less
2 Likes · Like Permalink | Report

I find this novel to be pretty enjoyable to pass the time, or for sm*t (a little more hardcore than other M x F novels, MC is proactive, tho she does feel ashamed/shy often). The story was mainly focused on the main characters's relationships and emotions, not many external factors affected the characters (except for in flashbacks and the climax of the story). It could get boring at times, as the story was 80% of the time just conversations, smut or interactions with the MC and mls as well as MC... more>> inner monologue with her succubus self, but you really get to know how the characters interact with each other. The plot is fine, the characters move it til it fades into the background after a while (not in a bad way)... The novel doesn't really go too deep into the mls's and mc's past. There are no politics, no scandels or life changing rumors. There are basically no side characters that play any important role (except the emperor ig, his role in the story was a bit hyped up considering he wasn't that involved afterwards). I feel like I may be describing the novel as not good, but the aspect that made me give the novel 4 stars is because the later bits of the story focused on mc's personal growth, and the mls and MC did do some mention of the earlier dub con (not a lot tho, but they do acknowledge it to some extent?) which doesn't usually happen at all. I do find character emotions and interactions to be pretty mature and realistic, nothing heart wrenching or shocking happens, the characters communicate really well. Its a good novel to read as you get a weak post novel depression, and don't feel sad/empty for too long (5 mins for me after reading the final sentence). The ending is open, so you don't get to know what happens next. Kind of wish there were extras... Hope you found my review helpful. <<less
1 Likes · Like Permalink | Report

I can't really like this one. The FL doesn't consent to what her succubus side does, and her succubus takes advantage and assaults others against their will, imagine constantly having to watch that and be associated with those actions. Not only that, but the MLs start liking her, and... ... more>>
Spoiler

They don't want to lose her, so they think about ways to trap her and not return the ring that restrains her succubus. She's in tears and mentally exhausted at this point.

[collapse]
Smut wise, it's got its steamy moments for sure, and many people might enjoy this novel. It's just too much for me when there's no end in sight to her and others' terrible situation. <<less
1 Likes · Like Permalink | Report

I love this novel so much!!and the plot and smut is good!i highly recommend it to the people that love reverse harem smut (btw its my first time giving review) anyways I wonder who the ml...... Also I hate the succubus she's getting on my nerves she do it with those guys without the FL consent but its still worth reading btw thank you for the translation!!❤️
1 Likes · Like Permalink | Report

I love plot with smut, but also smut with plot, and this definitely falls into the 2nd category ;) not too much plot that there's barely any spicy scenes, but just enough so that the story makes sense and its not just two people (or in this case, multiple people) going at it again and again and again. The snusnu is well written, and the distinction between Lily and Lilith is clear and kinda fun to read. Generally, consensual, with about two dub-con scenes so far (look at review by PalenMisha... more>> for the specific chapters if you want to avoid it). Besides that, it's a great bedtime read lol <<less
1 Likes · Like Permalink | Report
Leave a Review (Guidelines)
You must be logged in to rate and post a review. Register an account to get started.

Of Blood And Stardust

The Youngest Prince Has Left