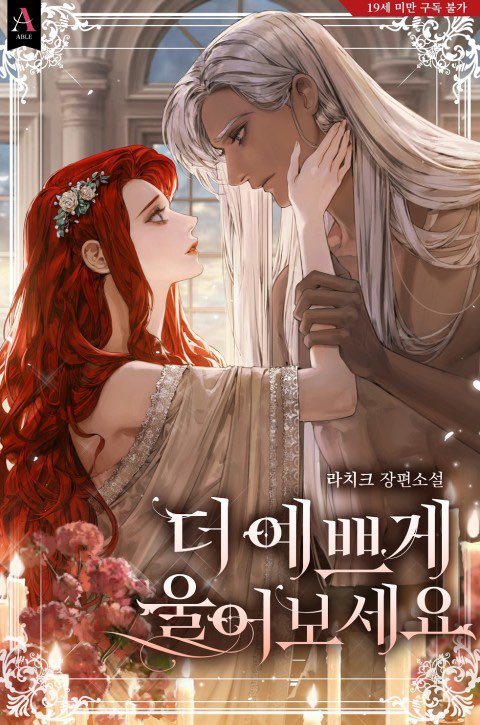 Status in Country of Origin. One entry per line
151 Chapters (Ongoing)

One entry per line
Able
RidiBooks

Sleeping with him was a very impulsive decision.

Yesterday, Damia’s first love that usually filled her with anxious joy, broke her heart with a cruel rejection:

Her manipulative step-brother smiled at her.

“Didn’t I tell you? You will eventually come to me.”

Damia was fed up with all these games.

So she seduced and slept with the man who had just arrived in the north.

The beautiful eyes belonging to the woman subject to terrible rumors held no lust, instead Akkard found the ballerina to be rather clumsy and pure.

“Your crying face is pretty. Cry a little more.”

He grabbed Damia’s ankles that tried to flee, overworked from his persistent ardor, but that only made him covet her even more.

Damia, lying beneath the ferocious beast, literally cried herself hoarse.

The man kissed all of her tears, and painstakingly licked her eyelids.

And soon he laughed greedily.

“Try keep crying under me from now on.”

The man’s lips whispered until the legs broke apart.

….It seems that she had chosen the wrong person to play with.

The Count and the Maid (2)
Red Labyrinth (2)
Your Majesty is Annoying! (2)
The Pharmacist Lady’s Secret Trading (1)
You are the Supporting Role (1)
I Became the Master of the Villain (1)

These are recommendation lists which contains Try Crying Prettier. You should give them a visit if you're looking for similar novels to read. Alternatively, you can also create your own list.
More Lists >>>

The smut is repetitively and pretty much not much to cheer about. MC however is the biggest factor why I liked this story. Mainly because MC have only one drive anf that is to sleep with handsome men. Honestly I feel like that is fair. None of the male leads in these stories seems to be likeable. They are all horrible abusive, manipulative and really suck at pleasing women. Honestly their main metodh is just stick the stick in side and jackhammer. Also I don't understand these system genre. Where the MC get... more>> stuck with an ai inside their head which do barely anything in helping her. The downside to this story is the fact that there are several scenes where the MC is very much telling the other party she doesnt want to have s*x only for them to completely ignore her and do it anyway. If r*pe or sexual abuse is a trigger for you I would not suggest this read for you. <<less
0 Likes · Like Permalink | Report

Honestly this is my first time giving reviews, and I feel like I don't have any rights to .
Spoiler

Personally I HATE "Playboy meets virgin girl and falls in love" Trope. I frickin hate it with my whole life. So that's why I feel like I shouldn't rate it, cuz maybe others like this Playboy trope

[collapse]
So about the ML :
Spoiler

He is shit. He is a Playboy, who doesn't believe in Love, likes playing with girls (Different girl every night) but throws them away when he has his fill of sexual desire (aka he thinks girls/women are Object for sexual relieve only), and He HATES Virgins because he thinks they will demand for responsibility and Love from him because They gave him their first time. That's why he hates Virgins. And he is also always the one who throws the women he slept with away the next morning, meaning he always rejects them the next day, and he has never been the one rejected. So he is proud cuz he is famous and gives away his freely everywhere.

Damia (FL) has a crush for 10 years to her best friend, but suddenly her BF becomes a paladin and is about to leave. So Damia gathers courage to confess to him, but he rejects her and says to her to find a new Man.

Damia has a brother (IDK biological brother or step-bro) who lusts towards his sister. Btw Damia is very beautiful.

So she decides that because she got her heart broken and Her brother is planning on raping her, she will sleep with the s*upid tr*shy Playboy.

So that's how it went, they had a night together, bla bla bla. The next morning Akkard (tr*shy ML) finds out that she was actually a virgin because there was blood on the Bed sheets. Then he begins hating and all despising Damia thinking that she tricked him so that He marries her and will demand for love. Then he came up with an idea to actually r*pe her and sleep with her again until he is satisfied before she demands for responsibility and asks him to marry her.

You can imagine how the next day of a poor virgin girl who JUST got her first experience went, yes she was forced by him to have s*x again, she kept pleading that it hurts and she had enough but he still kept going until night time (He did her for more than 24 hours).

The next, next morning (?), He woke up and was about to tell Damia that he was satisfied and plans on throwing her away, but gets interrupted by Damia instead as she says "Thankyou, I'll be going now. Have a safe trip going back home" something along those lines.

He gets all furious and all inferiority complex (s*upid monster) and says "How dare she throws ME away, I was always the one throwing girls out after using them, but This s*upid Damia dares throw someone like ME, I'll make her suffer until she begs for me to not leave her, and when she does begs me then I'll leave her that time hahahahaha"

its kinda immature to throw herself just bcs shes hearthbroken. So I thought theres more into it.

She throw herself onto Male lead knowing he do not invest hes feelings to anyone in attempt to run away from upcoming dangerous thirsty wolves.
[collapse]

In any case this is hott smut!! Great job on translators.
7 Likes · Like Permalink | Report

The smut is top tier! The plot takes a bit to start, but I already love the friendship btw. The FL and Cecil.
The FL unapologetically takes what she wants and is quite quick witted.
I'm not overly happy with the ML so far - but the flags raised so far promise a nice character development! Just give it a try - and maybe continue reading for longer than the first view chapters: plot is happening, I promise ;D

A must read. Smut scenes were hot but up until probably chapter 50 (from raw) From 1st chapter to 80 you will see this tr*sh smart mouth talked negative about their relationship and kept stepping on damia heart, positive thought over and over. Now at chapter 119, he realized that he love her but well it way tooooo late. Table has turned.
5 Likes · Like Permalink | Report
Leave a Review (Guidelines)
You must be logged in to rate and post a review. Register an account to get started.