Novel Updates
RegisterLogin
Theme
Search
Your changes has been saved.
This Book is Not Available for Subscription Under the Age of 18 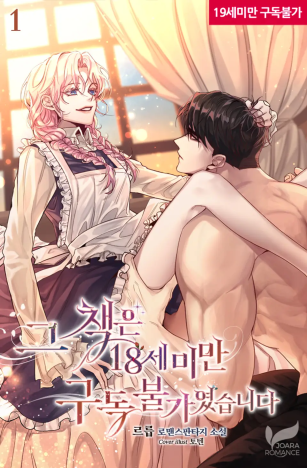 One entry per line
Toten
토텐

Status in Country of Origin. One entry per line
8 volumes (Completed)

One entry per line
joara

In an erot*c romance novel, I transmigrated into the role of a villager who was killed with one shot.

I was lucky to defeat the Demon King, who was the strongest in the world, while I was struggling to survive . . . But a problem arose.

“Erina! Is this enough chopped firewood?”

Oh my God! Are you planning to cut down every single tree in this area?

Seeing the firewood stacked up to the height of the house gave me a headache.

The problem was that the Demon King had become my servant. This was the all-powerful final boss in the original novel.

These are recommendation lists which contains This Book is Not Available for Subscription Under the Age of 18. You should give them a visit if you're looking for similar novels to read. Alternatively, you can also create your own list.
More Lists >>>

This novel is so good to read 'cause the FL and ML is so cute and funny. ML act like a child if FL doesn't give him attention, he'll be upset and whine while questioning who/what does she pick, him or that (things/beings name). Thus, FL is soo tired of his stubborn and whiny attitude but she still does what he told her like "praise me" or "kiss me". However if she didn't do it there's naughty consequences she'll received as her punishment. Oh once you read it you'll understand... more>> what's demanding FL to do it for ML fufufu~ <<less
7 Likes · Like Permalink | Report

3/5 It's decent. Not much plot going on right now, just character dynamics and being able to see the interactions between the MC and ML. ML doesn't really have much of a personality apart from fluffy dog to MC. The plot is pretty interesting. Very straightforward but cute and fluffy. Smut is actually pretty good in this. It's mostly/is consensual. If you want to pass time and/or get off, this is a good read.
3 Likes · Like Permalink | Report

Over all, the story is alright, but not great. There are a couple chapters I advise people to skip. Starting on chapter 22 or 23, the translator starts giving a trigger warning. The trigger warning applies to chapters 26 and 27 and one of the chapters before that.
Spoiler

Merson's underling's are threatening this guy (he's the one mentioned at the beginning that wrote a letter to the original Erina) to find Erina. Well, this Guy has a hobby.
His hobby is torturing, murdering and raping women. Even after they die. (So he's a murderer, rapist and a necrophiliac.) They are threatening this utter piece of tr*sh, saying they'll give him so many days to find Erina, and also mentioning they can smell the blood and see? At least 20 women who he had murdered.

[collapse]
. Then in chapter 26, that b1tch Chenin makes her second appearance.
Spoiler

. But she's not alone. She's having s3x with her "husband". He's a nasty, old, and fat man. So he's being mean, questioning her about Sezaine, and when she'll have the deed in her hands etc, all while having s3x with her (it's descriptive). He pulls out and finishes just as she's hot and bothered, says something else and then forces her to do an*l. Once he's done, he says something about not letting her have his seed until she gets the deed, washes, gets dressed and leaves. Do NOT feel bad for her though, because she abuses the maid that came to help her AND THEN MAKES THE MAID DO ORAL ON HER. As this is happening, the utter piece of tr*sh walks in. He's the oldest son? Of her husband. They have a conversation (I skimmed because the whole thing is just disgusting), Chenin asks something along the lines of how would the husband/father feel if he knew that his son and concubine regularly had sex, some other words were said, then he leaves the room. On the way he's thinking about a woman he had murdered and [email protected]
The underlings show back up, ask if he's found Erina yet, threaten him again and leave. He goes back into Chenin's room, the poor maid is STILL being made to do oral on her. Not sure what happens (because I skipped down a paragraph or two), but then he starts having s3x with Chenin and mentions that he needs to find a woman. Descriptions of s3x. Chenin asks the name, he tells her. Chenin stiffens up, stops having s3x with him, gets b1tchy and calls Erina names. He then forces the poor, poor maid to do oral on him as well, while Chenin tells him about Erina.

[collapse]
I was so, SO GLAD when
Spoiler

Merson and Erina have their first time.