Novel Updates
RegisterLogin
Theme
Search
Your changes has been saved.
Advertisements
The Villainess, Cecilia Silvy, Doesn’t Want to Die, so She Decided to Crossdress

Home >
Novel >
The Villainess, Cecilia Silvy, Doesn’t Want to Die, so She Decided to Crossdress 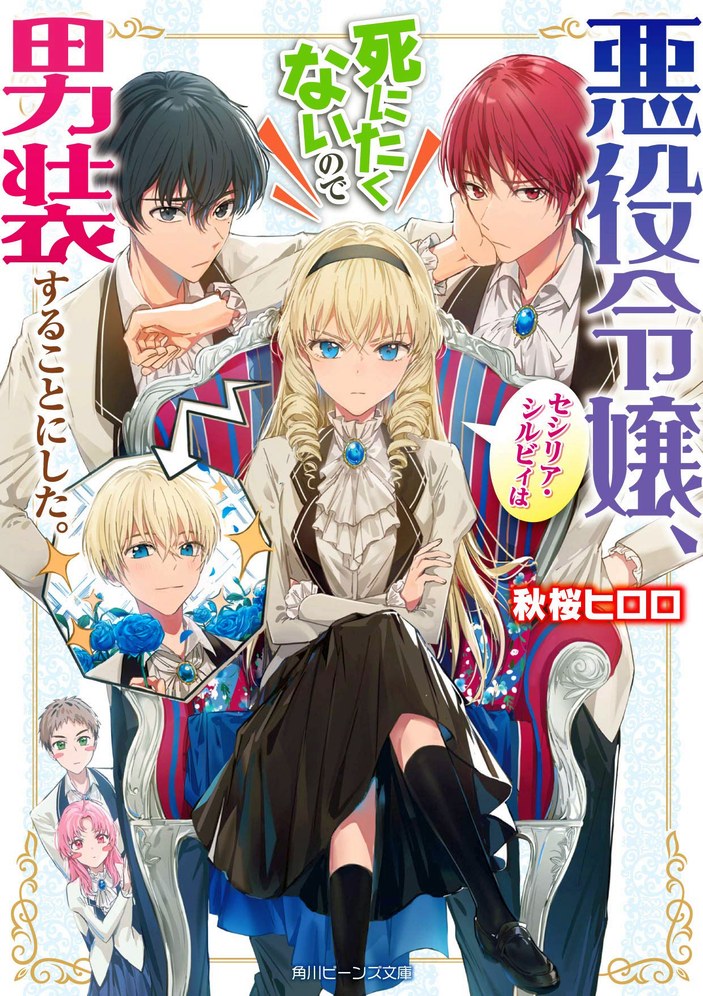 Please forgive this daughter who is tainted.

I, Cecilia Silvy, will strive to continue to live peacefully…

I have decided to become a man!

In order to avoid her miserable future, she decided to spend her time at Wruhel Academy, the main stage of the game… as a man.

Will she be able to complete her school life without anybody discovering the truth?!

These are recommendation lists which contains The Villainess, Cecilia Silvy, Doesn’t Want to Die, so She Decided to Crossdress. You should give them a visit if you're looking for similar novels to read. Alternatively, you can also create your own list.
More Lists >>>

I must say that the MC Cecilia is very likable and refreshing. So the background is that she was an otome maniac in her past life BUT it's different from some other villainess protagonists. She did say she had a normal life outside of her personal hobby so it's good that she's well adjusted. She also recognizes that she is changing the storyline. She's quite unique and eccentric and chose a pretty different route than most do. I must say she is doing a great job playing the perfect otome prince.... more>> In fact she is actually doing it a little too well since the academy girls see her as idol-prince. Her little brother Gil is also super cute. I think he's meant to be a bit of a tsun. As of chapter 5 we don't have much on the others but I think based on the cover image that the heroine is going to end up fancying Cecil (ia). I'll come back to write more eventually as more characters are introduced. I've tried to read a bit ahead in the raws on Syosetu (just two chapters) and it seems like the prince can't tell Cecil is Cecilia but he seems to be interested in Cecilia because they met as children and she was different from what he expected. (He thought she would be spoiled original Cecilia but she was already transmigrated Cecilia) And so... he is jealous of Cecil (ia) who is pretending to be friends with Cecilia. So conclusion is that our MC Cecilia will most likely have a big harem. <<less
27 Likes · Like Permalink | Report

The premise is so fresh and good for an otome game reincarnation novel.I totally love the MC. She’s so funny but yet not s*upid. She knows what she’s doing, the consequences of her actions and how the plot is changing. Her decision of crossdressing in her situation seems totally reasonable as there is no other choice for her. +1 for good supporting and cute brother. I like how the author is writing this. Chapters seems a bit short but actually they are the perfect length to read without getting tired. lets see for... more>> now how it goes <<less
21 Likes · Like Permalink | Report

The MC is an idiot. She's the type of MC which is very dense in relationship-related things, which I don't like. It might be cute and endearing to others, but it's just plain annoying for me. It tires me out. And like I said, she's an idiot. I don't think she thought about the disguising-into-a-man-thingy well at all. She's rash, dense, just... an idiot. Truly an idiot. I wonder how she managed to fool everyone but ever since she otome story starts, she magically exposed her identity to the others bit by... more>> bit. She doesn't put up any guards at all... sigh. Despite those, I still want to know what's gonna happen further on. Thanks for the translators picking up this novel, it's truly an interesting twist to the usual 'transmigrating into an otome game' stuff. <<less
17 Likes · Like Permalink | Report

This had all the right elements to be a great novel, but completely failed in execution. Some things that completely ruined this novel for me: I am incredibly frustrated. I just wanted a funny/fluffy love story. I didn't even need logic, or plot. I got nothing with this. 32 chapters in, I get NOTHING. For those who think I may be too harsh on an obviously light-hearted novel, it's not the idiocy that bothers me, but the way is it being used that makes it so unreadable. 2 stars for great translator and decent beginning. I don't see the plot getting any better at this point and I won't wait around for it to.
11 Likes · Like Permalink | Report

Interesting premise for an Otome villainess novel, and I've been reading a lot of those. The only other one I've seen that involved crossdressing from the start was written by the Outaishihi author and done in the vein of that work, and therefore not my cup of tea, so I'd really like to see where this goes. Especially since the translation is very good.
8 Likes · Like Permalink | Report

The genre was not so cliche because of cross dressing, that early chapters would really make you hooked up reading this. However, it seems the pacing was kind of slow and although the plot was not that generic, its getting flat and boring. But I'm still waiting for more chapters and hoping for more development in the future. Kudos to translator and editor san!
7 Likes · Like Permalink | Report

As of now I find the story really interesting. It is the typical rebirth into a game type of scenario, where the MC, who is a vileness, remembers her past life, but her take on how to surpass all the death flags is really funny. It's a light read and keeps you wanting more!
7 Likes · Like Permalink | Report

Translation is good, the plot sounds interesting and I came here looking for genderbender stuff, and I found this. Gave this 3 stars for the translator and interesting plot... At first. The plot sounded promising, well it is promising, but logic doesn't really apply to this novel as the MC fills in too much information by herself. She assumes a lot of things by herself and it makes me annoyed. It's the typical love triangle with "Prince" character and "step-brother" fighting over the MC, although she's too frickin' dense to get it,... more>> with the fujoshi FL and her love interest (?) as the spectators. MC is the "dense" type, or as I would say, annoying as hell. She misunderstands stuff, dense, and has ABSOLUTELY NO PROBLEM SLEEPING ON THE SAME BED WITH SOMEONE ELSE ON IT WHILE SHE IS CROSS DRESSING. I honestly don't mind if the characters sleep in the same bed (while it is not my ship) but she said herself that if she gets found out she'll be dead (which is of course, one of her assumptions without using her brain) and yet she has no problem with sleeping in the same bed as long as she has a wig on? lOGiC iS AwESomE (She definitely hasn't thought carefully about the whole "cross-dressing" thing) It's a nice read (if you ignore the s*upid MC and throw away any sense of logic remaining in your head) and the translation quality is nice, and the plot is actually not that bad? Maybe??? Well, I chose to drop it. Sorry for making you read this long review and I apologise for the bad English. <<less
6 Likes · Like Permalink | Report

Fun, but more than a little s*upid. I really enjoy that the heroine is clearly another reincarnated person but seems to have zero intention of taking advantage of the situation and is just kind of hanging around being a pro and spreading BL filth to this pure untainted world. The MC herself is likable enough but I hope they don't drag out her s*upidity for TOO much longer. Which they will, of course, so that's unfortunate. This really seems like a novel that should be over in about two volumes, maybe... more>> three. One to cover basically everything I've read so far, one to make it clear who the ML is and the third to finish wrapping up the main story and wrap up the romance. I really doubt the author is going to restrain themselves like that, however. <<less
5 Likes · Like Permalink | Report

This is entertaining tr*sh. The world makes little too no sense and the main character is a moron. But, despite everything, it's too funny. I came into this with nothing to do and came out with the same s*upid, giddy feeling that you get when you watch a guilty pleasure TV show. If you're looking for braindead frilly entertaining love stories and you don't care about much else this is perfect. It's not good but it is perfect, if you know what I mean...
5 Likes · Like Permalink | Report

Okay, sooo. I read some if the reviews here before actually reading the novel and I completely understand why some people love the MC and why some don't. I personally do enjoy Cecilias personality. She sure is a dense moron, but I kinda like it. Reading this is really easy (english is not my first language, that's why I saying this). There's no big drama too (for now), so it's really relaxing to read this. At first some scenes were quite cringey, however the feeling of doki doki is stronger. It's... more>> funny, cute, cliché - reminds me of fanfictions I used to read on wattpad, but that's alright lol. <<less
3 Likes · Like Permalink | Report

Definitely A G O O D O N E ! This is a very interesting and refreshing novel since you don't get to see a cross-dressing villainess much (“By A Slight Mistake” is the only novel I know that had a MC who is a crossdresser too). The art and description caught my attention the first time I read and saw it, I love otome based novels, so I think that adds to the point. I also really like the relationships between the characters and their interactions towards each other. ... more>>
Spoiler

Especially between Gilbert and Cecil (ia), I̶̶'̶̶m̶ ̶w̶̶e̶̶a̶̶k̶ ̶t̶̶o̶ ̶y̶̶o̶̶u̶̶n̶̶g̶̶e̶̶r̶ ̶g̶̶u̶̶y̶̶s̶a̶̶h̶̶!̶ ̶m̶̶y̶ ̶s̶̶h̶̶o̶̶t̶̶a̶̶c̶̶o̶̶n̶ ̶h̶̶e̶̶a̶̶r̶̶t̶. They're just like so cute, wish that Gilbert would win her over... And I think that the game heroine is the MC's past life best friend (Ichika) as for the evidence, it is most definitely because of what the MC said like she's a hardcore BL fan that's why she ignored the love capture targets but showed interest on one guy called Huey (a brother of one of the love capture target called Dante) because she was enraptured by his cute voice in her past life (?) g̶̶o̶ ̶s̶̶h̶̶o̶̶t̶̶a̶̶l̶̶o̶̶v̶̶e̶̶r̶̶s̶

[collapse]
Definitely recommended for reading. Very fluffy and comedic. There is something inherently simple and sweet in this story even as the MC strives to fight for her life. Well translated and easy to read too. For that please accept my sincerest thank you, translator (s) ! A solid 5 ✰ for this novel ♡ (> ਊ <) ♡ <<less
2 Likes · Like Permalink | Report

A nice, fun read. Whilst it doesn't try to reinvent the wheel, the story is endearing and never tries to pretend to be something it isn't. For example, the story never tries to portray the female lead as being a genius or good at everything. She has understandable flaws, with the right amount of cliches peppered in for good effect. In any case, be sure to check it out if you are looking for a fun, light read.
1 Likes · Like Permalink | Report
Advertisements
Leave a Review (Guidelines)
You must be logged in to rate and post a review. Register an account to get started.

Lord of Fire is a Gamer