Novel Updates
RegisterLogin
Theme
Search
Your changes has been saved.
Advertisements
The Incompetent Prince Who Has Been Banished Wants To Hide His Abilities~ The Strongest Sage Who Reincarnated Twice, He Wanted To Enjoy This Life, so Took It Easy and Was Banished From the Royal Family. It’s Too Late To Be Told Come Back Now Cause the People of the Territory Have Noticed His Abilities, and Won’t Let Him Return to His Family Home

Home >
Novel >
The Incompetent Prince Who Has Been Banished Wants To Hide His Abilities~ The Strongest Sage Who Reincarnated Twice, He Wanted To Enjoy This Life, so Took It Easy and Was Banished From the Royal Family. It’s Too Late To Be Told Come Back Now Cause the People of the Territory Have Noticed His Abilities, and Won’t Let Him Return to His Family Home 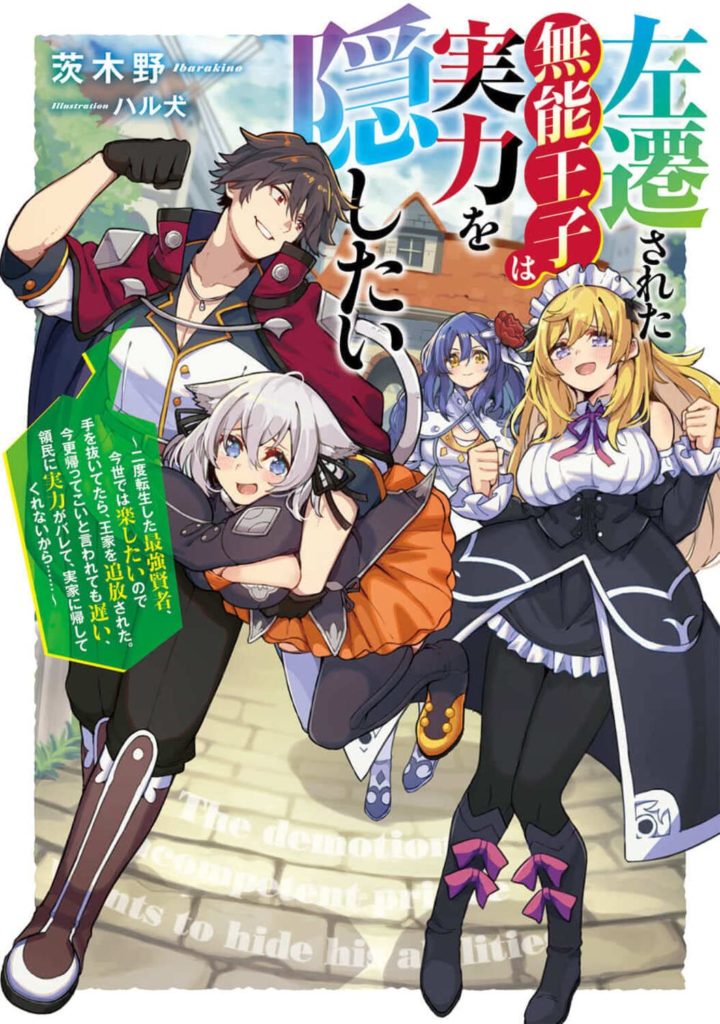 One entry per line
ハル犬

The main character, Noah, is a reincarnated person.

He was active as a sword saint in a previous life and as a sage in another. But he’s been forced to work hard all his life, and he’s sick of being a hero!

One day, Noah dies and wakes up to find that he has been reborn as a prince. He had a high level of magical talent and the swordsmanship of a sword saint, but he didn’t want to get busy again, so Noah pretended to be incompetent with all his might.

Then, on his 15th birthday.

A skill appraisal revealed that he was incompetent (actually, he was just hiding it with his concealment skill).

Noah was scorned and banished. As what seemed like a gesture of warmth, his father gave him a remote territory.

“Now I’ll enjoy my second life!” Noah was enthusiastic, but he didn’t know.

Actually, the territory was in the devil’s forest, which is said to be uninhabitable. But his past life was more advanced compared to this one, and the level of human beings in this world was lower.

Noah’s ability is revealed when he helps a girl who was attacked by a monster in the forest.

“Amazing!!! Noah-sama defeated a dragon with a single blow!”

“How did this happen? Ahhhhh!”

On the other hand, the royal family also noticed Noah’s ability and came to take him back, but it was too late.

At that time, Noah was already being praised by the people as the lord of the Demon Forest.

One entry per line
左遷された無能王子は実力を隠したい～二度転生した最強賢者、今世では楽したいので手を抜いてたら、王家を追放された。今更帰ってこいと言われても遅い、領民に実力がバレて、実家に帰してくれないから…

These are recommendation lists which contains The Incompetent Prince Who Has Been Banished Wants To Hide His Abilities~ The Strongest Sage Who Reincarnated Twice, He Wanted To Enjoy This Life, so Took It Easy and Was Banished From the Royal Family. It’s Too Late To Be Told Come Back Now Cause the People of the Territory Have Noticed His Abilities, and Won’t Let Him Return to His Family Home. You should give them a visit if you're looking for similar novels to read. Alternatively, you can also create your own list.
More Lists >>>

The translations are good but the MC is tr*sh. It's reasonably funny to see him try to be incompetent only to then succeed, but as the story goes on there's no character development and the MC intends to do things that would directly harm and/or kill those around him (thankfully he fails at being incompetent). If one views the chapters as silly one-shots then I would give this three stars as an alright time killer. But given that everything is linked together and that the MC intentionally tries to hurt those... more>> around him so that he can be viewed as "incompetent" makes me give it only two stars. <<less
0 Likes · Like Permalink | Report

The translation is good, the writing of the story is good, it's ok to pass time too, and I do get it's meant to be a comedy. However, the OP main character's attitude of being, and wanting to be, an absolute butt, then failing at it only to instead do good deeds and getting praised for it... is not funny or endearing at all. It just leaves me loathing the main character. There is nothing excellent here that would prompt me to go beyond 3-4 stars, and the MC drops my entertainment to... more>> below average, so it's 2 stars to me. It's not worst, for sure... just below average. <<less
0 Likes · Like Permalink | Report

How this was rated 4.1 I have no clue, I understand this is one of a million, I was a super op guy and then I reincarnated and just wanted to chill stories, but the two chapters I've read have been perfect microcosms of a lot of the flaws of these stories, the mc's brother Dava is the standard sibling, who got identified as a big boy class, and is super arrogant due to that, this makes him aggressively not a character, existing just to make the MC look good... more>> in comparison and then go "omg, my brother who I thought was a waste of space is actually super strong and all the waifus wanna copulate with him, this must be a lie and I will exact my revenge in increasingly idiotic ways and always lose because the MC needs to look epic to an audience of pre-teens". The MC himself is the classic too cool for school protagonist, who somehow lacks any logic despite living in this world for 15 goddamn years, the author's who write these stories believe that no-one who reads this will question the dumb questions the MC asks, how they are unaware of the world's magic level despite being royalty who has been educated by potentially some of the best tutors in the world and he thinks "oh yeah it's perfectly normal to just teleport out of a throne room with people in it, I should definitely showcase lost magic in front of people I've pretended to be incompetent too, that won't have consequences for my plan to chill" the idiocy on display is astounding, and finally we have breasts, just breasts, Laurie is just a walking pair of breasts that the pre-teens will pop a boner too, she will add f*ck all to the non-existent plot and the second it seems she might become her own character separate if the MC, the mc'll show up save the day and Laurie will reattached to his side. Finally, the regression of magic, that is present in nearly every single one of these stories. I despise this trope, especially when unexplained, we're left to wonder why and how magic has regressed with no explanation, and it's not difficult, you could have a massive natural disaster barrage, requiring society to be rebuilt by very few people, with the vast majority of their knowledge being destroyed, or maybe those who had powerful magic, had far too much influence and were using it for bad, so a massive revolution happened against these mages, and it was successful outlawing the use of powerful spells or getting too proficient at magic and there being a mass burning of magical books and scrolls to limit the power of mages, however some were not discovered and burnt, so people try to go find these scraps of ancient knowledge, if some random guy on novelupdates can think of this, surely it can't be hard? My final words of this far too long review is that reading the title I thought it might be funny bad or a parody, however instead of being funny it was just enraging, if you still want to read this schlock after reading my review, may you find help <<less
3 Likes · Like Permalink | Report

Quite a funny story so far, whatever he does to try to look incompetent he look like a genius so I wonder what would happen if he did try to look like a genius. With his family so far that was mentioned how did their kingdom not fail? The king looks like a guy who does whatever he wants and is always right even if he is wrong and won't admit defeat and his eldest brother just another arrogant guy who thinks the world should resolve around him. But they... more>> have one similarly that they overlook important things. And it was said that entire time he was in the castle he was pretending to be incompetent so he probably didn't even study. And living for 15 years considering that he lived 2 lives with the technology and power level similar and then suddenly dropping to a minimum is hard to adjust when you are already accustomed and don't know a thing about the new world. But there are flaws and the outcome is always predictable <<less
2 Likes · Like Permalink | Report

It's actually really funny, it starts up a bit slow but the recent chapters just keep getting funnier. It's hilarious how incompetent this guy is at being incompetent.
1 Likes · Like Permalink | Report
Advertisements
Leave a Review (Guidelines)
You must be logged in to rate and post a review. Register an account to get started.

The Great Vampire General is a...

Lord of the Ancient (古代の主)