Novel Updates
RegisterLogin
Theme
Search
Your changes has been saved.
The Card Apprentice 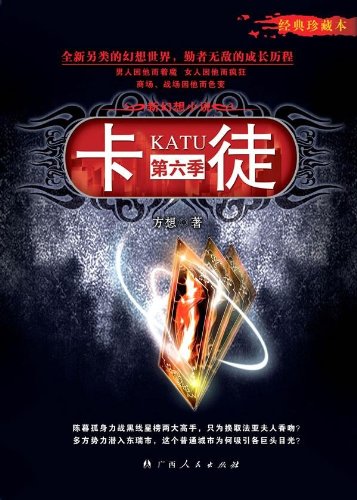 Status in Country of Origin. One entry per line
617 Chapters (Complete)

Claimed to be the greatest team in the history of the card film industry — “Mu Lei” is born. With even the elites of the academic world unable to decipher these cards’ structure, his powerful cards were able to unnerve even the federation, causing the greatest Card Creators and Card Fighters to grow frantic, triggering open battles and covert maneuvers among various interest groups — all behind the silhouette of Chen Mu. Although he was not the originator of the federation’s unrest, he was definitely the number one reason for continuously escalating it.

Through his exceptional intelligence and toughness, he evolved from the weak to the mighty. From a solitary life of survival to his collaboration with his friend to the team’s business of fantasy stories: As card films full of fantastic oddities flowed from Chen Mu’s hands like an unending stream, his own fighting strength rapidly grew. Fame, wealth, beauties, dangers gathered all around from far and near until finally, he became a paragon of inspiration to all.

These are recommendation lists which contains The Card Apprentice. You should give them a visit if you're looking for similar novels to read. Alternatively, you can also create your own list.
More Lists >>>

This was written a year before WOC and has the same core and I can only compare the two. I'm sure the author made many improvements after this first attempt, as WOC is brilliantly balanced and a MASTERPIECE. This here though,
... more>>
Spoiler

[collapse]
I really really hope that all the aspects it lacks will appear in one form or another... PS: How I hate people who claim for a novel to have potential just because it hasn't been ruined yet and thus give it 5 stars... How would you rate a great one which actually not only had potential, but developed it well? Still 5 stars? Well, what's the difference in rating then? None? Unbelievable.... <<less
30 Likes · Like Permalink | Report

Very satisfying. Not sure if it's technically sci-fi, though I guess the adage is true : "any technology sufficiently advanced enough seems like magic". There are some components that make me think of other novels - the training space he gets early on makes me think of Tempest of the Stellar War (another novel that I recommend, though it loses a bit of appeal by the last 2 volumes), the crafting makes me think of Heavenly Jewel Change - but the overall concept is sufficiently unique, interesting, and fun. It gives... more>> you that xianxia feeling of continuous advancement, self improvement, and exciting battles without the annoying repetitive elements and nearly copy/paste scenarios (so far, but then I'm nearly a third through). That for me makes this series very much worth my while. :) EDIT : Now at c267. This novel has surpassed my expectations. Even nearing the halfway point, the story feels fresh and flows along smoothly. I guess this goes to show that CN webnovels doesn't really have to really on an ad nauseam loop of tournaments, auctions, arrogant schools / personages to move the story along. Highly recommended. <<less
10 Likes · Like Permalink | Report

It's awersome. It's have a big potencial. I have read to chapter 20 with GT and is very interesting =) This novel for me, is the same of World of Cultivation, begin is slow, but in future... P.S. English is not my native language, so I'm sorry for grammatics mistakes.
9 Likes · Like Permalink | Report

Nearly finished with raws. It has decent story telling. Our main lead is not overly pretentious or arrogant and actually for once interacts normally with other characters, building strategic alliances while at the same time unwittingly gaining enemies from different factions left and right. Every side character is developed and has their own brains with them, and oh joy when strong women (not harem) are introduced in later parts of the novel. It's great. Only fault is it has a slow start, but it really shoots forward in later chapters.
... more>>
Spoiler

it has an extremely satisfying auction arc

😘Ratings out of five😘 Concept: 5 (cultivation technique is really unique, if you can call it that)
Main character: 4.5 (I like the mc's attitude, and for now there doesn't seem to be any mental issues)
Side characters: 2.9 (A bit shallow and typical, but their aren't many chapters yet)
Style: 3 (A bit average, but the story makes up for it)
World: 4 (ties in with the concept, a good take on the heiarchy) Not many chapters yet, but it has potential. (I meant to review... more>> this ages ago, but I kept forgetting...) 😑 <<less

2/5 Well below your average trash xianxia. A step below ATG. Very disappointing when considering this author's other works. WOC is one of my favorite novels on NU. The novel begins at a 1.5/5 and slowly climbs up to a ~2.5 by chapter 200+ before crashing down to 1 at the end. The author was clearly just trying to spam as many words as possible without much critical thought to overall plot lines or individual battles. I don't know why I kept reading this, and I don't recommend anyone else to do the... more>> same. In this novel world, most people battle using "cards". They are magical cards that go in a device on your wrist to cast spells of the xianxia genre. This is a story of a "genius" who is one of the few people in history that is both able to create top grade cards, but also battle as a top grade "ace" in multiple battle styles. The overall plot progression is actually pretty interesting, but you must skim massive useless info dumps constantly, while suspending disbelief at the constant glaring plot holes. So I'll first list a few of the problems I had with this novel. Cons: Now, if you can manage to skim through all of the worthless fluff without being too bored, or feeling your intelligence insulted too much to make it halfway through the story, then there are actually a few good parts about this trainwreck. Pros: Overall, would not recommend unless you are incredibly bored and desperate. <<less
6 Likes · Like Permalink | Report

Not bad, but not unusually good either; it’s got many shortcomings common among novels by inexperienced writers. It’s not very interesting, either. Sometimes, the novel does a good job at not overemphasizing, like how it doesn’t harp on how the cards make everything different in the world, but have been incorporated into life. Explanations of the character’s and world’s backstory are okay. They’re mostly paragraphs of description, given when the information is about to be required, rather than previously hinted at or gradually uncovered. The MC had a master for a short period, but their encounter and relationship are sped past; it’s just used to justify how the MC learned his skills, instead of exploring what easily could have been a powerful, motivating part of the MC’s journey. Other times, the hand-waving of explanations is kind of crappy. For instance, by learning more, the MC is able to reduce the “manufacturing cost” of low-level cards... somehow. How, exactly? It’d be an easy matter for the author to say that the special ink used for them makes up a major part of their cost, and by understanding different schemata and becoming more precise and efficient, the MC creates non-standard, simpler designs which use less ink, and therefore cost less to produce. Instead, there’s no explanation. The inattention to necessary details, while spending paying much attention on unnecessary things, is one of the novel’s shortcomings.
5 Likes · Like Permalink | Report

This novel is in a very weird place for me. The concept and story of this novel is very interesting and not like any other novel I read before. But at the same time it gets very confusing and hard to follow the more you read. I'm not sure whether this is due to the quality of translation for this novel or the actual plot line but it just seems like its all over the place and very difficult to keep track of. I still plan to read this because I... more>> really do hope it gets better but if it doesn't I plan to just wait and binge read it after its finish or just drop it. <<less
3 Likes · Like Permalink | Report

Long chapters, so tons of content to enjoy. For me this novel is a good find, and I think there is a good amount of elements that set it apart from other webnovels. I like the realistic balance of powers. I'd recommend this over your average face slapping fluff fantasy novel easily. I'd recommend it to those willing to invest themselves in an interesting world. If you don't feel it from the start, I suggest you put it down and try it again some other time. You deff need to be in... more>> the right frame of mind for this one. <<less
1 Likes · Like Permalink | Report

i enjoy this but as a new reader you have to know its only 617 chapter the early parts are more enjoyable than the later half as its a rush to end the series with lots of loophole and time-skip with no detail explanation.
0 Likes · Like Permalink | Report

Well, at first, I was skeptical, but it got more and more interesting. There are boring parts, but the overall development is good. It can be a bit messy/complicated, but I prefer to think that the setting and politics are vast and intricate. It's not easy to predict each main antagonist's plots. Of course, there's still some shallow face-slapping meant for entertainment. I think it develops closer to WOC's style as the story goes on. The MC isn't stupid, just lacking knowledge, and the side characters remain almost as vibrant as... more>> they did in WOC. The side characters are memorable enough despite having so many. The novel moves a bit slow, especially in the technical parts (I skimmed those, haha) but the wait is worth it. <<less
0 Likes · Like Permalink | Report

Well written, a nice mix of getting stronger, fighting, scheming and reactions. What I really like is that the plot flows freely an doesnt really care about previously established encounters. For example the MC makes a promise to character A but then is forced to leave the town and will not be able to fulfill the promise. In other novels character A would come back and play an important role, but in this novel you never know if someone is important or not, resulting in a refreshing story. All that bothers... more>> me is that at the beginning the dimensions of time and money are not really thought out well, but this gets better in the later parts. <<less
0 Likes · Like Permalink | Report
Leave a Review (Guidelines)
You must be logged in to rate and post a review. Register an account to get started.

They Were All Nobles
Advertisement