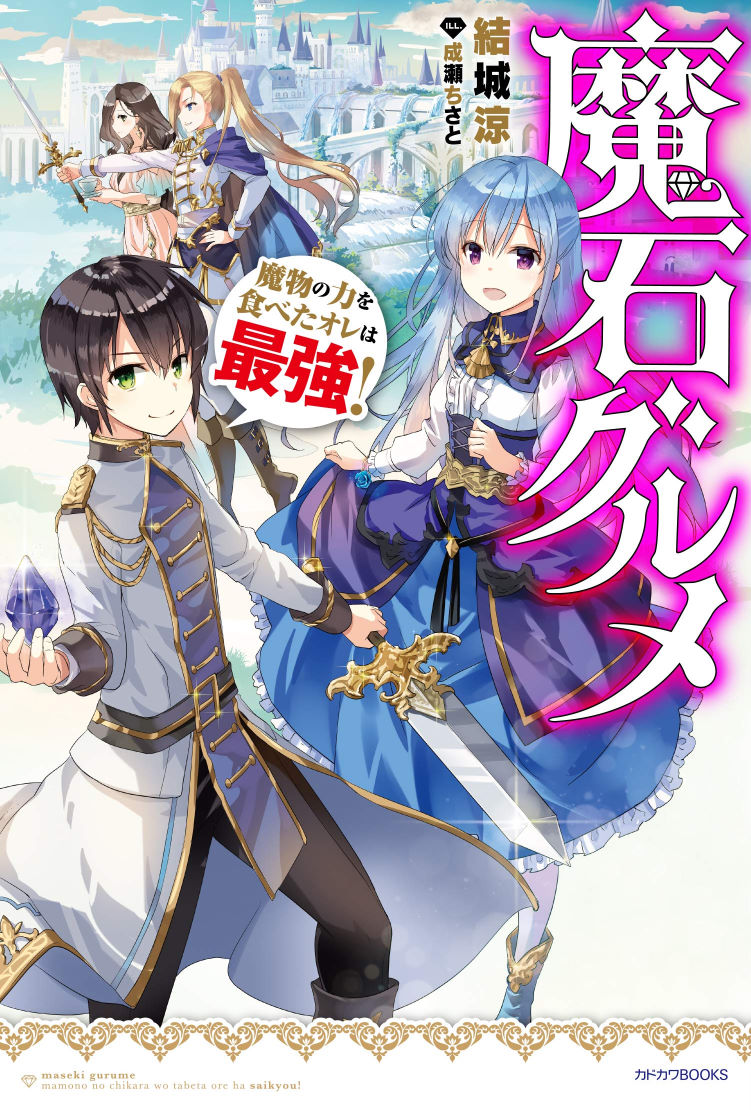 Status in Country of Origin. One entry per line
9 LN Volumes (Ongoing)

Thanks to the Goddess, he was reincarnated into nobility! That should have been great―― but the skill he got, 【Toxin Decomposition EX】 was simply too plain, and he was made fun of everyday at home……

However, at one time, he noticed he could eat the magic stones of monsters with that skill and absorbs their abilities, furthermore, he was informed he was the prince of the neighboring country!

What awaited him at the royal castle was an environment where he could train and experiment with the abundant amount of magic stones, bringing out his strong potential――and finally, even acquiring the ability of the legendary monster, the Dullahan!

Surrounded by an assertive fiancée and a clumsy knight girl, the new life for the boy who will become a “King” begins!

These are recommendation lists which contains Magic Gems Gourmet (LN). You should give them a visit if you're looking for similar novels to read. Alternatively, you can also create your own list.
More Lists >>>

Well, honesstly, the writing of the LN is good, the story is quite interesting, the characters are average though. So why I bring myself to give it a 2 star ? Well the moment I read the book, I thought something was fundamentally wrong and I really can't bring myself to enjoy the whole story with such a flawed point. And this is truly personnal, some people won't mind this I think, but for me it was a huge plot hole in term of world building. ... more>>
Spoiler

To recap, there is a contract between two countries. The princess of country A marries a noble of country B and so country A can mine some petrol like stone in country B. At some point a child (the MC) is born. Ok no problem so far, but the father in question quickly gets a second wife, a second child and treat his first wife/child really badly. So the author wants us to hate the father in question for his horrible behaviour. Seems legit.

At some point, princess of country A has enough and decide to return with her child in country A. Fine normal. According to the official of country A, treating the first wife and child badly and getting a second wife is a breach of the contract between the two countries. So the father is in the wrong. Seems logic here.

Then suddenly we learn the MC isn't born from the father. The mother isn't human, but actually a dryad. The dryad specy has some special characteristic such as if they mate with a personal they can only mate with this person for their whole life. The princess didn't love the noble of country B so she was using a sleep spell everynight so that they don't mate. Morever the other ability of dryad is to be able to create an offspring the same way an apple tree produce an apple (the dryad still need the blood of the opposite s*x though)....... Wait what?

In short, the princess of country A not only betrayed the bethrothed vows, she use magic on her husband to not sleep with him and their child isn't actually their child but something similar to a clone. And the husband is in the wrong for getting a second wife and a true descendant ??? What kind of irreasonable bullsh*t is this. How come nobody in the f*cking country A tells her she has a screw wrong in her head? Actually everybody tells her " oh my poor girl, it was hard going there, you aren't in the wrong, it's your former husband that is horrible". Nah girl, you destroyed the contract between the two countries first by not upholding it.

[collapse]
So yeah, with such an enormous plothole like this. I can't bring myself to give it more than 2 star. Totally personal though. <<less
19 Likes · Like Permalink | Report

I have been following Kari Translations when they start this LN's WN. I have been wondering why there was no update for WN for 5 months. So, enough reminiscence. This story is pretty entertaining when they translate the WN. Good enough English where you can understand and enjoy the story without cringing or annoyed at the confusing wordplay and one of those situation where you thought 'Wait, whose speaking right now?'. If you didn't know if this is your cup of tea, read a few chapters in WN from Kari Translations and... more>> make your choice by continuing the LN. <<less
9 Likes · Like Permalink | Report

dont agree with zakuu, its a wierd novel, well the ln is more hashed out than the wn, only grips are the how long the author takes to bring all the wierd things together that tie into the story, alot of unexplained stuff starts to make some since several hundred chpts of the wn into it, from the wn only seemed that it was difficult for the author to tie in some things and finish the main story, but tried to extend it and is working ok but some of... more>> the after/continuation of the story as teh MC grows up is grabbing at least on the wn, u could read the trans manga to catch up on wn trans but wn does add some more details, essentially keep in mind that said country MC was born in is a human supremacy country so alot of problems gets explained later on and reason for MC to move to mothers home country gets explained over time also why they are more advanced... in short give the ln a chance or wait for more translated is done too at least be able to finish main story to appreciate author, at least the author advances the age/timeline of MC instead of the MC staying shota type like alot of other authors leave the mc <<less
3 Likes · Like Permalink | Report

Disappointed. With the premise, I though that the protagonist would grow by working and hunting monsters, then raise his low status to the top. But no. It turns out that his low status wasn't actually low, and that his mother is kind of a b*tch. Frankly, the reveal of his race and birth was a low blow. Him being a prince from the most advanced and powerful country completly ruins the starting background, as he is going to have the best people to support him, plus money for high grade magic stones (the... more>> first one he receive is actually a treasure). Then, we learn that his race can only have one partner by binding their lives together during mating, yet there is harem and polygamy tag, so that aspect is going to be discarded later by some bullsh*t ability. <<less
2 Likes · Like Permalink | Report

Story of novel is good I was reading with smile on my face. If you looking for light, kind novel with good romance (in my opinion) part and very lovely atmosphere its my recommendation
1 Likes · Like Permalink | Report

Story and writing is pretty good. My only problem is that story often focuses on non-essential things. It's like you are playing some shooter but 80% of the time you are spending on inventory management and running from one point to another. ... more>>
Spoiler

for example everything about his school is pretty much useless. Including information about his bodyguard. MC has skill to absorb power from mana stones. So you would thing that they will feed him best mana stones? - Nope. He gots some super powerful dullahan skills so you would expect he will be training them - nope. Instead he just goes to school and it's not even explained what he is learning there.

[collapse]
Also there were few complains about how he was born and his mother. And I think it's unjustified
Spoiler

This was political marriage to inferior country, to man with way inferior status. It's also explained that at the beginning she was doing this to simply check how was this guy. So yes when you look at this like on simple marriage - it looks ugly. On another hand if you look at this like on a part of business deal - there is nothing special about using your skills to gain advantage over inferior business partner. She is shrewd but she isn't really bad.

If you were in her shoes would you really sleep with the guy?