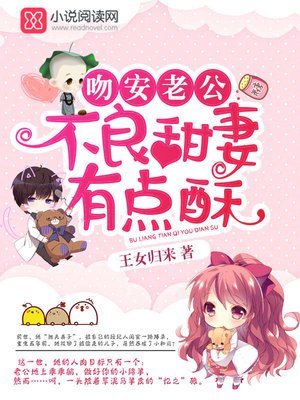 One entry per line
王女归来

Status in Country of Origin. One entry per line
980 Chapters (Completed)

“Husband, your wife has lost, worth tens of billions, do you still want it?”

“Don’t want… didn’t you say that you will support me? So I transferred all the assets to your name.”

Before she was born again, she ‘a blind toss away’, and was killed by her praising agent; after rebirth, she deeply realized that the biggest advantage of being blind was: being able to tease the arrogant husband at any time and any place, plus a sign for Mengbao Express.

In the past life, she loved others, was tempted, and wanted to have a divorce agreement with him.

One entry per line
吻安老公：甜妻有点酥

Love Scar: Be My S*ave (3)
Sweet Husband Pampers His Wife (2)
The CEO’s Villainess Childhood Friend (2)
She Become Sweet and Cuddly (2)
Loser In Love: Shut up, B*tch! (2)
Rebirth of the Film Emperor’s Beloved Wife (2)

These are recommendation lists which contains Kiss Husband: Sweet Wife Is a Little Crisp. You should give them a visit if you're looking for similar novels to read. Alternatively, you can also create your own list.
More Lists >>>

This novel has a total of 980 chapters but each chapter is really short. At first I expected it will be like Trial Marriage but it's not that interesting. The interaction of family of 3 is cute especially the little bun. Unlike Trial marriage where the plotline and character entwine each other, it doesnt apply here. Once done is done and the schemes is sorted relatively fast except for the everlasting white lotus fake BFF with lifeforce of an undying c*ckroach. How the biatch schemes exposed also not as meticulously explained as... more>> in TMHNWH. But if you like something easy to disgest not too much thinking then this is for you.... <<less
12 Likes · Like Permalink | Report

This is a funny relaxing with less tension. I only mtl this novel so I might miss or misunderstand some part ahem ahem ML loves n dotes on MC. Plus with the infinite sensible n cute little bun. About the bun: ... more>>
Spoiler

the little bun was stolen at birth by the b*tchy woman. That woman actually plan to throw the baby bun into a river but an old monk saw n stopped the woman. The old monk adopted n raised the bun, he teach the bun martial art, way of the monk, cooking, etc. N yeah he also told the bun women are tiger which eat children. When the bun asked the monk what mom is, he told the bun, mom is poisonous n scary than tiger. The bun stay with the monk until he was 4 and half year old when the MC found him, pretty much he ran crying n even more crying when the MC told she is his mom lol. Then the MC talked to the old monk. It seems like the reason the old monk told the bun to stay away from women n mom is scary cause the b*tchy woman claimed she was the bun mother when he stop her from throwing the bun into the river so he did that to protect the bun. The MC then played a record of the b*tchy woman's voice n the monk confirm it same woman so the MC explain that the bun was stolen n she is the real mother.

It's sad, later the old monk die of illness (??) Or old age (??). When the MC just take the bun home she was surprised n ask why the old monk let the bun cook since he was so young the bun said because the old monk want to prepare the bun when he alone (the old monk know he will die soon (TT).

This is a really good novel to read so much that I've MTL the remaining chapters that aren't yet translated. Even though 980 chapters seems long but each chapters is quite short. Also, what I like in this novels is that there is a doting ML and a cute little bun. Aside from this, there is no huge misunderstandings, only sweet interactions between the ML and FL.
5 Likes · Like Permalink | Report

Go Author-sama, go! ??? The translation is well and good! The Romance is not so slow and just right. Already in chap 21 and most of her grievances had been revealed. I just wonder how she will do her revenge! ???
4 Likes · Like Permalink | Report

This was such a cute story. MC and ML are very much in love and shower us all with dog food throughout the novel. Their son is just the cutest! In-laws are very supportive and finding lost families as well. Very short and easy read to get through in a relaxing manner. Though there was the common tropes where husband is rich, long lost relatives is rich and MC became very skilled in martial art after learning it in a very short time period even if it's from a expert. Also... more>> the ending was a little rush to me. Like majority of the romance novel, they were trying for a baby (which you know they are going to get), but the ending just cut off right as everyone found out she was pregnant. Had hope the author at least wrote one more chapter to tie that end where she give birth at least. <<less
3 Likes · Like Permalink | Report

This is one of my fave novel about rebirth in modern day. It wasn't your typical b*tch-stepmother-reborn-stepdaughter kind of story. I like how the Author play twist and turns about the plot. I reccomend this. Hope that many readers can find this. And I hope that the story can continue to it's awesome plot. I hope midnightrambles translate this story from the very beggining.. I always reread stories I like.
1 Likes · Like Permalink | Report

I really enjoyed the first half of the story. It has the right amount of suspense, romance and the MC's approach towards her rebirth is satisfying. It's a little hassling to change the sites for reading (wordpress then patreon then mtl). This is worth 5 stars at first, then 4 stars after I found those reasons listed below. I'd say it's worth reading up to chapter 720 then following that, skim through or just drop it all together. It's going to be super dragged out afterwards. I just ended up giving 4 stars because I truly enjoyed the first half. The latter chapters are only worth 2 stars because author kept nerfing great characters and making the storyline annoying. Now, time for the rant:
... more>>
Spoiler

MC maintains close contact with a guy who likes her. The two of them go to small "dates" and even went to an amusement park BY THEMSELVES. She's a married woman with a child in kindergarten!! She even acts sweet with him during meals and still allows him to get closer to her even when she's aware that the guy likes her! They were even caught in a hugging position by ML! It's so hateful.

Another thing I hate is author does not have a concept of male and female having planotic relationships. Even the most pure friendship ends up being ruined by the author. This author makes every guy fall for the MC. Even characters whose interactions with MC are irrelevant and shallow act like his love is so deep just from those miniscule interactions. This doesn't only apply to MC. I think every male and female that interacts in this story would have some sort of nonplatonic connection.

[collapse]
Lastly, ever since ML had s*x with MC for the second time, he began to ignore this thing called CONSENT. MC will say no, he will ignore the rejection and then proceeds to have s*x with her (MC will then give in) *eyerolls. This happens repeatedly and it's very irritating. Basically, after they started having sex, all the romance in the story became s*x scenes. It's no longer the heartwarming type. <<less
1 Likes · Like Permalink | Report

Story is good. Both ML and FL are likable. Plot though cliche not boring. FL is not only passively reacting to every problems but sometimes actively scheming against everyone who hurt her. Though many schemes are not detailed, it is entertaining if we don't dwell deep on the logic. Perhaps the glaring fault the story so far has is that author tries to extend the novel and make some antagonist to live like an undying c*ckroach. Especially main antagonist without sufficient background, influence, money or criminal knowledge, she can escape... more>> under surveillance of ML the richest man in the country and constantly find enemies against MC some that even international police cannot find. Especially her death. That is the only time I feel like dropping the novel. Bcoz of how forced and nonsensical the situation was. Apart from that romance is good. Monk baby is cute as well. Supporting characters are likable as well. <<less
1 Likes · Like Permalink | Report
Leave a Review (Guidelines)
You must be logged in to rate and post a review. Register an account to get started.