Novel Updates
RegisterLogin
Theme
Search
Your changes has been saved.
It’s Not Easy Being Your Love Rival’s Big Brother 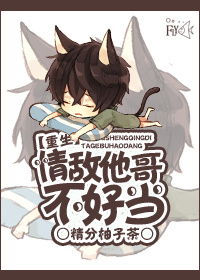 One entry per line
精分柚子茶

Status in Country of Origin. One entry per line
Completed (58 Chapters + 2 extras)

The 27-year-old Wei Han is a slightly fat, slightly chicken-livered, and slightly foolish, pure-hearted and besotted top, and his sweetheart who had been together with him for seven years, in the end, was stolen away by Qi ZhiFan one morning.
Deeply broken-hearted and in despair, he went overboard with binge eating, and ended up pathetically choking to death…

Luckily, he received a second chance, yet his timing, position, and destiny all got warped, and the him who returned to being twenty followed his remarried mother into the Qi family, turning into Qi ZhiFan’s non-blood-related older brother.

Well, Wei Han swore that this time, he must alter his dumped-as-cannon-fodder fate, and since he’s become his love rival’s big bro, he can definitely torment this scumbag little brother to death, restoring his position as the rightful top and quickly carry his bottom home!

However, why is the development of the plot spiraling further and further out of his control?
Why is Qi ZhiFan looking at him with a scorching, burning gaze, acting more and more questionable ( ⊙ o ⊙ ) eh?!
Thus, Wei Han was pushed down into an official bottom…

One entry per line
情敌他哥不好当

These are recommendation lists which contains It’s Not Easy Being Your Love Rival’s Big Brother. You should give them a visit if you're looking for similar novels to read. Alternatively, you can also create your own list.
More Lists >>>

Write a Review
33 Reviews sorted by

I started reading this because I thought the premise was interesting but I find myself not liking the MC at all as time progresses. He's really childish and stupid in my opinion ... more>>
Spoiler

like the moment he decided to write all his grievances against the ML in a book, labeled with an obvious name, and then starting immediately by mentioning his past life I was like, oh damn this guy is that type of dumb huh

[collapse]
and it's just, I get it's not meant to be a story hugely on plot or anything meaningful, and that's fine, it's cute and a bit cringey but funny so I'll keep going but hopefully the MC starts looking toward the ML a bit nicer
Spoiler

I mean, he knew the ML was hiding his low blood sugar condition and actually spilt it over a public chat/forum which is SO not cool, like that's legit not okay wtf especially after promising his step dad and all

[collapse]
update: the relationship gets better a few chapters after this which makes it easier to enjoy. I like the stuff that's hinted to be happening with the side characters, the story seems to really be kicking off at around chap 20 <<less
1 Likes · Like Permalink | Report

has lots of cute and laugh out loud moments. Humor is subjective, so I guess some people do not like this type of humor, but it fits my tastes. With that said, the characters do feel a bit 2d. And that's okay! Not everything has to be deep with a meaningful backstory. I enjoyed this for what it is--a fun story. I've even reread it, and it's still as enjoyable the second time around. I will probably reread it again in the future. Thanks as well to the translator for... more>> the nice translations. recommended! <<less
1 Likes · Like Permalink | Report

Haha so far loving it. I just wonder if we would get more insights about past Zhifan? Stealing MC’s love away and indirectly causing his death?
1 Likes · Like Permalink | Report

I don't really have many complaints regarding this novel but that's about it. It's pretty average and the MC is kinda hit or miss, you either like him or you don't. The ML is hard to like in the beginning, as he had a very arrogant attitude and was just rude. He later comes around but he's somewhat hard to tolerate in the beginning.
0 Likes · Like Permalink | Report

I got a bit annoyed when he spilled MLs medical condition just because he's annoyed at ML.

[collapse]
Well, the story is fluffy and funny but I still find some plot holes
Spoiler

[collapse]
and the ending
Spoiler

I just want a closure on what happened next to their parents. Did they accept them??

The first part of the story is great. The way the ML and MC interacts hooks me to the story. Although as time pass by, especially when they are together already. The interactions became monotone to the point that I got bored and I want to drop the novel but at that time there are still 15-20 chapters left so I decided to finish it. Also the way they solved their problem regarding being brothers. The way it is not describe properly annoys me. Tbh, I didnt got a proper closure... more>> about that part. It just reverted to being fluffy and somewhat sappy. <<less
0 Likes · Like Permalink | Report

First of all, I almost drop this novel. Why? Coz at first I couldn't stand the simpleness of MC (This more likely due to my low level of tolerance) ... more>>
Spoiler

this last till ch. 19 But the story start picking up after ch. 20 (again, this's as per me, not others opinion)

However this's a funny story and it made me laugh. Sweet & fluffy ~ ML is possesive and annoyed with several numbers of his love rivals. A very caring man with sharp tongue. MC has good perseverance and a hard working towards his goal in order to change his life after rebirth. Both MC and ML are pretty much straight forward when it comes to expresses themselves once they're in relationship.
Spoiler

there's also another gay couple in this novel. The uke (bottom) is a good friend of MC. They also have good story

Cute and fun read. The translation was decent if a bit stiff sometimes. In particular, the nicknames didn't really come across as well as it does in Chinese (the pun nicknames really didn't come across or get explained really well)
Spoiler

The writer not getting a partner in the end was too sad. And the full coupling up was a bit much.

4 stars! Taking away 1 star because I read this in Chinese a long while back but it didn't hold my attention long enough to finish. Glad to see it translated completely. Overall, a sweet, silly sort of love story with fluff and comedy but just a tad too much drama (I dislike all those 'love rivals' popping up, okay mainly just that 1 annoying person but argh, and the miscomm).... more>> MC is a tad to naïve at times but I liked the almost slow burn sort of romance he had with ML. Overall, the book has 2 official couples and 2 more not really described ones. Worth the read if one is looking for a relatively chill modern day romance. <<less
0 Likes · Like Permalink | Report

It’s really nice that the story not only focuses on the main cp but also features a lot of the side character’s love lives ie. Chengrui, Chenghui, Chuanyao, and Leng Yan. I would’ve loved to know more about Six Hot’s love story seeing as he is so desolate lol. I have to say that I enjoyed the early part of the story more than the latter since it was kind of heavy after, missing of the silliness in the beginning. I still very much enjoyed overall though. I just really hope... more>> we at least get an extra for Six Hot or maybe even Ou Yizhe and Shu Yi. <<less
0 Likes · Like Permalink | Report

I really enjoyed this little gem of a novel. It was thoroughly refreshing to read a story where the main couple were secure in both their sexuality and their masculinity; when it came time to consummate the relationship, the only struggle was for who's the pitcher. In the end (giggle), the one with more skill came out top (titter) !
0 Likes · Like Permalink | Report
« Previous 1 2
Leave a Review (Guidelines)
You must be logged in to rate and post a review. Register an account to get started.