Novel Updates
RegisterLogin
Theme
Search
Your changes has been saved.
Advertisements
I’m A Doll, But The Tyrant Is Obsessed With Me

Home >
Novel >
I’m A Doll, But The Tyrant Is Obsessed With Me 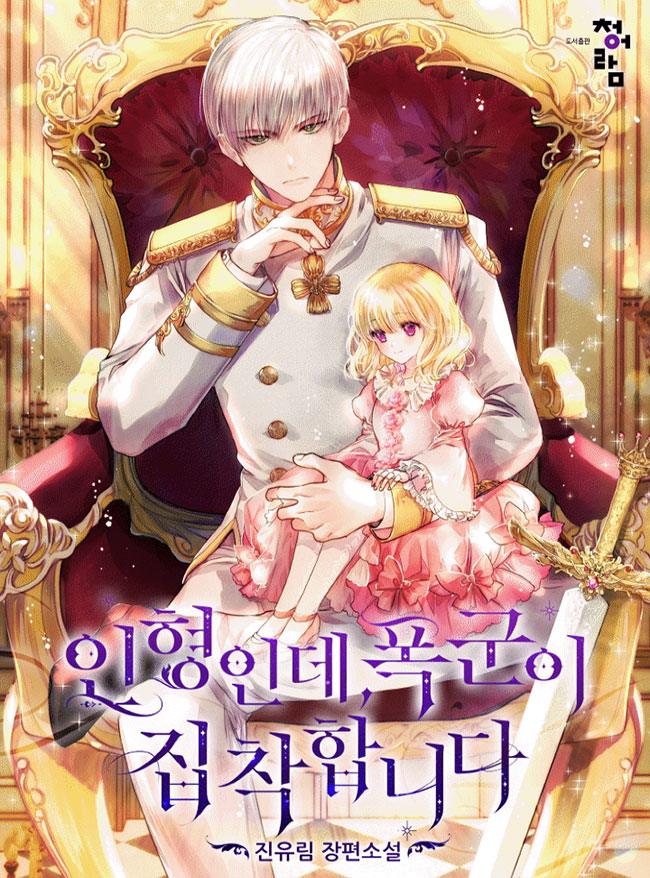 Status in Country of Origin. One entry per line
133 Chapters (Complete)

Others usually appeared as human when they possessed a character in a book, but I possessed a doll.

It was also a favorite doll of the tyrant whose neck went flying because of the male lead.

‘I’ve already died once, but I don’t want to die again!’

To survive, I must edify the tyrant.

To do that, I must first move my body… What? Oh, it’s moving?

“Are you really Chloe? No, who are you?”

A young emperor of the Burgundy Empire and a tyrant with the end faith of dying. Reclaim my body while edifying him!

The hair was not black.

Instead, it was shiny gold. It was the same color as the doll.

“…Chloe, are you really here? But why do you look like a doll?”

From the time the doll moved its hand, he had an expectation that Chloe might have been in it.

In such a situation, although it looks translucent, there is a person who looks exactly like a doll, so it is worth expecting that it was Chloe.

Because in the end, people just believe whatever they want to believe.

“I am not the princess.”

His eyes greatly shook at the firm answer.

These are recommendation lists which contains I’m A Doll, But The Tyrant Is Obsessed With Me. You should give them a visit if you're looking for similar novels to read. Alternatively, you can also create your own list.
More Lists >>>

I really like it, a bit different to other knovels cuz our FL is a soul inside a doll and the only one who can see her is the our tyrant ML who turned into a simp cuz of our FL. I like their slow but cute romance and no our FL is definitely not white lotus. I like that the OGFL is also not white lotus as far as I know, and since our FL and ML romance is blooming and ... more>>
Spoiler

[collapse]
So I'm hoping it won't get boring. I'm also hoping we'll get to see romance between OGFL and OGML. Tho I'd like to have more threatening villain as the current ones isn't really that much and it focuses mainly on
Spoiler

them trying to find a way to make our FL human

So far, this series has proven to offer a refreshing amount of weirdness for the in-a-novel transmigration isekai subgenre. Our MC has possessed a porcelain doll that belonged to the deceased younger sister of the mentally ill emperor Declan who died saving his life seven years prior. She is mostly an onlooker, but this has also enabled her to notice a strange energy around Declan, leading to some questions about what the hell is going on. Also, she is beginning to figure out that she can exert willpower to move... more>> slightly, allowing her to communicate on the most mundane level with Declan. There is a sense that her ability to interact meaningfully with the world will also become more advanced over time as well.
To Declan, his characterisation is compelling because we learn in these first few chapters what major events have shaped his psyche. He is grieving the loss of his beloved sister after she died saving his life from an assassin's arrow. His only relation beyond this is childhood friend (origML) Mason who is trying to support his friend but has to contend with Declan's mentall illness problems which usually result in self-destructive behaviour and destructive as a whole to the empire that Declan heads. The two young men (both are around twenty years of age) have their own battles to contend with and this brought this to blows during the original timeline. All in all, I am really digging what I've read of the Mystical Merries translation provided by Effe and Nabi. Well worth the read! <<less

Very enjoyable read. Lot of cute interaction but not forgetting background explanation and story progression. So far (c15) the story is focused on MC (Doll possessor) and ML with ocassional shenanigans from Emperor butler, Noah and flashback about the Princess and her doll, Erica. While other character of original novel only mentioned briefly.
9 Likes · Like Permalink | Report

I love this story! First time reading novel then FL transmigrated into an object. Its really refreshing reading not ab villainess/revenge.
I find their (FL and ml) interaction really cute, how ML already scared to loose her, can't wait till he will able to feel her touch, like right now he can already feel warm in her hand. Maybe she will take a fully human form soon??
6 Likes · Like Permalink | Report

I trust you! I trust only you in this whole world! She says as she begs ML everytime not to kill or hurt anyone like as if he has no control over his actions and needs to be reminded not to kill these audacious people who keeps coming in and bothering him because she’s so insistent on not hurting any of his enemies godddd white lotus annoying shes not even funny or witty or anything just annoying

I love this. So much so that I don't care giving 5 stars even when the translation is far from being finished. The premise is extremely interesting in this sea of novels that all seem to be way too similar. Not only that, but is executed extremely well. The interactions between all the characters are never awkward and seem very natural. I especially love the chemistry between our FL and the ML. The FL doesn't have a doormat personality and talks back, even scolds the ML earnestly sometimes. Their bickering brought a... more>> smile to my face every single time, they have such great chemistry. All in all, I can only recommend. <<less
3 Likes · Like Permalink | Report

I don't wanna upset the translator for bad reviews but I just gotta say it. 😭😭 At first the story is going okay not until that scene, it just suddenly feels like everything the FL said about protecting the ML and always being with him are just her being pretentious/hypocrite. Anyway, I'll just read this again when more chapter comes out.
0 Likes · Like Permalink | Report

It is one of the best K novel. It deserves a manhwa. I laugh so hard reading this, the story is so unique. Idk if the genre should be horror or comedy🤣 because imagine seeing a walking doll or seeing the emperor talking to the doll or the wind🤣 I disagree with @anggr291 saying MC is white lotus ... more>>
Spoiler

First of all, MC was stoping ML to start a tragedy (war). MC was send to that world to fulfill Chloe's wish to save ML. If ML killed one of the high ranking noble without reason, the nobility will use it to bring down ML the emperor. Second ML also wanted to kill ogFL before MC stop him because it would result is war between 2 kingdom since ogFL is a princess. On the original story the nobility and another kingdom work together to end the notorious emperor who kill people without reason.

So instead of direct killing. MC soul who could go out of the doll was invisible to others except ML. Was following the enemy, evesdroping and collect evidence so ML could charge them then they would have a reason to kill a criminal and Duke Otien will little by little lose its strength.