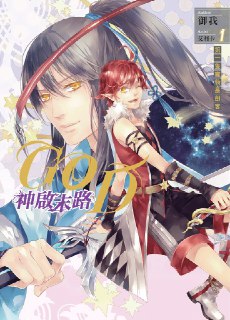 One entry per line
Yu Wo
御我

One entry per line
銘顯出版

This is a tale of blood and tears about collecting pets.

In his entire life, the greatest ambition of the free-spirited little devil, Shooting Star, is to collect all sorts of beautiful pets.

Elves and angels are definitely on the list. Can legendary mermaids be included too? If so, how about a dragon as well?

It would be better to start the collection with this amber-eyed swordsman!

Shooting Star: I’m just an honorable, veteran member of the Appearances Association. Is wishing to collect beautiful pets against the law? Since when did I end up riding the luxurious, one-way train to doomsday? Can I still disembark right now?

Even if GOD says that doomsday is approaching, pets still need to be collected!

These are recommendation lists which contains GOD. You should give them a visit if you're looking for similar novels to read. Alternatively, you can also create your own list.
More Lists >>>

I might come back here to edit this review after my broken heart heals (unlikely), I recover my sanity (very unlikely), or if Yu Wo really manages to rewrite a good chunk of it (praying for this). First off, this series was 11 novels long, at least the old edition I read from was. Yu Wo did her usual amazing, fantastic job on exactly 10 out of 11 of those books. But. What happened to the last novel?? No, really, what happened??? Below is my rant of future tidings, so please do not... more>> venture into it if you don't want any spoilers.
Spoiler

It felt like she was purposely making everything super dramatic, and I did see this in her other series, but for some reason instead of giving us a HE which made all the suffering worth it, it became an OE?? And, in my opinion, a very weak OE.....??

Anyone read LSK? Got to the point where poor Sun thought he killed everyone? Yeah, this happened here too, but in here everyone actually died??!!

Dan dies riiiight in front of Saya as a hostage, and he bleeds to death. Haha. I should have realized something was wrong then, but I just brushed it off as the trope where a beloved chara dies.

After that. Or, before that. Back in the beginning we first meet Shooting Star's fourth older brother, Feng Jin. Feng Jin proclaims Shooting Star is his nemesis (like what Saya is to Dan), and he dotes on him. Pretty sure he's Shooting Star's favourite brother.

Well, guess what??? HAHAHA yeah it's all a lie. Feng Jin's real nemesis is their oldest brother Ri Xiang, whose nemesis is Shooting Star. But. But, after everyone finds out, the whole demon race wants to kill Shooting Star so they could crown their newest demon king (I think because a nemesis is a demon's only weakness, so they want to get rid of Shooting Star), and Feng Jin...

OF COURSE HE GOES TO KILL SHOOTING STAR TOO.

I sat through an entire chapter where Shooting Star resignedly begs Feng Jin to at least spare his friend who came to protect him, what the heck. And then! Before they could sort out their issues (actually, they can't because to demons the only thing they cared about was their nemesises), FENG JIn DIES?? Shooting Star is so sad.

Shooting Star finds his own nemesis too, and she's this undead army captain his oldest bro gifts him. After being concerned about her for a few short chapters... nothing happens?? Shooting Star even orders her to commit suicide in front of him at the end?? Shooting Star, are you sure she's your nemesis whaaat.

Alan, Yaya, Siming, they all turn into dust and dies in the final battle. All the enemies are dead too. All of the members of this adventure group Shooting Star became part of when he got separated from Alan and Bai Saya for 3 years (LSK vibes anyone?) died too. I'm pretty sure Bai Saya was the only one left at the end, but he ends up dying in front of Shooting Star too. BTW, Shooting Star's biggest bro and his first general (whose nemesis is also Shooting Star, they died too haha).

And then Shooting Star kills himself? I think. Was cringing too much by then. And then we come to the last chapter... where Bai Saya wakes up to his alive master!!!

Yu Wo, what the heck.

Turns out, only Bai Saya and two side side siiiide characters (we only see one of them like for 2 chaps) have any inkling to what happened in the past timeline. Bai Saya finds all his previous companions, enemies and all, and creates this huge adventuring team/group/company. The only person he can't find is HAHA, Shooting Star.
He's all sad when one of the members bring in their newest member, dun dun dun, Shooting Star! Who demands to be head since the company was named after him (Bai Saya you sentimental dunce), and Bai Saya agrees. AND THEN. IT ENDS. JUST LIKE THAT.

All those loose ends just got discarded??? In the end, Alan was just as important as Saya to Shooting Star! Alan, the life-loving elf, would kill thousands for him! And now, their bond just went poof?

How about Feng Jin, that terrible brother? Shooting Star still isn't his nemesis, and he's still gonna betray Shooting Star in 3 years!! No tying that up??

How about poor big bro and first general? Shooting Star's own nemesis, Ke Xing?? What happened to all of them?

I was so disappointed you can't even believe. I really hope Yu Wo writes a more satisfying ending in the new version. This was my favourite novel of her's, even on par with LSK, and just. After that ending I kind of wished I never read it...

For anyone reviewing or rating this novel please pay attention, this is the 2014 rewritten version by Yu Wo. So instead of 11 volumes it’s changed to 3 and the story’s improved by 200%. All the chapters are really long, it takes me about 25 or 30 minutes to read one, so don’t worry too much about it being a short read. And the translation is 11/10 because PR! Are awesome.
3 Likes · Like Permalink | Report

The MC is a troll who likes to full around and colect pets (in the form of people :D)... he is very strong and likes to run away This novel so far is super funny (and later we will have cute overprtective dad moments from a side character <3)
3 Likes · Like Permalink | Report
Advertisements
Leave a Review (Guidelines)
You must be logged in to rate and post a review. Register an account to get started.

Travel to Another World because ROB...

The Rising Of The Fallen Warlord
Advertisements