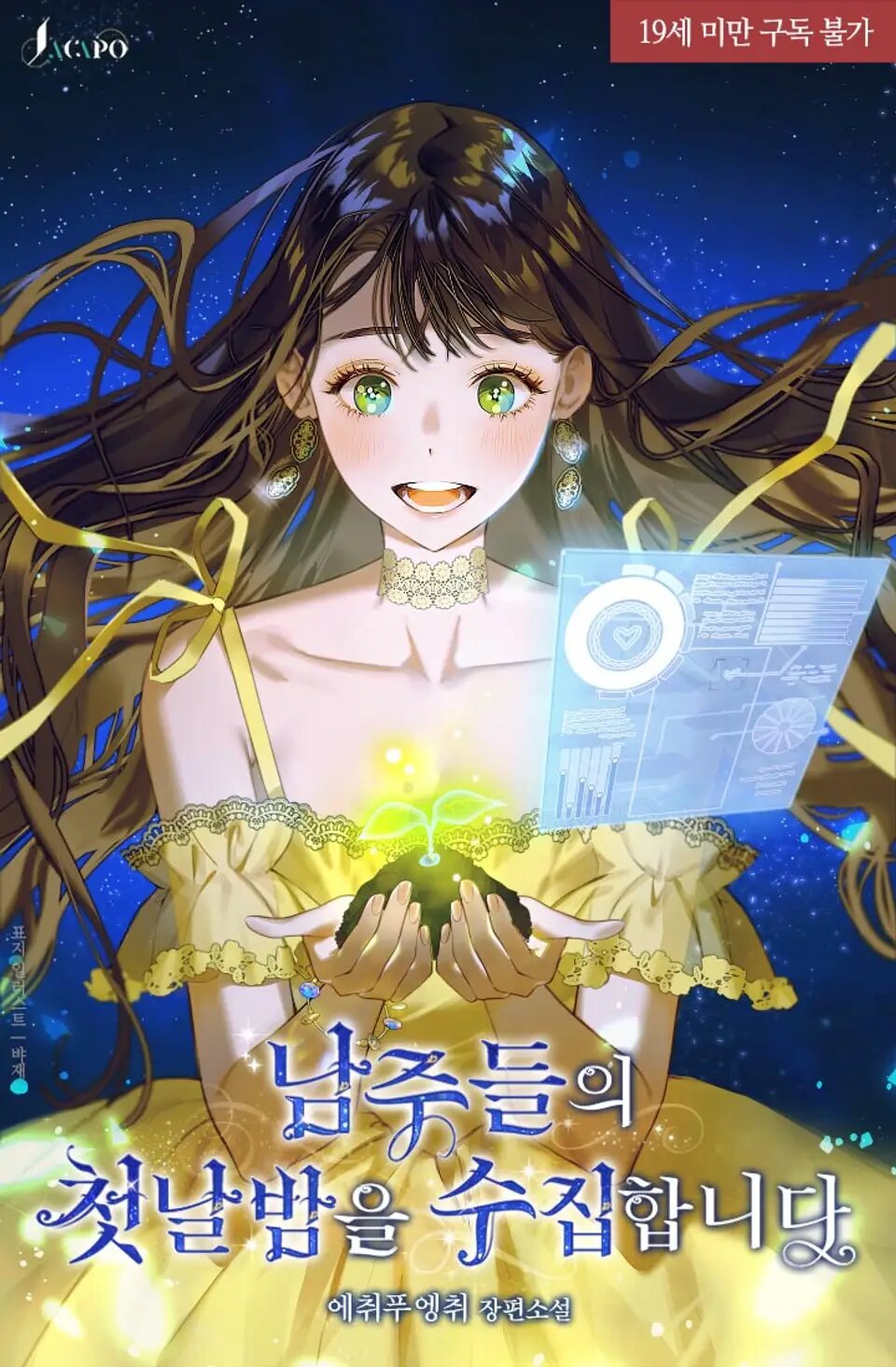 One entry per line
Yuchae
뱌재

Status in Country of Origin. One entry per line
319 Chapters (Ongoing)

One entry per line
Dacapo
RidiBooks

Sylvia reincarnated into the game she played before she died, and that game was called 〈 Leveling Up By Devouring Handsome Virgins 〉

“You were so lazy throughout your life that you were supposed to be sent to Slothful Hell.”
“What? Slothful Hell? What’s wrong with living however I want?!”

Living her life with YOLO as her motto, Sylvia was about to be thrown into Slothful Hell after she kicked the bucket.
But if she didn’t want to go to hell, she’d have to capture handsome virgin men so that she could ascend to heaven.

“Master, are you awake?”

From the adorable butler who sometimes turned into a wolf,

To the sweet in the day yet beast in the sheets priest,

“Hey… Are you crying because you like it so much?”

And even the criminal underworld’s successor who was innocent and naive in bed.

Well-prepared for Sylvia according to type, the handsome virgin men appeared before her.

“I’ll do my best to level up by devouring these handsome virgins!”

Waking up as Cinderella’s Stepsister (2)
Saving The Blackened Male Protagonists (1)
The Holy Temptation of the Devils (1)
When the Witch is Imprinted (1)
Why, Can’t You Eat? (1)
You are the Supporting Role (1)

These are recommendation lists which contains Collecting the Male Leads’ First Nights. You should give them a visit if you're looking for similar novels to read. Alternatively, you can also create your own list.
More Lists >>>

This series is surprisingly entertaining. It’s definitely a slow burn, the world building takes up dozens of the first chapters. It’s like an isekai RPG with a thirsty female lead and s*x is a way to progress the game. Came for the smut, stayed for the plot. Kudos to the translator Miki! It’s incredibly well written. My only wish is that it were translated more per week, as right now it’s 1 ch/week so it’ll take almost 5 years at this rate to catch up...
1 Likes · Like Permalink | Report

Pretty good. The other review stated how the FL is too perverted but I honestly don't mind. She's shameless and scummy, which is quite refreshing from the many dense and saint-like FLs I read a lot. Only a few chapters translated but I see a lot of potential, definetly waiting for the next update.
24 Likes · Like Permalink | Report

The setting is a bit ridiculous, but actually that’s what makes it fun, the MC has as many steamy thought as what you’d expect from a teen aged boy and she smash crabs for a living when she’s not cleaning church : it’s a s*upid video game for pervert - it would be absolutely casual if the MC was a guy ! But the MC is a girl... Obvioulsy, what the MC demonstrates, is that the same kind of « dirty » mindset is absolutely possible a female : so... more>> Is there some kind of social training in seeing the other as a s€xual object ? Maybe it actually made me wonder how much it a part of our education that makes us chocked while the same profile is attributed to a female - further than that, there’s seem to be a boy culture of building and sharing H fantasy, they are expected to hide some kind of magazines, or share some juicy activities : it’s « normal « - while girls don’t or seldom have this kind of personal or group activity, and surely would be called names if they did :/ further thinking about gender equity : yes, maybe girl sharing p*rn is a way to bring the issue about and the problem associated with that culture - but it’s also sharing a vision of intimacy laced with taboos and violence, where pleasure will always be associated with dirt and pejorative labels as it reside in dark and covert space - It’s by no way building a culture of respect, enjoyement and freedom outside of any « sin » talk, but actually banalize some unpleasant extreme - meh, it’s really hard to beat toxic culture and build true alternative ! now I might be curious to see if it’s a pure inversion of typical boy harems stories or if there’s a bit more to it - It’s a bit hard to know if there’s enough plot to carry on as the MC is truly unpleasant and there are little clue about her growing a better mindset in so little chapters - There’s obviously a carrot and stick system : she has to grow out of her laziness and she also need to rich a proper level to act on her fantasy, so it’s not all hopeless <<less
14 Likes · Like Permalink | Report

Alright, the MC is obviously not the brightest of the bunch (bordering an air head). She got a warning yet a second later she completely forgot about it and just do what she pleased. I don't know if I should call her ignorant or just... well.. didnt care enough to give a f**? The 19+ scenes is still hot af tho, once it began, it would take several chaptere and rounds, and it's also satisfying.

On the way to chapter 200, and I guess the identity of the male leads is as follows:

The one I'm really curious here is how MC would balanced herself between all that male leads since almost everyone are possessive af. I got the feeling that MC didn't really care about what would happens if she get caught and just enjoying every smut she can take. At least she remember to save the game in case her reckless decision lead her to death ending (which is happen a lot since she always choose her libido over her reason. Which is kinda refreshing. Lol.)

The story kinda dragged on tho, I was on chapter 181 and it's still on the beginning of the dragon route. The current raw I have is only up to chapter 220 and I just hope that I can at least reach Sevis route before it. I'm curious how MC would deal with Sevis since he practically aware that MC got entangled with another men.

[collapse]
#####Original review: Here what I can say after reading till chapter 51: ❇️This novel is really funny and interesting. And don't let that innocent looking cover fooled you, the MC is thirsty af. 🤣 Her funny thirsty comment made me blurted out laughing in the middle of crowded cafe. At least she's true to herself and not feel ashamed to acknowledge it. ❇️MC is your typical ordinary woman who lived their everyday life (on earth) without any grand ambition or excessive goals whatsoever. But personally, I like her character because she is... ordinary. You can easily related to her character if you're a lazy bum with not so subtle inner naughtiness. ❇️ I like the otome theme in this novel, and even tho MC is desperate, there's actually some plot development and not just endless s*x scene... or at least not until chapter 41 when she FINALLY get it done (yay!) And it would last through 10 chapters. Lol. Not continuously ofc, but it's frequent enough as if author want to compensated her/his readers for waiting till chapter 41. ❇️The 19+ scenes is detailed and hot. *Fan myself* and it was done in exciting way. I love the fact that the male leads is innocent at first before turning into a beast mode. It's satisfied my dom side and my sub side perfectly. ❇️Currently on Noel's arc but I heard there would be 4-5 male leads in this stories so I can't wait to read more. ❇️On one point I seriously pitied MC when most of her attempt ended up in failures even tho the game clearly asked her to do all that 19+ thingy as the main driving plots. But oh gosh! by all means it's not that easy to do! And that's what made this novel more amusing. I can't help but laughed when MC suffer a set back. It just so funny that I can feel her frustration seeping through the pages. 😂 well at least now she got one male lead to enjoy'😏' and I can't wait to see how she would catch the others. So far, I really like this novel and would recommend it to anyone who want to read light novel with extra smuts here and there. <<less
11 Likes · Like Permalink | Report

This one cracks me UP. Girlfriend is THIRSTY and while she definitely isn't the smartest, she's not dumb, completely oblivious, self-righteous, or mean. Sylvia is completely relatable, especially if you're kinda lazy, enjoy sex, and kinda just skate through life like me. She KNOWS she's lazy and just wants to enjoy her life, and doesn't lie to herself about being lazy and a little selfish. The game makes Sylvia work, and while she's annoyed by it she also just rolls her eyes and goes "Well okay then, I guess this is... more>> what I've gotta do. Fine, whatever, let's get this handled." and that is something I can feel on such an intimate level. I see other reviewers complain about Sylvia's dirty mind and compare her to a teen age boy and I'll be honest - I am a grown *ss woman, and *I* sure af have those thoughts too. S*x is something most people enjoy regardless of gender (not looking at you, Aces. Y'all got your own things you enjoy more, and that's awesome too) and women can enjoy and want s*x just as much as men. Teen age girls are just as dumb and horny as the boys, they're just quieter about it. I'm REALLY enjoying this one! Sylvia is SUCH a goofy hornball and it's refreshing to see a FL like that. <<less
6 Likes · Like Permalink | Report

I think this would be better if the FL wouldn't constantly want to lick her lips in heat whenever she she meet a handsome man. Like I get that this is a smut but why does she have to be built like a pervert in a bad way at that.
6 Likes · Like Permalink | Report

This novel is so much fun! It’s hilarious and sexy! It’s nice to see the usual tropes turned on their head. Yes men women can think like this too! Sorry if it hurts your feelings! Please support the translator on their ko-fi!
2 Likes · Like Permalink | Report
Leave a Review (Guidelines)
You must be logged in to rate and post a review. Register an account to get started.