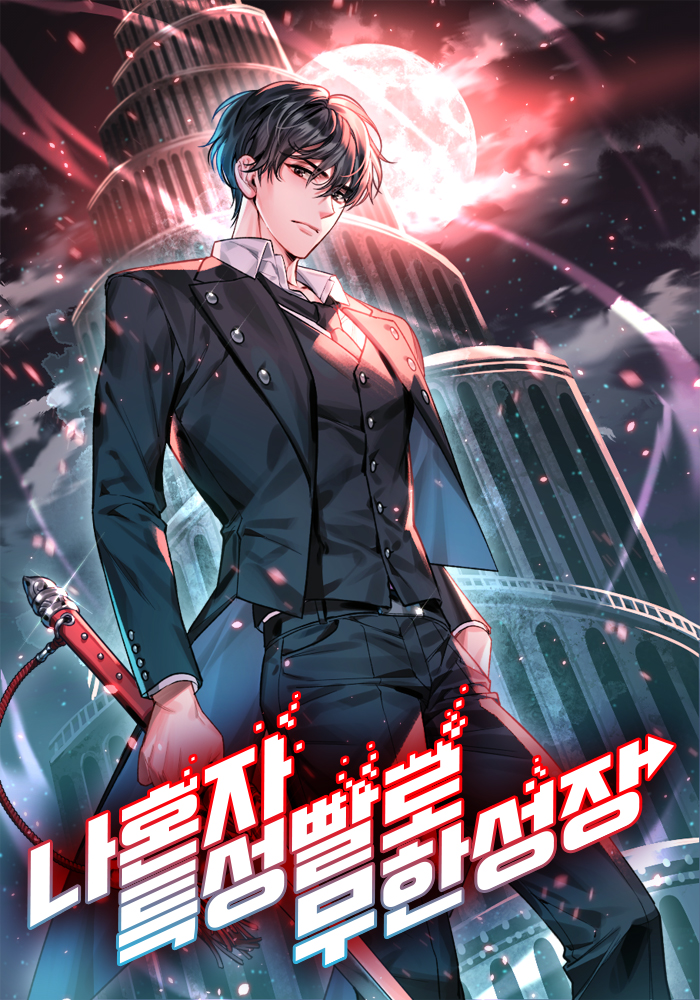 Status in Country of Origin. One entry per line
375 chapters (Ongoing)

I never thought I could become a hunter.

I never thought I would get the chance.

But that wasn’t true.

「 ‘Tower of Trials’ has selected all suitable candidates from Earth. 」
「 Please select your difficulty. 」
「The chosen difficulty will be directly proportional to your rewards. 」

I was given a chance now.

A special one at that.

These are recommendation lists which contains Boundless Necromancer. You should give them a visit if you're looking for similar novels to read. Alternatively, you can also create your own list.
More Lists >>>

Way too much time is spent on monologues explaining the reasoning behind his actions, when they aren't all that complicated. Also, it feels way too cheap having him gain 6 stat points from defeating one enemy he'd called "weak" 3 times before killing it. Considering he'd spent 7 years training without gaining a single stat point increase... The other thing is, who spends 7 years training without any sign that the training is working? Training is a process where you gradually improve. Your time gets faster, you can lift more weights... more>> / more times, you can work longer, you learn new moves and become able to use them in different combinations, so on and so forth. It's literally unimaginable to have someone go that far and then easily accept it when he's suddenly told to stop. The worst thing is, the motivation is just not believable - it would have been super easy for him to move on to a support role for hunters as soon as he understood he was not suitable. He would have had just as much ability for the purpose of the story, but he wouldn't be an insane ret*rd who spent 7 years trying to get stronger without anything to show for it. Ah, and I wouldn't mind it nearly as much if he wasn't basically the only character I could expect in the story, but it's a solo tower. There will probably be undead minions with quirky personalities, and cameos from other tower goers, but I see no reason to care about this character or what happens to him. He's not fun or funny. He's shown in just 5 chapters that he has no desire or ability to improve himself normally. And the author seems way too impressed with himself for the strategies the character takes... which so far are just copies of strategies characters in similar books have taken in the past. The translation seems decent enough though. <<less
25 Likes · Like Permalink | Report

The plot genuinely almost the same as TTTH. The differences are MC awakened as necromancer and those humans that goes to tower are awakened (but stat reset) and normal human. In addition, the knowledge of the monster in tower are known since the world has dungeon outside of the tower. The story is written well and the world background details are as clear as the day. I can't comment much since I read only 5th chapters but I bet 100 bucks that this book gonna be good.
9 Likes · Like Permalink | Report

Its 5 out of 5 for now. MC is OP, but isn't the strongest player as of yet in or out of the tower. Also like that the MC isn't evil or cold to be an edge lord. His singular goal was to fight monsters to stop tragedies which occurred when monsters first showed up. Even when he has to kill others it to survive, not to show his dominance or just not care at all. ... more>>
Spoiler

Currently he has to fight with himself over his feelings about the tower. He has gradually come to love the tower that has given him chance at last to grow stronger, but hates the tower for giving him no choice but to kill fellow humans from earth.

[collapse]
It's still a 5, but the novel's only real weakness is the author constantly having people praise the MC is a 1 in 10 billion genius when he's not. He's hard working and was blessed with a OP unique skill and another broken skill that compliments it, but that's it. He's more effort/opportunities than gods chosen one Luke characters treat him. <<less
3 Likes · Like Permalink | Report

Its so bland, everything about it is mediocre to the bone. Even the Protagonist is so boring, he gets lucky and the monologues about how different he is from everyone for a fourth of a chapter.
3 Likes · Like Permalink | Report

I honestly think it's a good read. Though the plot at the moment isn't the most original story out there, I like how the MC is solid and cautious with decent intelligence. I'm also interested in how the plot will develop since it's a bit different than the others. In addition, the TL is good so I look forward to the few chapters released every week.
2 Likes · Like Permalink | Report

Yet another dime a dozen Korean gate/tower fantasy set in an alternate earth. MC is tenacious and methodical and unfortunately a bit of an edgelord, which isn't really shocking but still disappointing nonetheless. All in all a decent time killer. It certainly doesn't reinvent the wheel or even bring any drastic changes to the standard formula but it's not bad.
1 Likes · Like Permalink | Report

MC is not anti-hero or evil or cold.
He is a good person. [ Don't forget this. It's important. He is not Messiah, but at the same time he is a good person you will find in any movie, is all I will say ]

[collapse]
Some things That I would like to clear:
Spoiler

> MC started off as a whimpering MC who I would say is a beta and.... basically I will say all the bad words to it. Author even describe it again and again, and focused on justice and humanity so many times in starting few chp that I almost dropped this novel.
> But MC grow up, from chp 30 you could see the change, and this change continue on. At least now he don't whimper and author is also not showing too many times. Like, MC: I can do this, but if I do, it will harm humans. So I won't. and so on. It would be ok, if he simply didn't do it. But author writing it in a manner to show me that MC did this for humanity, made me feel like, greater good, humanity, morality, FETTERS, fukin WILL OF FIRE. so that might be my personal problem. But I don't like such troupes.
But later it changed, that's why I started enjoying it.
>So author improved and MC also grow up, this growth would be finished at 30 chp and you will be able to see changes afterwards.

Purpose for me to clarify these were, These exact reasons were enough for me to drop it and some of my friends to not even try it. So, I think, by clarifying these things, people might wanna give it a try. That's all.
**Instead of writing a review, which literally give no fukin view and answer to the question I have. I like to explain and say everything I feel.**

[collapse]
---
Romance/harem- Till chp 63 which is latest in wuxiaworldsite, from where I read.
No romance or anything till now.
---
My take on it or what I think will likely happen in future, based on the vibe or understanding I got till now: Romance will definitely happen. MC is not a eunuch [ no referring to anything, I am just saying, he like girls and I feel when he grow more strong, he will encounter some girls who will like him and then slowly k-drama will begin ]
As for Harem, honestly no idea. It can go like, solo levelling and have only 1 heroine [ Which I would love to see ] or it can go on like, seoul station necromancer [ and have a tons of harem, which I will hate to see... but whatever ]
So harem is not sure.
---
His Nature: Good person, can kill enemy, can do things if needed, but have his own bottom line, of course enemy don't come within that bottom line.
----
Some imp. time stamps:
From chp 30, MC started changing. this novel got a bit interesting from chp 30
In chp 40, MC finally got skeleton summoning skill.
After chp 48, this novel kinda changed and become better. so I am enjoying it more now. And afterwards, my experience just kept on rising. I won't say it is like solo levelling, as they are too far apart. But still I will say, now this novel can barely catch up to such great novels.
I also liked the power system in this novel. -----
You will find more translated chp on Wuxiaworldsite <<less