Novel Updates
RegisterLogin
Theme
Search
Your changes has been saved.
Advertisements
As Long as You Have the [Shop] Skill, the Dungeonized World Is a Breeze ~The Bullied Youth’s Payback Lifestyle~

Home >
Novel >
As Long as You Have the [Shop] Skill, the Dungeonized World Is a Breeze ~The Bullied Youth’s Payback Lifestyle~ 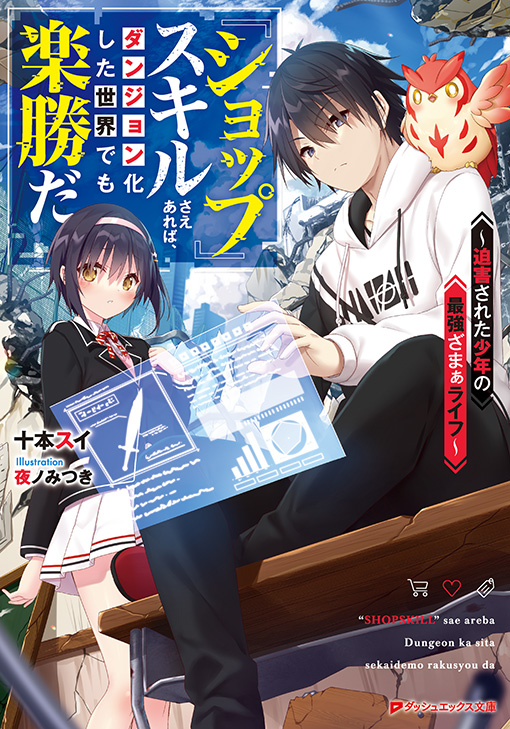 Status in Country of Origin. One entry per line
290 chapters (Ongoing)

I, Bouchi Hiro, was ostracized by the entire school because I stood up against the student who held an absolute power in the school. But no matter what kind of bullying I received every day, I never yielded. Today as well, I was getting beaten up behind the school building. But at that moment, I heard the students screaming―That was the moment when the world was transformed.

On the school grounds, the students were being attacked and killed one after another by monsters that seemed to have come out from an RPG. Using this opportunity, I managed to escape and returning back home safely. Then at that time, I realized that I had a strange power dwelling inside me. A skill called [Shop].

As long as I could pay for it, I have the ability to buy variety of items on Earth, and even fantasy items that couldn’t possibly exist on Earth. In this world, where humans were gradually being wiped out, I decided to make the most of my new skill to live a slow, comfortable life free of worries.

It was truly thrilling and delightful to see all the people whom hated and ostracized me being killed one after another because they didn’t have the power as I did.

This is the payback story of a boy who was once bullied, and uses his skill to take advantage of those who are now left with nothing.

These are recommendation lists which contains As Long as You Have the [Shop] Skill, the Dungeonized World Is a Breeze ~The Bullied Youth’s Payback Lifestyle~. You should give them a visit if you're looking for similar novels to read. Alternatively, you can also create your own list.
N/A

It seems like the author can't decide what to do with the main character. They want to have him do all sorts of things, so he keeps making up new identities. By chapter 50 he had 4 false identities all doing different things. Basically all the time is spent in one of these personas, and not as himself. It's like the writer wants him to be a loner, but then can't handle the fact that there would be no significant supporting characters. These identities are also all significantly older than... more>> the MC. It's like the author wanted to go with the standard "bullied high-schooler MC", but then didn't want them to be that young. <<less
1 Likes · Like Permalink | Report

As far as apocalyptic novels go, this one is not the worst I have seen for sure, but it's also not a good pick if you are selective and want a good writing and engaging plot. There are two main problems that were very glaring to me: The first problem comes from the Main Character, who is too cool with everything that's been happening for someone his age that's been living in modern society. It's a very unrealistic behavior, even more so if you consider that even adults wouldn't be able... more>> to keep a calm judgment when faced with such an unexpected situation. He's shown as someone just too detatched, even if you consider the bullying and what is known of him on those first chapters. In this case, the author would have been better using a Third Person Perspective instead of a First one. He probaly intended to make the MC as someone who lacked trust and was apathetic towards other human beings because of all the bullying, but not turning him into a sociopath, except that the way the MC describes his actions and thoughts just came out as bizarre in this case. The second problem is the lack of explanation for some very important knowledge the MC seems to have. It's just weird, for example, how he just decided that a place was a dungeon out of the blue and then, later, it was confirmed. Aside from that, there are other points where you feel like he has too much unexplained knowledge about what is going on and is too proficient in what he's doing. Aside from those two problems, the secondary characters are well written, with consistent personalities and actions that don't go too much out of reality, even when we're talking about the alternate personas the MC made. The world building is poor, and there's only a minimal desciption of the characters appearances. In short, it's a novel to read when you have nothing else to do. <<less
0 Likes · Like Permalink | Report

Man this MC is an angsty boy. This story is written with all the skill and plot of a thirteen year olds OC fan fiction. Uncaring, tough, disillusioned with the world. His only soft spots are for kids and animals. An adult could get brutally murdered in front of him and he wouldn’t care. But hurt a kid and he’ll kill you. For real this is s*upid. No actual human acts like this. Do yourself a favor and just skip this one.
6 Likes · Like Permalink | Report

GREAT MC and people don't like it because he don't thinks with his d*ck lol good start poor plot but only 49 ch for now waiting for the next anyone who being give up by humanity and society like this lost faith and for a long time trust me on this the title is... more>> the true. It's a real payback for last from the start he never give up nor ask for help and only count on himself so he's not a clicher op MC with d*ck for brain but just a human who lost his faith in humanity if you don't understand very well don't read but don't make a bat review because you live in rainbow fake world and go see harem pokemon novel then you don't have your brain too work and escape from reality have fun <<less
2 Likes · Like Permalink | Report

It's tr*sh. I'm not even referring to the apathetic to others MC, that would be somewhat novel and I like new things. It's everything else, the poor writing, plot holes, and inconsistencies that makes this unenjoyable to read. I've decided against listing in detail what I'm referring to because the story is simply too poor for me to justify spending time on deciding how to do so with minimal spoilers. I am disappointed in myself for giving it 45 chapters of a chance.
2 Likes · Like Permalink | Report

seriously, this novel good at first then it goes downhill. The only cause of this is due to the MC character who remain unchanged. ... more>>
Spoiler

the MC was described as a teenager who suffer a heavy bullying on his high school days. The cause of this incident was due to one of his class mate were a spoiled rich brat that arrogantly spread mischief to the entire school and the entire school community have been unable to help him. Since then the MC develop trust issue toward humans.

Then in a specific chapter, he manage to kill the rich brat due to his special power and the case of his misfortune days is over. However, his trust issue towards humanity does not disappear which resulting to not help anybody during world crisis was becoming annoying. It is disgustingly apparent on above chapters 30 when one of the client wife were kidnapped by thugs, he just avoid and treat it as not his problem. This makes MC a total idiot and naive

[collapse]
overall, it is a poor story. <<less
2 Likes · Like Permalink | Report

I can understand why this main character may seem to be a bit of an angsty teen who is trying too hard to be an edgy loner. However, this is still fairly early on in the story. I have not seen the raws so I do not know if the author develops the character in a good direction or not. However, the author has done a decent job of setting up a mentally traumatized character, even if unintentionally. The MC only has sympathy for animals and small children as he... more>> judges them to be innocents not yet molded by the cruelty of the world. The fact that he
Spoiler

uses his system to gain a loyal animal companion shows that he wants to receive and give affection.

[collapse]
Overall the story has not developed its plot much so it loses a star, but the protagonist can be developed in a good direction so 4 stars for potential. (Subject to change obviously should the author drop the ball with this character.) <<less
0 Likes · Like Permalink | Report
Advertisements
Leave a Review (Guidelines)
You must be logged in to rate and post a review. Register an account to get started.